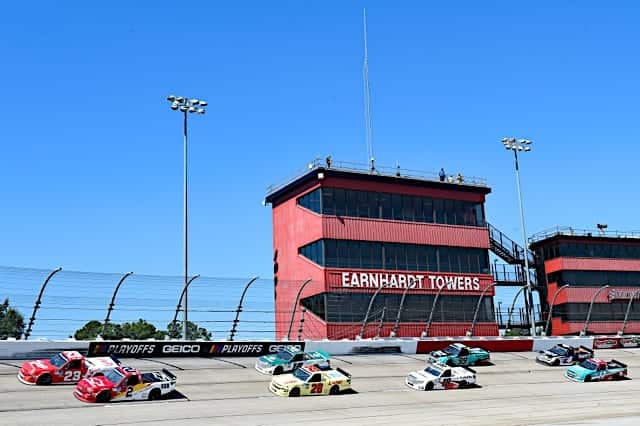 This weekend’s LiftKits4Less.com 200 marks just the eighth time in NASCAR Camping World Truck Series history that the division has visited Darlington Raceway and just the second time since 2011. Last year’s throwback event was won by Ben Rhodes, who already has two wins this season and heads to South Carolina second in points.

Plenty of other trucks will join the No. 99 ThorSport Racing entry at the “Lady in Black,” with a grand total of 43 trucks on the entry list. Three trucks, those of Trey Hutchens III, Ray Ciccarelli and Todd Peck, will automatically miss the race based on points.

As announced Monday (May 3), Raphaël Lessard parts ways with GMS Racing ahead of the race at Darlington. The departure, according to Lessard, is due to funding issues, and Xfinity Series veteran Ryan Reed will jump in the No. 24 for the race. Reed has 171 Xfinity starts to his name but just four in the Truck Series, half of those coming earlier this year at Richmond and last week at Kansas.

Parker Kligerman and Henderson Motorsports return for their fourth race of 2021. Kligerman has two top-10 finishes this year, coming home eighth at Las Vegas and on the dirt at Bristol. David Gilliland also returns to the series, making his third appearance of the season in David Gilliland Racing’s No. 17. Another driver returning to a familiar truck is Grant Enfinger, who is back in ThorSport’s No. 98.

Reaume Brothers Racing also welcomes back Akinori Ogata for his 11th career start in a truck; Ogata will drive the team’s No. 34.

Additionally, Erik Darnell returns to Truck Series competition for the first time since 2008. Darnell compiled two wins, 16 top-fives and 32 top-10 results over the course of four years in the series just past the turn of the century, and the now-38-year-old is set to compete in his first NASCAR-sanctioned event of any kind since 2012 in Niece Motorsports’ No. 45.

Drivers for Jordan Anderson Racing’s No. 3 and Niece Motorsports’ No. 44 trucks have yet to be announced.

The Truck Series takes on Darlington at 7:30 p.m. ET on Friday, May 7 with coverage on FS1.