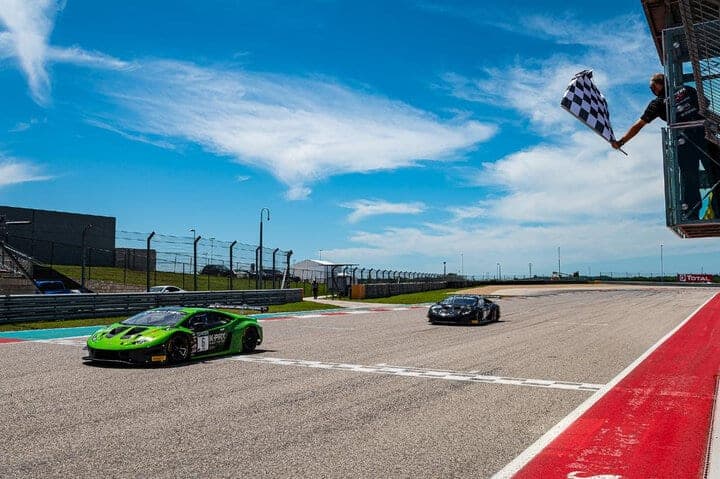 Saturday’s 90-minute race started under threatening skies with a light rain falling, but everyone starting on slicks.  Pepper started from pole, but Turner Motorsport’s Michael Dinan got a great start and took the lead from third on the grid in his BMW.  Pepper was disappointed in himself and immediately put the pressure back on Dinan.  At the beginning of the second lap, Pepper was able to outbrake Dinan entering turn 1 and re-took the overall lead.  Venturini moved into second a few laps later.

Once in the lead for good, Pepper slowly but surely pulled away from the pack.  30 minutes into race, he had opened up a lead of nearly 10 seconds.  Meanwhile, Dinan had fallen into a battle for third with HTP Winward Motorsport’s Russell Ward.

While the race started out in ok conditions, the weather radar was not good.  Heavy rains were moving in quickly from the west, forcing teams to consider their strategies.  With the heavy stuff not arriving early on, teams didn’t want to get in a situation where they stop for their mandatory pit stop and then it rains, resulting in a second stop.  As a result, everyone planned to stay out as long as possible, a strategy that could have disadvantaged Pro-Am teams since the Am drivers start Race No. 1.

Ultimately, that didn’t really matter as 20 seconds after the pit window opened, the skies opened and it began to pour at Circuit of the Americas.  As a result, most of the field came in for their mandatory pit stop at the earliest opportunity.  Pepper was ultimately the exception to the rule, waiting an additional lap before his stop.

There wasn’t that much in conditions in the extra lap, so it didn’t hurt the No. 3 team.  Caldarelli got in the No. 3 Lamborghini and exited the pits with a 15.6-second lead, more than the team had before the rains picked up.  HTP Winward Motorsport’s Philip Ellis was able to get out of the pits first and moved up from fourth to second., ahead of Turner Motorsport’s BMW with Robby Foley at the wheel.  Ellis and Foley quickly got into a battle for position, but Ellis was able to hold Foley off

As the race continued, the rains continued to pick up.  With heavier rain also comes standing water.  Eventually, the conditions just got unbearable.  With just under 15 minutes remaining, SRO America officials brought out the safety car.  Shortly afterwards, the race was red-flagged.  Under FIA rules, if a race is red-flagged beyond 75% of the race distance, it is considered complete, giving Calderari and Pepper the victory.

Ellis and Ward were second, followed by Foley and Dinan.  Venturini and Lewis were fourth.

In Pro-Am, a new team to the championship, Inception Racing, won the class pole with Brendan Iribe at the wheel of the race’s only McLaren 720S GT3.  Once under green, Iribe settled into a rhythm and held onto fourth.  When the rains picked up, he spun in turn 13 simply due to the lack of grip.  That cost him some time and dropped him to fifth overall.

Once Ollie Millroy got in the car, the McLaren moved back up the order.  He was able to run down Lewis, who was struggling in the wet conditions and took fourth overall away from the K-PAX Lamborghini.  Millroy was ultimately never threatened on the way to victory.  Wright Motorsports’ Jan Heylen and Fred Poordad were second, then TR3 Racing’s Giacomo Altoe and Ziad Ghandour.  DXDT Racing’s Colin Braun and George Kurtz were fifth in their Mercedes.

Sunday’s race was held under sunny skies.  No one had to worry about the weather.

Ellis won the pole for the race with Altoe alongside in the Pro-Am class No. 9 Lamborghini.  When the race started, Ellis was able to hold onto the lead.  Meanwhile, Altoe and Braun had contact in the Esses, taking both drivers off course into the paved runoff.  No one hit anything despite Braun getting all four wheels off the ground at one point.

The contact allowed Heylen to get himself up to second and pressure Ellis.  Ellis was extremely aggressive in protecting his position, much to the consternation of everyone around him.  Heylen was able to get the lead briefly, but lost it in turn 12 on the second lap.  DXDT Racing’s Ryan Dalziel threw himself into the battle as well.

Meanwhile, the K-PAX Racing Lamborghinis struggled with a lack of straight-line speed.  Caldarelli started eighth and dropped back as far as 13th.

14 minutes into the race, Heylen was finally able to take the lead from Ellis with a move to the inside on the run to turn 12.  Ellis again defended harshly, all but pushing Heylen off the track in the process.  Once in the overall lead, Heylen pulled out an advantage of a couple of seconds.  Ellis was then able to run Heylen back down as the tires wore down.

When the pit window opened 40 minutes into the race, K-PAX Racing’s Lamborghinis were running sixth and seventh.  Lewis chose to pit as soon as the window opened to put Venturini in the car.  Caldarelli stayed out for a couple of extra laps.

The pit window was not without problems.  Compass Racing had issues getting the wheel nut for the right front wheel to attach.  When Rodrigo Sales left the pit lane, the wheel started trying to separate from the rest of the car.  Eventually, the wheel came off in the Esses.  In addition, DXDT Racing’s No. 19 Mercedes driven by Erin Vogel suffered a mechanical issue and stalled in the pit lane, ending their day.

A full course caution in the middle of the pit window results in complete chaos.  As a result, SRO America officials waited until after everyone made their stops to bring out the caution to go retrieve the wheel and Sales’ No. 77 Acura.  It’s a situation that was quite similar to what NASCAR chose to do during the Cup race in Kansas on Sunday.

During the pit window, HTP Winward Motorsport got the No. 33 Mercedes out first to retake the overall lead with Ward at the wheel.  Poordad was second, then David Askew and the K-PAX entries of Venturini and Pepper.

When the race restarted with 30 minutes to go, Venturini made quick work of both Askew and Poordad to move up to second.  Pepper followed half a lap later.   Meanwhile, Ward pulled out to an advantage of a couple of seconds over the field.

That advantage was short-lived.  Pepper first passed Venturini for second in turn 10.  A lap later, he ran down Ward and snatched the overall lead.  It took Pepper seven minutes to take the lead from fifth on the restart.  Venturini passed Ward a couple of corners.

From that point on, it was a K-PAX battle for the win, while Ward stayed within striking distance in his Mercedes.  On the final lap of the race, Venturini got a run on Pepper on the long straight leading to the tight turn 12.  Venturini managed to outbrake Pepper and take the overall lead.  He only managed to lead the race for about 45 seconds, but that was all that was necessary for Venturini and Lewis to claim the win.

The margin of victory was a little more than one-third of a second over Caldarelli and Pepper.  Ward and Ellis were third.

In Pro-Am, Poordad ended up with the class lead on the final restart.  However, it did not take long for Kurtz in his Crowdstrike-sponsored Mercedes to get to the front.  He shadowed the two K-PAX Lamborghinis.  When Venturini was able to make the move in the carousel to get past Poordad, Kurtz swept past as well to take the class lead.  From there, Kurtz pulled away to take the Pro-Am victory in fourth overall.

Braun and Kurtz’s margin of victory was 11.243 seconds over Heylen and Poordad’s Porsche.  Iribe and Millroy finished third, followed by Askew and Dalziel.  Zelus Motorsport’s Jason Harward and Madison Snow were fifth in their Lamborghini.

The 2021 Fanatec GT World Challenge America Powered by AWS schedule originally had two weeks before a trip to Canadian Tire Motorsport Park for the third race weekend of the season as part of the Victoria Day SpeedFest.  However, that race weekend has been cancelled due to the COVID-19 pandemic.  As a result, teams will now be off for over a month before returning to action at VIRginia International Raceway the weekend of June 12-13.