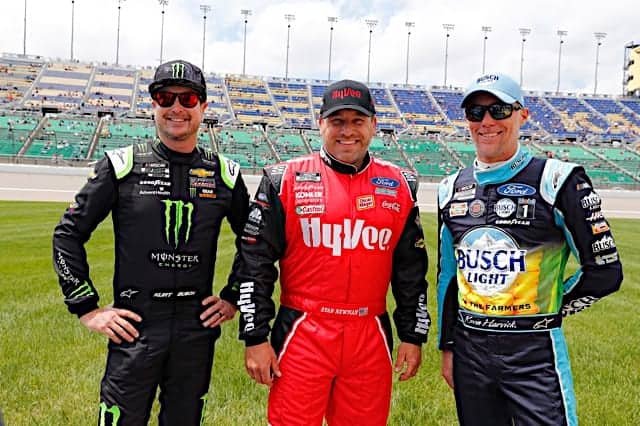 In 2009, Kyle Busch became the first driver since Cale Yarborough in 1977 to win a Cup race on his birthday. However, after winning this weekend at Kansas Speedway, Busch is the only driver in series history who is undefeated on his special day. Since Busch joined the Cup tour in 2005, a race has been held on May 2 twice, and Busch has won them both.

It does seem a little surprising that it doesn’t happen more often. But it is rather difficult, simply because drivers don’t get many opportunities. A driver’s birthday will only fall on a weekend every four or five years. Then they have to hope a race is scheduled for their day. It doesn’t do much good for the birthday to be on a Sunday if that weekend’s race is Saturday night.

Hall of Famer Jeff Gordon never accomplished it. Being born on August 4 and winning a lot in the early years at the Brickyard, it seems like it should’ve happened at some point. But alas, Gordon’s wins came on August 6, 1, 5 and 8. The race was only held on the 4th one time, in 2002, and Gordon finished sixth. The next time May 2 will be on a Sunday? 2026. Just wanted to put that out there. Anyway, here are some more notable numbers.

Busch’s victory made 2021 the 17th consecutive year that he has won a Cup race. This ties him for second all-time with David Pearson and leaves him just one season short of equaling the King, Richard Petty, for the most. Petty won a race each year from 1960 through 1977. Other notable drivers’ winning streaks include Dale Earnhardt with 15 years, Rusty Wallace, Ricky Rudd and Jimmie Johnson at 16, and Gordon at 14.

There have been 31 Cup Series events at Kansas and three drivers have started every single one. Ryan Newman, Kevin Harvick and Kurt Busch have taken every green flag at the 1.5-mile oval. Harvick has three wins, taking the trophy in 2013, 2016, and 2018 while Newman won the third time out back in 2003. Oddly enough, Kurt Busch doesn’t have a victory at Kansas. The best he’s been able to do is a pair of runner up finishes in 2013 and 2017. Maybe 32 will be his lucky number.

Matt DiBenedetto had never finished in the top five in back-to-back races in his Cup career until his fourth-place finish this past weekend. Coming on the heels of a fifth at Talladega, it’s a significant swing in momentum for a driver who looked like he would need a ladder to get out of the hole he dug for himself early on in 2021.

William Byron continues to churn out top 10 finishes, placing ninth at Kansas. It’s the first time a driver has finished in the top 10 in nine straight races since Jimmie Johnson finished the 2010 season on a nine-race top 10 streak, which culminated with his fifth consecutive championship.

There have been four races on 1.5-mile tracks this year, with a total of 1,126 laps run. Kyle Larson has led 509 of those laps but has managed to close the deal just once. While he did win the first such race at Las Vegas, the three since have turned out to be massive disappointments, as circumstances have prevented Larson from leading the final lap each time. This week, it was a bit of contact in the closing laps and a brush with the wall that ended Larson’s shot at the win.

Only six currently active Cup drivers have won at the next stop on the tour, Darlington Raceway. Kyle Busch, Denny Hamlin, Harvick, Martin Truex Jr., Brad Keselowski and Erik Jones are the only past winners who will be in this year’s event. Not to mention, of those, only Hamlin and Harvick have won more than once. Downforce and horsepower packages may change, but taming the Lady in Black is every bit as challenging now as it was in the past.