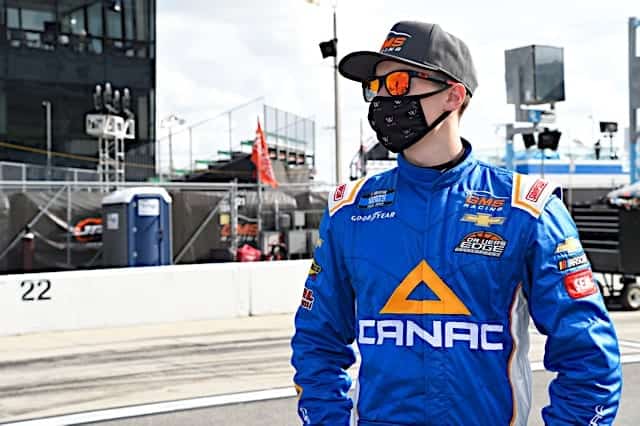 Raphael Lessard is out of the No. 24 at GMS Racing in the NASCAR Camping World Truck Series effective immediately, GMS announced May 3.

According to GMS’ tweet, Lessard will not be in the ride for the remainder of the season “due to unfortunate circumstances.” A separate release from Lessard noted that funding had become an issue, blaming the COVID-19 pandemic.

Though GMS’ announcement did not specify a replacement driver, Ryan Reed is listed in the No. 24 at Darlington Raceway at the moment on NASCAR’s team rosters page for the event.

“My management team and I have always believed in our ultimate success and we still do,” Lessard said in a separate release. “Over the last years, we have focused all our energies on completing full seasons in the upper echelons of NASCAR, and we have achieved that goal recently. However, we are currently in a situation where we cannot continue this season, and it’s hard to accept that fact. All I have ever wanted is to be behind a steering wheel and win.”

Lessard noted in his release that he’s working with GMS to potentially come back in 2022.

Initially announced for a part-time schedule in the No. 24 for 2021, Lessard later shifted his plans to full time. Through seven races, he had one top five and two top 10s and was 13th in points.

Reed has made two Truck starts so far in 2021, both for CMI Motorsports, with a best finish of 29th at Richmond Raceway.

Ryan Reed? The bottom of the article is kind of out of context.