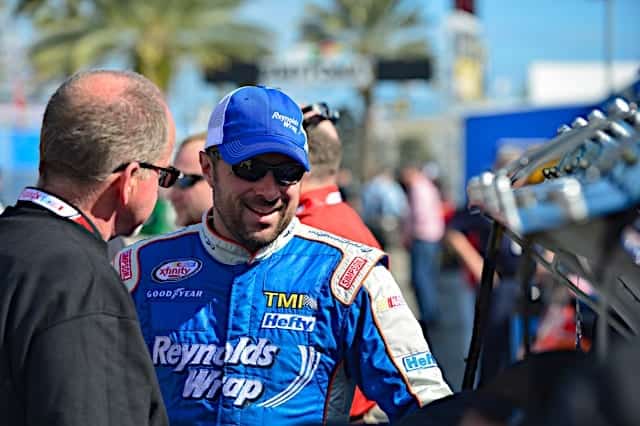 If there’s one adage that’s held true during my decade covering races with Frontstretch, it’s been “don’t meet your heroes.”

Virginia’s Eric McClure, who died Sunday (May 2) at the age of 42, was a rare exception to that rule.

Yes, I went out of my way to say Virginia’s Eric McClure. There’s a reason for that. For one, the first time I ever met Eric, he concluded our interview by saying he’d name himself UVA’s football coach since he knew how to use a PlayStation. Cavalier sports and the commonwealth we both call our native home were an integral part of his personality and image, with ACC sports becoming a conversation starter for the years we interacted in the NASCAR garage.

But more important than that, Eric was a rare case of a driver I covered that actually was a hero of sorts to me, in no small part because he was a fellow Virginian.

Rewind back to 2009, and the face of Virginia racing was Denny Hamlin squabbling almost weekly with Brad Keselowski. By contrast, my first interview with Eric (fittingly, at the then-Richmond International Raceway) was a breath of fresh air during a season of Frontstretch then-Nationwide Series Breakdown columns chronicling how Joe Gibbs Racing’s stable of Buschwhackers were stomping on everything in their path, throwing tantrums those seldom times they lost.

The opening of that interview went for a couple lines describing a smart-aleck exchange about ACC football before diving into racing. In reality, it took me damn near 15 minutes to get Eric to start answering interview questions. He was buzzing, visibly happy that day, racing at a home track and, as that interview eventually got to, happy about his life both as a racecar driver and a man.

Having said that, I’m glad we got to the interview questions, because it set a standard for speaking with other drivers that I found very few in the NASCAR garage capable of meeting.

It was humorous, with Eric remarking he was pretty sure his sponsor didn’t have illusions that he was the next Jeff Gordon. It was confident, taking shots at some of the same powerhouse organizations that his uncle’s Morgan-McClure Motorsports operation had decades ago contended for Daytona 500s and NASCAR Cup Series championships with.

But most of all, it was candid and honest in a way that I hadn’t really experienced in my then-limited time in the garage area. Here was a driver who could be defined as a “pay driver,” as the Hefty decals that McClure brought to his race teams had a lot more to his getting a ride than the results he posted on track. McClure, who earned just one career top-10 finish in 288 career Nationwide (now Xfinity) Series starts, had no qualms admitting that. As Eric put it that day, he was a businessman that got to drive racecars on the weekend and make a living doing it (he’d later tell me he wanted to buy the domain evilridebuyer.com). And doing it in the Nationwide Series meant that he was home in time for church on Sunday.

That self-assured perspective on his role, both as a driver and in the sport as a whole, was a theme that would carry over each and every time Eric and I interviewed formally. There was never a time we spoke that his appraisal of his driving abilities was overstated, never a time where his role bringing sponsorship to the table came off as an entitlement.

McClure at one point during the 2009 season paid money out of his own pocket to keep his race team on the track and locked into the top 30 in owner points. For all the jokes about having fun as a businessman behind the wheel, there was no lack of competitive fire in Eric.

See also
Beyond the Cockpit: Eric McClure on Returning to Team Rensi, Nationwide Series for 2010

Case in point, later in the 2010 season when I caught up with Eric (again, at Richmond) marked the first time that I did a driver interview where said driver was going through his social media “hate mail” as we talked. Yes, we shared laughs reading some of the NASCAR Twitterati taking down the driver of the Hefty (not wimpy) machine in NASCAR’s AAA. But McClure was not an insecure man, nor was he a full-time comedian.

He’d call himself an OK driver while at the same time apologizing to no one for figuring out how to bring enough sponsorship to the table to race, and to make enough of a living to take his girls to Disney World. Talking about Disney World with Eric might have been my favorite ever exchange with him. Even as a little kid, I could tell how important it was to my parents and grandparents that they had been able to give my siblings and I that experience. Eric beamed with that exact same pride.

To be fair, he beamed like that anytime his girls came up in conversation. His then-wife Miranda and his daughters were his absolute pride and joy. I didn’t need interview questions to figure that out.

Those that have read Frontstretch as long as I’ve been affiliated with this site know that my personal life went a different direction, and FS and I went our separate ways after the 2012 season. I fell out of touch with Eric as I did with everyone I knew in the garage, and short of a few exchanges on Twitter, Eric and I never spoke again, as his time behind the wheel had ended by the time I started writing again in 2018.

In a selfish way, I like that my memories of Eric are those of Eric the Hefty driver, fighting the good fight on-track and keeping the Nationwide Series field full. The later years of his career were certainly hard on him, as he endured multiple crashes that had me react in much the same way I did when Ryan Newman took his tumble in the Daytona 500 last year.

If there’s any lesson to be learned from 2020, it’s that doctors are doctors, and those of us who aren’t need to stay in our lanes. I don’t know whether Eric’s rough-and-tumble racing career did physical and psychological damage that he couldn’t control. I don’t know whether his repeated brushes with death led him to conflict with demons that culminated with a domestic violence charge in 2018, charges that to this day are incongruous with the Eric McClure that I came to support as a racer and admire as a man.

What I do know is that Eric McClure, an Xfinity Series regular and a legacy of one of the iconic NASCAR families of the last 50 years, gave me and this outlet the light of day over a decade ago. Most that write for this site are either too young or simply unaware that back then, outlets with “.com” in the name didn’t always get hard cards from the powers that be at NASCAR. The first race that I ever covered came courtesy of a cold pass at Charlotte Motor Speedway (yes, we asked for a hot pass). It was a piece of paper that, when folded the right way in a ticket lanyard, gave me just enough cover to stay on pit road for Saturday night’s Cup race.

Back then, we were lucky to get race teams and PR representatives to even acknowledge us.

Eric did that and then some. When we asked for an interview, he made the time. When I was in the garage in a Frontstretch T-shirt, he’d say hi if he saw me first.

He made me laugh. He made me think. And as much as he always referred to himself as acting unprofessional during our scheduled interviews, he took each and every one of them seriously.

That I never reached out to Eric after returning to the NASCAR circuit is a mistake that I’ll have to live with. I don’t want to give the impression that we were great, close friends, but I do have one unanswered question that I should have pursued.

During the 2011 offseason, a box of Hefty trash bags, party plates and other goodies showed up to my house unannounced, along with a handwritten thank-you note.

I don’t remember ever giving out my home address.

Call that exchange unethical, there’d be a case to make for such an argument. But Eric, as he was so quick to admit, was not a racecar driver. He was a Hefty representative that was lucky enough to drive racecars.

Our own Matt McLaughlin has written more than once that he still drinks Folgers coffee after they sponsored the late, great Tim Richmond in the 1980s. It’s 2021, and I still line every can on my property with a Hefty bag.

Eric told me near the end of our first interview in 2009 that he felt his team was doing a good job representing the Hefty brand. Speaking with my wallet, I’d have to say mission accomplished.

Rest in peace, Eric. You are and will continue to be missed.