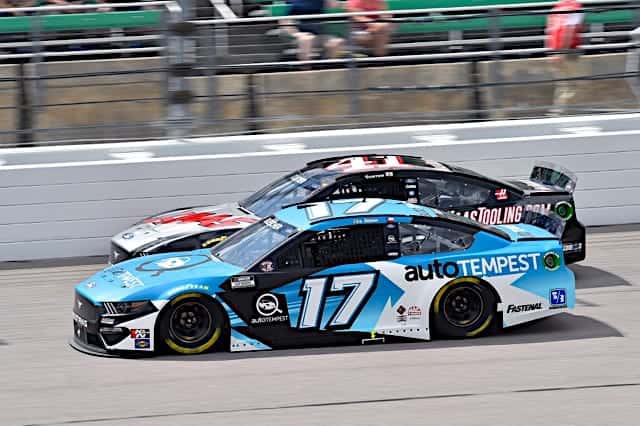 If Sunday’s NASCAR Cup Series race at Kansas Speedway was too orderly for the first 200 laps, the ending was full of surprises. A flurry of cautions in the closing laps kept the field bunched together. While the drivers up front were running into each other for the lead, those further back in the pack had plenty of opportunities to pit for fresh tires. But new tires were not the deciding factor in the race. Rather, it was a single tire sitting in the infield that changed the complexion of the event. The lap 231 caution for the errant tire set up the chaotic ending of the race.

It was also another instance of NASCAR’s notoriously inconsistent officiating.

The tire came from Tyler Reddick’s pit box. With a little fewer than 60 laps to go, Reddick made a final, green flag pit stop, along with most of the other lead lap cars. The No. 8 crew lost control of the tire, causing it to lazily roll into the infield. It eventually came to rest in the infield grass, not far from the edge of pit road. Reddick received a black flag for the uncontrolled tire and came back to the pits a few laps later to serve the penalty. But the tire still sat in the infield.

Normally, retrieving a tire from the infield requires a caution. Past instances of crew members running out to get wayward tires themselves, during green flag conditions, flew in the face of safety. So, NASCAR’s policy has been to throw a yellow, allowing officials to get the tires.

The only problem with this procedure is that there is no established rule for when NASCAR must throw the yellow.

It used to be that race control would throw a caution as soon as it became apparent that it had to pick up a tire. More recently, NASCAR has decided to let green flag pit stop cycles complete before issuing a yellow flag. The idea behind this informal rule was to give everyone a chance to make a pit stop under green and not let one team’s pit road error shake up the entire field. That policy worked out okay, until Sunday.

As Reddick’s tire sat in the infield, it was clear that some teams believed NASCAR might throw a caution, regardless of whether or not the whole field had pitted. Chris Buescher, Ricky Stenhouse Jr., and several others stayed on the track as the laps clicked off, waiting for a yellow. Eventually, Buescher was the last driver standing, leading the race with most of the field (drivers who had already pitted) trapped a lap down.

Had NASCAR thrown a caution at that point, Buescher would have been able to pit under yellow and likely would have restarted the race with only a handful of other cars on the lead lap. It would have been a great strategy play if NASCAR had actually thrown the caution first.

Instead, the laps raced by with Reddick’s tire still sitting in the infield. Buescher finally pitted with about 40 laps to go. And sure enough, two laps after Buescher had cleared pit road and given the lead back to Kyle Larson, NASCAR threw a caution for the tire. By this time, the tire had been sitting in the infield for about 20 laps.

The lack of a caution until after Buescher pitted should not sit well with the fans.

It is true that NASCAR acted like it had done in the past and waited until the pit cycle was complete before throwing the yellow. But as mentioned above, this is not an official rule. Whenever NASCAR has held back the yellow flag in the past, it was always under the assumption that every car would pit in the next lap or two. Yet Buescher and the No. 17 team clearly found a loophole in the procedure. Their strategy depended on the number of laps NASCAR was willing to wait before throwing a caution for Reddick’s tire.

After the customary handful of laps passed, it seemed reasonable to assume that NASCAR was content to let the tire sit in the infield. After all, that was the one aspect of the uncontrolled tire-during-pit stops policy that remained consistent. Since the race continued for so long after the No. 8 team’s error, the only conclusion that Buescher’s team could have drawn was that race control must not have thought that the tire created an unsafe situation.

Even the FOX broadcast team commented that the tire was out of the way and that, because the No. 17 had pitted with the expectation that there would be no yellow, NASCAR couldn’t throw the caution right after Buescher pitted without looking negligent, or manipulative. Yet that was exactly what NASCAR did.

Before the next race weekend, NASCAR needs to come up with a plan for uncontrolled tires during green flag pit stops and stick to it. The delayed caution during Sunday’s race was completely unacceptable and a bad look for the sport. If Reddick’s tire caused an unsafe situation, NASCAR should have thrown the caution immediately.

But if there was no safety issue, there was no need to throw the caution at all, regardless of when Buescher pitted.

NASCAR may have been trying to stick to its informal policy by letting the pit cycle complete, but it was clear that Buescher and several others were going to delay the completion of the cycle. Waiting to throw a caution for a tire that sat in the infield for 20 laps makes it look like NASCAR doesn’t care about safety.

For that matter, picking a lap to throw the caution effectively made NASCAR manipulate its own race. The vagueness of the uncontrolled tire procedure cost Buescher a shot at victory. Moreover, if NASCAR had thrown a yellow for Reddick’s tire immediately, the race would have restarted with more than 32 laps to go. Facing a longer drive to the checkered flag, it is worth wondering if all of those late-race cautions that took place would still have happened.

By trying to avoid shaking up the field during a green flag pit cycle, NASCAR might have inadvertently created a situation where the final finishing order was jumbled up even more by the late race cautions than it would have been otherwise.

The only way to avoid situations like this in the future is for NASCAR to clarify its policy about what happens when there is an uncontrolled tire during green flag pit stops. There must be no more informal procedures, no more case-by-case basis, and no more toying with unsafe situations.

If runaway tires are unsafe, then NASCAR cannot be afraid to interrupt green flag pit stop sequences. As Buescher and others demonstrated, tightening up the rule would prevent teams from getting burned by inconsistent enforcement on scenarios that NASCAR did not foresee. For now, add Sunday’s race to the list of infamous events that will be remembered primarily for bad officiating by NASCAR.

The next time anybody affiliated with NASCAR feels a shred of embarrassment over pretty much anything will be the first time.

I don’t get this take. So if Nascar threw the yellow before Buescher pit or immediately after the tire went astray, you all would be complaining that Nascar is a fault because half the field would be a lap down and they should have waited? I am far from a Nascar apologist, but this issue is not one to get upset about. Like you said, in the past Nascar let the pit stops cycle threw then throw the yellow. That’s exactly what they did.

iceman202290
Reply to  A Different Steve

I agree – these teams took a gamble and lost. Every team will know for next time that NASCAR will let the pit cycle complete before calling a yellow.

It is a judgment call and whenever you have judgement, you have conspiracy. I think NASCAR did make the right call based upon previous data. I do think the circumstances change if this was at Atlanta where the tire can easily get close to the racing surface and become a safety concern.

You are right – in the past NASCAR did what they did to manipulate the race instead of letting the events themselves dictate. It’s not about complaining – people will always complain – it’s about integrity of the sport (NASCAR has very little, if any but not the point). If the presence of a loose tire creates a safety issue, and we all know NASCAR is all about safety, then simply the yellow needs to fly the second that happens – regardless of how it affects the cars on track. People can complain all they want – but it’s set in stone and there is no room for manipulation. If the need for the caution is safety, then by definition NASCAR is intentionally putting everyone at risk by waiting even one lap.

DoninAjax
Reply to  A Different Steve

It wouldn’t have mattered for the cars caught a lap down because they would not have to pit get the wave around and be back on the lead lap.

Bill B
Reply to  A Different Steve

The point is, it doesn’t matter what NASCAR does, either way.
They just need to write it down and do it every time.
What’s that word..?????
Consistency.

Impossible to embarrass Nascar, they are oblivious to it.

NASCAR is pushing betting on races now. They have articles on NASCAR.com.
…but, who would put down a bet knowing how heavily manipulated the races have become?

NASCAR will continue to distort and pervert itself chasing the last penny. It is a sad sight to behold.

Any reason they can’t have a procedure to close the pit lane for a few minutes so they can clear the tire/debris/whatever without throwing a yellow?