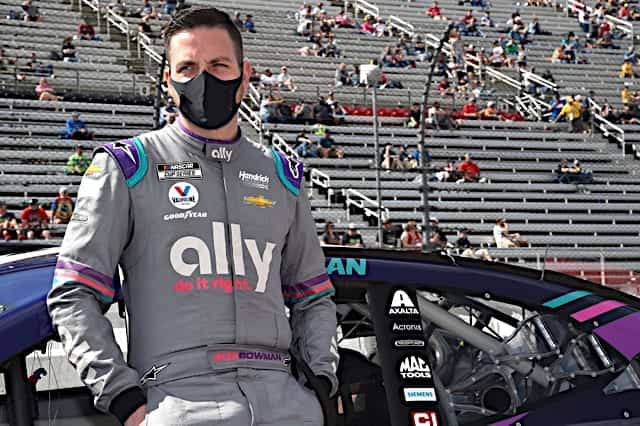 The victory was the first for Bowman at a short track, as well as the first points-paying win for primary sponsor Ally Financial. With Bowman’s move to the No. 48 Hendrick Motorsports Chevrolet in the offseason, it was also the first time the longtime HMS entry had visited victory lane in a points race since Jimmie Johnson‘s win at Dover International Speedway in June 2017. It was also the first Hendrick victory at Richmond since 2008 and Bowman’s first win since Auto Club Speedway in March 2020.

Bowman dedicated the win to HMS crew member William “Rowdy” Harrell and his wife Blakley, both of whom were killed in a car crash last November.

Bowman also launched a line of shirts after the race, emblazoned with the slogan “Nobody Likes Us Anyway,” which Bowman said to spotter Kevin Hamlin as he did a burnout on the frontstretch. The apparel sold out within a short time of its unveiling.

Frontstretch caught up with Bowman after his Richmond victory to talk about the team’s hot start to the season and coming into his own as a NASCAR personality while being in the public eye.

Adam Cheek, Frontstretch: You won at Richmond — my home track — and those last 12 laps were wild to watch, and they had to be the same for you.

Alex Bowman: Yeah, for sure, I was surprised just to get the lead and then start driving away from the No. 11 car. We struggled a little bit on our short runs and [crew chief] Greg [Ives] made great adjustments, and that thing was really fast there at the end. I think we had a car capable of winning on long runs, but to do it on a short run, I was really surprised, and it was really great to get that Ally Camaro in victory lane.

Cheek: You sounded pretty incredulous in your postrace interview … and said your crew has had to deal with you on short tracks and you drive them wrong. What felt different that afternoon, and did the two short tracks previously — though I know Bristol Motor Speedway Dirt was a whole different animal — help you in any way leading up to Richmond?

Bowman: I mean, I think for a while in our short track program, we tried to go with things that made Jeff Gordon great and Chase Elliott really good, Jimmie Johnson really good and quickly realized that I just drive the short tracks different. I struggle to do some of the normal things that they do. Things that are easy for them and seem right to them seem wrong to me, so Greg went to work on coming up with a package that wouldn’t force me to completely change what I do behind the wheel, and it worked really well.

Bowman: Yeah, there was a lot going on there [laughs]. It’s pretty awesome for Ally to get their first points win, our first win together in the [No.] 48 car, get it back in victory lane. Obviously, it’s been a while since, like you said, Hendrick has been to victory lane there, so it’s just really cool. Never would’ve thought that our first win of the year would be at Richmond, but it’s really neat.

Cheek: You were visibly emotional afterwards, dedicating the win to Rowdy, his wife Blakley and their families. If you’re all right to talk about it just a little bit, now that you’ve had a few days since then, how has it impacted you?

Bowman: Yeah, for sure. I mean, I think we all are expected to win races this year and knew that that first one was gonna be emotional. A lot of things throughout the year have been really emotional without them, so I talked to Rowdy’s family quite a bit and really appreciate their support. They’re tuning in all the time and watching us and cheering us on, so [it] means a lot to have their support, and we miss them both every day.

Cheek: Do you feel like you’re starting to find your footing with fans outside the car? You’ve been in Cup for a few years now with Hendrick and you just launched those “No One Likes Us Anyway” shirts. You said on Instagram that those numbers have blown you away, so what has that been like with the merch taking off?

Bowman: Yeah, it’s pretty wild. I mean, I’m not ever gonna be the popular kid, right? That’s just not me. I honestly really don’t like attention very much, I kinda keep to myself, I’m pretty quiet and reserved. The “No One Likes Us Anyway” shirt was kind of a joke at that. I figured we’d sell some, but I think we passed our preorder goal in like 30 minutes [laughs]. So it’s pretty crazy, because it’s just me and a buddy shipping out, and […] I’m gonna have to hire people to ship these shirts out.

It’s pretty insane, so [I] never expected that by any means. We’ve done ABR [Alex Bowman Racing] merch, and […] I think we sold 60 shirts in a day once, and it was like a lot for us, you know? And we sold [the 2021 shirt] in like three minutes, so yeah, it’s a lot. It’s really cool and cool to see the fans’ support. Like I said, I’m not the popular guy by any means, but [I’m] very appreciative for those that support us.

Cheek: You’ve said in the past that you want to be known for what you do behind the wheel. You’ve gotten more experience in the past year doing the Chili Bowl and other ventures, so do you feel like fans are starting to embrace you for who you are as well alongside that?

Bowman: I hope so. I mean I’m a pretty regular guy, right? Like, I don’t have any extravagant hobbies, there isn’t anything super unique about me. I just like to work on racecars and drive racecars, spend time with my dogs, have a really small circle of close friends. There’s not that one super cool thing about me, I guess. I just really like racecars, so yeah, I don’t know [laughs].

Cheek: This year, Hendrick’s been on a roll. You, Kyle Larson and William Byron all have wins. Chase Elliott doesn’t as of yet but he’s had a lot of good runs, and he’s the reigning champion. What have you noticed about the team gelling so far this year, even with not being together as much with COVID-19, in working so well together and getting these results so early, so often?

Bowman: Yeah, I think [at] the end of last year we were obviously really strong. We did a lot in the playoffs, the [No.] 9 obviously won the championship, so I think that carried over to this year. But the atmosphere around there is incredible. Everybody’s so excited every week, guys in the shop are working their butts off, but they all seem like they’re in a really good mood, which is awesome to see.

We want to win for all those guys back at the shop, and to have three wins already as a team — I’m sure Chase is gonna win soon — it’s really, really cool to get four cars in the playoffs. I mean, I think we’re gonna get four cars in the playoffs; it’d be crazy not to, right? I feel like the [No.] 9 will definitely be in, but yeah, it’s just neat to see. The atmosphere around the place is incredible, [there were] definitely some changes this offseason but everybody’s working together really, really well.

See also
NASCAR Mailbox: The Tire Seen 'Round the World (or Infield) at Kansas

Cheek: This last question is going to come off as incredibly random, but I thought about this since I was talking to you today and her new movie, Stowaway, came out yesterday on Netflix. But I’m pretty sure I remember you tweeting at [actress] Anna Kendrick a few years back. I wasn’t able to find much on it, but I’m a big fan of hers as well and was wondering if you could tell me what that was about.

Bowman: I think I just tweeted at her because I think she’s hot [laughs]. I could be totally wrong … but yeah, I’m pretty sure that’s probably why I tweeted at her. But yeah, big fan. If she’s listening out there, hit me up [laughs].

I don’t know why but this article irritated me. ?