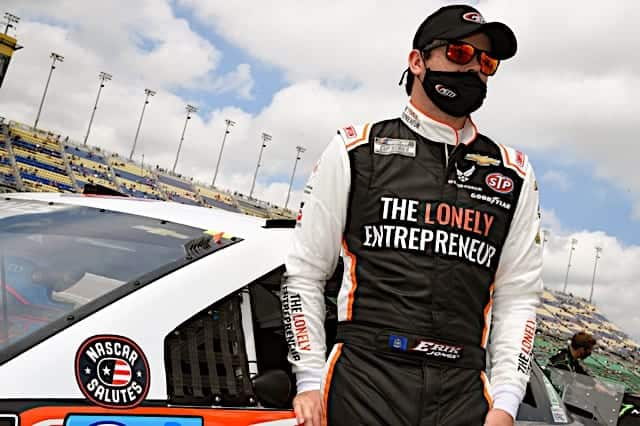 Birthdays can be a special and wonderful time for everyone, but winning a NASCAR race on the same day amplifies its sweetness even more. That’s what Kyle Busch did for the second time in his career on Sunday (May 2) in the Buschy McBusch Race 400 at Kansas Speedway, scoring his 58th career NASCAR Cup Series win and his first victory of the 2021 season.

Busch, Cale Yarborough and Matt Kenseth are part of the limited squad of drivers who have won a Cup Series event on their birthday. Ron Hornaday Jr. scored two birthday wins in the Camping World Truck Series ( in 1998 and 2009), and Elliott Sadler was given the win (after review by NASCAR) on his 41st birthday in the 2016 NASCAR Xfinity Series race at Talladega Superspeedway.

Aside from these five drivers, nobody has ever matched this feat across the history of NASCAR’s top three series. Not even Dale Earnhardt, Richard Petty, Bobby Allison, Bill Elliott, Jeff Gordon, Jimmie Johnson or Darrell Waltrip can say they’ve done that. Nor can Kevin Harvick, Ryan Newman, Christopher Bell, Tyler Reddick and Chase Briscoe, due to their birthdays falling during the offseason.

But there are a few events on the 2021 schedule that do line up with birthdays that several current drivers have. Should good fortune fall their way, perhaps they may get to have their birthday cake and eat it, too … in victory lane.

After getting dropkicked by Joe Gibbs Racing at the end of 2020, Richard Petty Motorsports was kind enough to bring Erik Jones aboard to drive the iconic No. 43 car. He may have a home for this year, but it hasn’t been a comfortable one. He currently sits 27th in the standings with an average finish of 22.2 and has just two top-10 finishes, coming at Las Vegas Motor Speedway and Bristol Motor Speedway Dirt.

However, May 30 will be a special day for Jones in two ways. Not only will he turn a young 25 years old on that day, but he’ll be racing in NASCAR’s longest race on top of it. Out of four Coca-Cola 600 starts, he has a best finish of seventh, which came during his rookie year of 2017. His last Cup win came in the 2019 Southern 500 at Darlington Raceway, another crown jewel event. The 600 also falls into the same prized category.

Given the race equipment that he has, Jones will need to push harder in order to be in contention for a win, let alone a top-10 finish. But we have seen stranger things happen in a 600-mile span. If Jones can be in the right position to capitalize on the wacky misfortunes of others, a victory there would be one that both he and owner Richard Petty would forever be grateful for.

Georgia native Chandler Smith is seven races into his first full-time NASCAR season, driving for Kyle Busch Motorsports in Trucks. Unfortunately, the climb to success has been a slow one.

He did lead 24 laps at Richmond Raceway en route to a fourth-place finish. Aside from that race, he only has one other top-10 finish and sits 11th in the standings with a 17.7 average finish. These numbers aren’t what KBM expects to see this early in the season. But Smith can use the June 26 race at Pocono Raceway to turn his season around.

Smith has two ARCA Menards Series starts at the triangular-shaped facility, finishing eighth and second, respectively. With the added element of the date being his 19th birthday, perhaps Smith could use it as extra motivation to wheel himself into victory lane and get people talking.

Like Smith, there will be another driver who will seek a birthday triumph at the Tricky Triangle on June 26: 2019 Talladega winner Spencer Boyd.

Boyd’s upset win at Talladega is still the lone victory for the Young’s Motorsports team. Ever since then, the numbers have been far from ideal among both parties. He finished 20th in the standings last year with goose eggs in the win, top-five and top-10 columns. This year, he sits 27th in the standings with a 27.7 average finish, again with zeros across the board. His best finish of 2021 came at Daytona International Speedway, where he finished 13th.

Boyd has two prior Truck Series starts at Pocono, with a best finish of 18th in 2019. Out of the drivers on this list, Boyd looks to have the least amount of likelihood on scoring a birthday win on speed alone, but Pocono is notorious for having extraordinary weather events alter the outcome of races. Should a phenomenon like this occur, Boyd might be destined to do a rain dance on top of a birthday one.

Brett Moffitt opened the Xfinity season with an achingly close runner-up finish at Daytona. Now that he’s running for points in that series, Moffitt’s focus on winning is more extreme than ever.

A good time for that to happen would be Aug. 7, when the Xfinity Series heads to Watkins Glen International. Moffitt turns 29 years old on that day. While his Xfinity record on road courses may be bleak, he took home an easy win the 2019 Truck Series event at Canadian Tire Motorsports Park. He also won in his last ARCA Menards Series East outing at Watkins Glen in 2018.

With stout road course competition from drivers like A.J. Allmendinger, Austin Cindric and Justin Allgaier, Moffitt and the Our Motorsports team will have a tall task to face. But if his crew can find a way to strategize their way up to the lead, you can bet that Moffitt will do his best to not be denied.

In April, Harrison Burton made his own history by being the first driver born in the current millennium to start a Cup event, finishing 20th at Talladega. Five more months from now, he will have the chance to make more history.

Burton put together a fantastic rookie season in Xfinity last year, collecting four wins, 22 top-10s, an eighth-place points finish and Rookie of the Year honors. One particular date that Burton could have circled on his calendar this season is Oct. 9, when Xfinity heads to the at Charlotte Motor Speedway ROVAL.

For Burton, last year’s event brings forth painful memories, as it’s where his playoff hopes were derailed after he retired from the race with mechanical problems. He hasn’t won yet this year but has been point racing his way into the playoffs. This time around, he will be sure to do whatever it takes to redeem himself from 2020 and make his 21st birthday a memorable one by winning at Charlotte … or an unmemorable one, depending on how hard he chooses to party afterward.

What you do mean by Sadler was “Given the win”?? I remember that race. He was leading on the last lap when the caution came out. It was close between himself and Logano if I remember correctly. Drivers have won races dozens of times this way now with the rule change years ago. I guess they were all given a win also.

In my opinion, the yellow flag should’ve never been thrown. Alas, it was still thrown. But the key thing is that he didn’t maintain his position. Which, as the leader, you are supposed to do under caution. He crossed the line in 5th, yet was still given the win. It was a bogus call on NASCAR’s part. Meanwhile, Logano’s finishing position was 27th after Sadler tangled with him. But his position at the moment of caution was 7th. Obviously he couldn’t maintain that position as he was wrecking. If NASCAR gave Sadler the win, should they have also given 7th place to Logano?

Hope you see where I’m going with this.