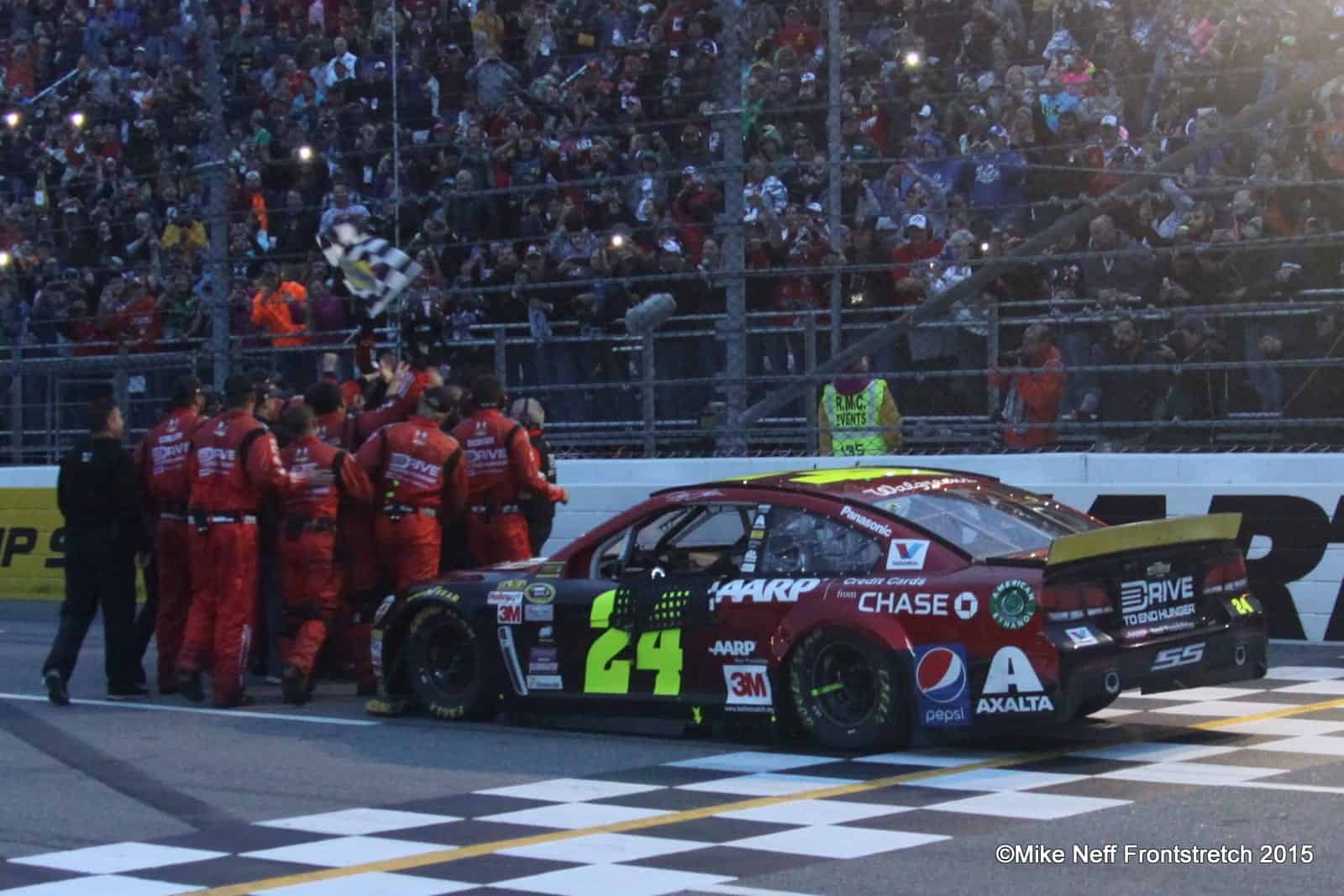 NASCAR remains the top dog of racing competition in the United States, with a loyal fanbase worldwide. With many changes made to the 2021 NASCAR Cup Series in terms of tracks, events and schedule, it’s high time to look back on some of the greatest races in the sport’s history.

How Many Races are in a NASCAR Season?

NASCAR has a long and storied history, with the association heading towards its 86th birthday this year. What began as the National Championship Stock Car Circuit in 1947 eventually morphed into the sporting behemoth we know today, with massive fan engagements and multiple NASCAR betting odds available for every event.

The racers accumulate points throughout the system based on their race finishes and the laps led. After the first 26 races, the top 16 drivers are seeded into a playoff system for the final 10 races of the season, making it 36 races in total, alongside the All-Star Race (formerly known as The Winston).

Progress never stops: the 2021 season saw many changes made to NASCAR’s tournament format, with the number of road courses increased from three to six, then seven due to Auto Club Speedway’s step back due to the COVID-19 situation. Dirt tracks have also been reintroduced for the first time since 1970, with many other popular races brought back to the schedule for the year.

What is the Most Prestigious NASCAR Race?

Though each fan may have their favorite on the calendar, there’s little doubt that the Daytona 500 is the crown jewel of NASCAR racing. Known as the Super Bowl of Stock Car Racing, The Great American Race and the answer to the question, “what is the most prestigious NASCAR race?” the 500-mile-long tussle is the curtain-raiser of the NASCAR Cup Series season, the first of two races to be held at the location – the other being the Coke Zero Sugar 400, the final race of the regular season.

It offers the largest prize pool and the most prestige of any race. The winner is earning a replica of the famous Harley J. Earl trophy, and their car displayed in race-winning condition for one year at the Daytona 500 Experience museum.

The winner of the 2021 Daytona 500 was Michael McDowell. The driver with the most wins at the big event is Richard Petty, the most famous NASCAR driver in most people’s eyes, winning it seven times between 1964-81.

The 8 Most Breathtaking NASCAR Races Ever

Not every race is made equal, and some of the most incredible finishes and battles on the track live long in the memory, sometimes even decades after the fact. Without a doubt, these are some of the best NASCAR races of all time.

This race is memorable for a three-wide photo finish that no one saw live from the comfort of their home due to technical difficulties. This real marathon lasted over three hours on account of the eight separate caution periods for 36 laps in total.

The battle between veterans Terry Labonte and Darrell Waltrip on the final lap was as close as it could get. Still, they were both pipped to the post by rookie Ron Bouchard with a well-timed slingshot, coming seemingly out of nowhere – so much so that Waltrip himself asked where Bouchard came from once the race was all over.

In terms of NASCAR history, the Talladega 500 that year also marked the final time the Wood Brothers Racing No. 21 Ford donned the Purolator colors, marking the end of a sponsorship era. Due to technical problems with the broadcast during the race, the finish was shown separately on CBS Evening News that night.

Many consider this to be one of the absolute greatest NASCAR races, with a whopping 68 lead changes between 16 different drivers, making it one of the most competitive races in history. Perhaps it was expected to some extent due to the incredibly stacked field, with the top seven spots filled out by Dale Earnhardt, Buddy Baker, Terry Labonte, Bobby Allison, Cale Yarborough Darrell Waltrip and Harry Gant.

Earnhardt was already leading the Winston Cup by this point, the 19th of the 30-race season, without having previously won a race. Still, despite this long-overdue victory, he’d ultimately only finish fourth behind Labonte, Gant and Bill Elliott.

One of the many Daytona epics, this one marked the torch’s passage between racing generations in more ways than one. Kyle Petty got the pole, with his father waving the green flag.

Jeff Gordon, already seen as a shoo-in for Rookie of the Year, took the lead on the first lap, with the “Dale and Dale Show” of Dale Jarrett and Dale Earnhardt, with the former’s father, Ned Jarrett, cheering his son on in the final laps of the CBS Sports broadcast.

Again, Dale Earnhardt features prominently in the tale of this race, the No. 3 going all-out for the win, battling with Terry Labonte in a way some considered to be over the line. The wily driver, 48 years of age at the time, got the better of his rivals at the Bristol Motor Speedway in controversial fashion, dealing with his fight back on fresh tires by turning Labonte around in the second turn, causing a massive pileup behind him as he charged on to his 47th career victory.

“He never means to do it. It just happens that way.” – that’s Labonte, ever the stoic.

The fourth race of the 2001 season, this one marks a battle for the ages between Jeff Gordon and Kevin Harvick, as they got ahead of the rest of the five-car pack just. The duo dove ahead of Jerry Nadeau and Dale Jarrett, with the rookie racer Harvick winning by .006 at the end, the second-closest result in NASCAR history at the time.

The bittersweet fact that made Harvick’s performance extra special was that he served as the replacement driver for Dale Earnhardt, who lost his life in a freak accident in the 2001 Daytona 500 the week before.

Kevin Harvick again ripped up the script six years after his Cracker Barrel heroics, beating out Mark Martin by 0.02 seconds even though the Ginn Racing driver kept the lead for most of the critical late period of the race.

Can it get any closer than a championship result decided on a tiebreaker? The battle between Carl Edwards and Tony Stewart came right down to the wire, with just a three-point difference to separate them heading into the season’s final race.

Edwards got first place at qualifying but finished second behind Stewart when it mattered in a very close-run affair, which was disrupted by the rain for over an hour. Though Edwards picked up another bonus point for leading the most laps, it still wouldn’t be enough to take over Stewart in the overall standings.

Though Stewart was in third place at the time of the restart, his fresher tires enabled him to take the lead and keep it. And he was the one who ended up having the last laugh, despite having the same points total as Edwards, on account of having more wins than his rival. It was Stewart’s third Cup Series championship title, just a few of his many incredible racing accomplishments – most notably; he’s the only driver in history to win both a NASCAR and an IndyCar championship title.

You’ll find this one in the history books as Jeff Gordon’s final career win – and indeed, the whole season was a bit of a farewell tour for the legendary driver who almost clinched one last title on the way out.

However, the big controversy here came from a deliberate takeout, as Matt Kenseth, multiple laps behind and with no chance to otherwise impact the proceedings, purposefully ran into race leader Joey Logano as payback for an earlier race in the season. He was suspended for two races while Logano missed out on a Championship 4 spot in the end.

2021 is shaping up to be an exciting and influential year for the NASCAR annals, though it remains to be seen whether any of the races will offer up the sort of incredible moments required to make it onto this list. Even if they can’t compete with the madness of the 1993 or 2007 Daytona 500s, the changes made to the format make this a great time to watch the best stock car racers in the world.

8). Brad Keselowski runs Denny Hamlin into the Talledega catchfence to give the underdog team its first-ever win. This sets off a feud that ends at Gateway in a near-fatal last lap crash.

8). Brad Keselowski runs Denny Hamlin into the Talladega catch fence to give the underfunded team its first victory. This feud ends in a near-tragedy at Gateway.

My eight beats your eight any day

Wow. What an accomplishment!

My memory must be slipping away. I remember Carl Edwards trying to come down into a space already occupied by Brad, and Brad wouldn’t lift so Carl put himself into the catch fence. Dega, Brad’s first Cup win. I cheered Brad then and now.

Terry only led two laps that day, but they were the most important ones. Amazing how many superstar drivers failed to finish that one…

He led the second lap under caution to the checkers. It’s a good thing Brian wasn’t around to “improve” the product.

1972 Wilkes 400 at North Wilkesboro – Richard Petty and Bobby Allison beat the hell out of each other for several laps coming to the checkers.

2003 Carolina Dodge Dealers 400 at Darlington – (also mentioned by Matty above) Ricky Craven and Kurt Busch. The last few laps are absolutely incredible. This is the definition of what racing is about.

Thanks for the reference to the ’81 Talladega 500. Here’s the finish…