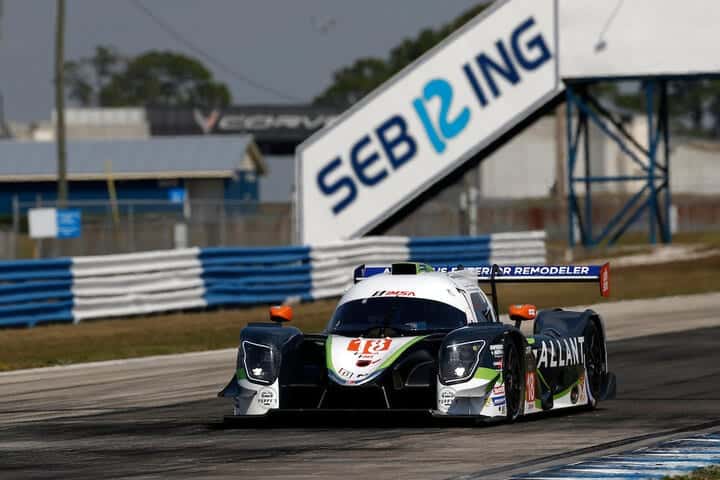 Andretti Autosport announced Wednesday (May 5) that they will move their sports car racing operation from IMSA Prototype Challenge to the IMSA WeatherTech SportsCar Championship, effective immediately.  The team will continue to race in the LMP3 class.  Jarett Andretti will continue to drive the car, re-numbered from No. 18 to No. 36 due to Era Motorsport having the rights to the No. 18 in the IMSA WeatherTech SportsCar Championship.  Andretti will be joined by Oliver Askew for Mid-Ohio at minimum.

“We’re really proud of what Jarett and our LMP3 team has accomplished so far in the Prototype Challenge, and are looking forward to this next step into full WeatherTech Sportscar competition,” Michael Andretti, chairman and CEO of Andretti Autosport, stated in a press release.  “Continued sportscar growth has always been on the radar for us at Andretti Autosport and this helps to set things in the right direction.  I think Jarett and Oliver will make a great pairing for Mid-Ohio for our first official outing.”

There are few differences between running IMSA Prototype Challenge with a current-spec LMP3 car and running the LMP3 class in the IMSA WeatherTech SportsCar Championship.  The team will be running the same Ligier JS P320-Nissan that they’ve had all year.  There are minimal rule changes between the two series.

For Andretti, Mid-Ohio will be his IMSA WeatherTech SportsCar Championship debut.  He has one career start in a top-level sports car series.  That took place in the 2012 Rolex 24 at Daytona.  Jarett shared a Mazda RX-8 for Yellow Dragon Motorsports in the GT class with his father John, Anders Krohn and Taylor Hacquard.  The team ended up dropping out due to engine failure and finished 50th overall, 37th in class.

Last year, Jarett drove full-time in SprintX alongside Colin Mullan.  They claimed the championship in the Silver Cup on the strength of four class victories.   In a part-time Sprint schedule, Jarett finished fourth in Pro points with six podium finishes in 10 starts.  In Prototype Challenge, Jarett has been teamed up with Tristan Herbert this year.  The duo finished fourth in Daytona back in January, but ran into mechanical issues on the second lap and finished 20th in Sebring.

For Askew, Andretti Autosport will be the third different team that he will have driven for in as many races this year.  At Daytona, he was part of the LMP3 class winning lineup from Riley Motorsports in the Rolex 24 at Daytona alongside Gar Robinson, Scott Andrews and Spencer Pigot.  For Sebring, Askew scored a last-minute ride with Forty7 Motorsports in their Duqueine M30-D08-Nissan.  With Stevan McAleer and Austin McCusker, Askew finished a lap down in fourth.   Last year, Askew raced in the NTT IndyCar Series for Arrow McLaren SP.  In 12 starts, Askew scored a third-place finish in the first 250-lap race at Iowa Speedway and had two additional top 10s.  However, his season was derailed by a big crash in the Indianapolis 500 that resulted in an undiagnosed concussion.  After being out of sorts for the doubleheader weekends at World Wide Technology Raceway at Gateway and Mid-Ohio, Askew sat out the Harvest GP doubleheader at Indianapolis.

I received an unexpected gift box from Jarrett & the #CheckIt4Andretti foundation last week.
I am a miracle. I’ve lived more than 8 yrs with Breast Cancer in my bones.
I spent 5 young yrs living close to the Indy500 track. It made me a life long Andretti fan!
Then Indy cars started coming to Portland Ore, PIR, in the early 80’s with the Portland Rose Festival. My boys grew up at PIR. We got to see Mario & Michael, year after year. We managed to meet & chat with them almost every year.
One year Michael was signing autographs at G.I. Joe’s, who sponsored the races. Marco was running around goofing off in those days & my boys got to good off with Marco.
Then we lost the INDYCARS for 17 yrs. But they came back 3 yrs ago.
I got to say hello to Mario again.
The year before Covid, my Son & I crossed over the track bridge to go check out the pits late on Friday. At the foot of the bridge stood Mario with the two seater!! I was beyond thrilled. Only one person there chatting with Mario.
I got to tell Mario that I hoped to bring a boat load of BOODY BUDDIES with me the next year.
Booby buddies are my breast Cancer support group that also has a cancer foundation to help women who have to choose between feeding their kids, keeping the lites on, or paying for their meds.
Booby Buddies “Provision Project”was started because our founder had experienced friends actually dying because they could not afford their meds.
My greatest dream now is to put my Booby Buddies INDY Crew together & turn at least one of our PIR INDY races, PINK FOR PROVISION PROJECT.
Provision Project is a small non-profit that works so hard to find money each month to help a couple of ladies, as much as they can. I want to see Provision Project go National/ VIRAL so many more women can choose life not bills, for their kids,families & communities that need them so much!

CHEER FOR JARRETT & ALL OUR ANDRETTIS!!
Thank you so much for the gift box. I will be posting my story, as requested, soon, on the #Checkit4Andretti website.
PLZZZZ DONATE IF YOU CAN !