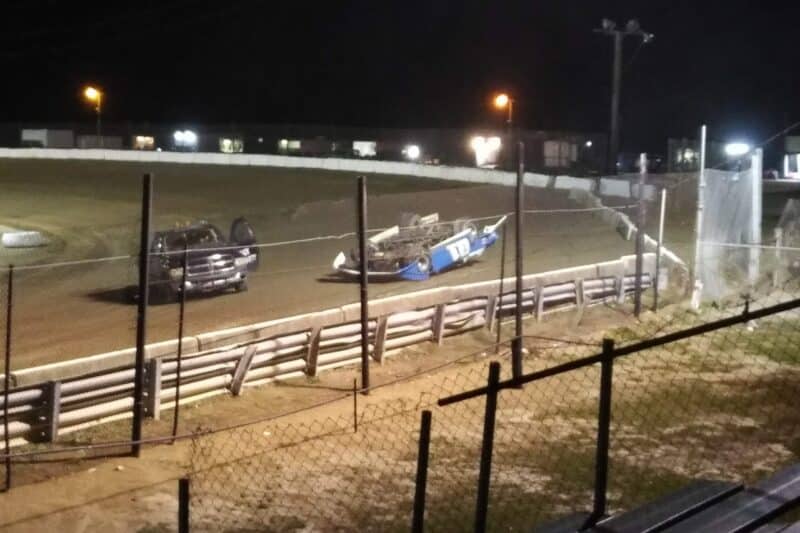 For as long as I’ve been a dirt racing fan, I’ve been a DC sports fan longer. “It builds character,” my dad has often told me.

Being a lifelong DC sports fan, it was no surprise that my phone was blowing up all day with folks asking for my take on Tom Wilson’s latest highlight reel. Wilson, for those who don’t watch hockey, is the Washington Capitals’ enforcer, a tremendously talented hockey player that has a rap sheet of fighting 10 miles long. This week, Wilson threw a punch while in a scrum and got into a fight after the whistle, eventually throwing an opposing player to the ice.

Yet, because he’s Tom Wilson and has a reputation for being a fighter, this wasn’t a fight. It was a calamity. It made victims of the poor widdle New York Rangers, and required immediate harsh intervention from the league that didn’t come.

Kind of sounds like the reaction the NASCAR community had to Brad Keselowski a la 2014. Despite having changed the sport to a knockout format that by its very nature made wreck ‘em a viable means to advance, and despite embracing the “boys, have at it” mantra of its otherwise inconvenient past, Keselowski had the majority of the racing community viewing instigators like Kevin Harvick and thugs like Matt Kenseth as victims of a renegade Michigander set on destroying stock car racing’s playoffs.

What does all this have to do with dirt racing? Let’s get to that.

If there’s a common thread to these two examples, it’s that there are consequences for a sport sending mixed messages when it comes to extracurriculars on and off the field of competition. Hockey allows its players to stage boxing matches in between commercial breaks, so of course scrums are going to disintegrate into brawls. NASCAR racing encourages its drivers to have at it whenever they need to throw their trained fans a bone, so of course spoiled millionaires are gonna brat like, well, spoiled millionaires.

Rewind back to January within the first two weeks of the year, Talladega’s Ice Bowl saw driver Buddy George literally arrested on the racing surface after he assaulted a track worker following a wreck. There were no such incidents on track for the remainder of the program.

Now last week, the opposite played out. After a dispute over racing etiquette last Thursday night at Jacksonville Speedway, Friday morning saw World of Outlaws regulars Aaron Reutzel and Wayne Johnson get into a literal fight in the pit area Friday afternoon at the I-70 Motorsports Park. The WoO did literally nothing. Except to post video of said fight on their official Twitter feed. And the fans took notice.

I like the fact the outlaws shared the video and don't give one damn about it, no penalties, nobody was forced to sit out tonight. It's settled for now. That's how it should be.

More significantly though, Reutzel and Johnson got through the next two full nights of racing programs without a single on-track incident.

Zero tolerance? No. Unambiguous? Absolutely. And in both cases, clear messaging yielded results for the better on the racetrack.

Which of these policies is the way to go for dirt racing is up for debate. The entire Reutzel/Johnson saga spoke volumes as to what happens when two drivers with an issue settle it mano a mano, without helmets or racecars. Namely, issues get resolved and the show goes on.

But, there’s risks to letting nature take its course. Perhaps more than any other, because racing is a team sport. And more often than not, when drivers have issues, the issues also result in racecars that said teams worked all week to prepare getting banged up.

Teams getting involved and turning fights into riots is hardly unique to dirt racing. A well-publicized brawl at the New Smyrna Speedway during February’s World Series of Asphalt Stock Car Racing resulted in the death of a track worker trying to intervene.

And just this weekend, such an ugly incident unfolded at the Hesston Speedway in Pennsylvania. The video was taken from a distance, but the accounts posted to the track’s Facebook page had some nasty elements to it. High-speed chases on utility vehicles. Punches thrown, bodies dragged.

And the track acknowledged that such an incident was a major issue that they’d address at their next drivers’ meeting.

After track personnel reviewed the situation from last night we understand we made the wrong call. Next week at the…

Here’s the rub. The track rulebook for each class of car includes the following citation: “If at any time the conduct of any team member, driver or associate becomes a discredit to the speedway, the sport, or himself, they will be removed from all racing activity at the track.”

Yet there was no mention of any such removals or suspensions despite what was clearly a nasty fight off the track.

Zero tolerance is hard, but the consequences for not enforcing it are even moreso.

Case in point, let’s look back to Thinkin’ Dirty a few weeks ago and an incident at the Ararat Thunder Speedway in southern Virginia. Ararat also has a very clear rulebook citation addressing aggressive driving that went out the window, resulting in Tyler Meadows’s racecar being wrecked out of the lead.

Since that night, Meadows has lived up to the threat his team made on social media, and they’ve yet to return to the speedway to race. Meanwhile, the average car count at Ararat for their Super Stock 4 class since the incident has been a woeful 4.5.

Muddy messaging is like racing on a muddy surface. It doesn’t work.

Yes, nothing better establishes your tough guy credentials quite like punching a guy who’s lying facedown on the ice in the head, and then grabbing him by the hair and dragging him down! A real class act I’d be proud of too! LOL…

Nice sugar coated description of the incident. Throwing a guy around half your size like a rag doll not once but twice wasn’t a fight. That was MMA bush league crap.

The guy is unhinged and needs to be drug tested, because that’s the only possible explanation as to why he gets so unhinged like that.

Typical response from a Caps fan though. Play the victim and continue to enable this guy while he continues to go out an hurt people without any consequences.

Why did I even read this ! Does frontstretch pay per word !