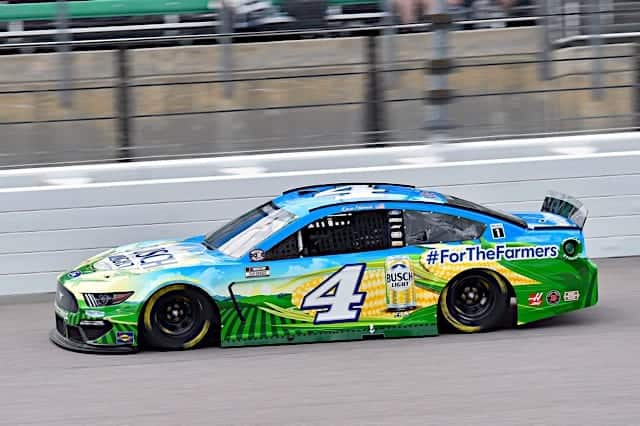 It’s time once again for NASCAR’s throwback weekend at Darlington Raceway, though much earlier in the season than previous years. Let’s get your daily fantasy NASCAR DraftKings lineups set for the Goodyear 400 on Sunday, May 9.

Last year the Cup Series took to the Lady in Black three times, including the first two events after the pause in competition due to the COVID-19 pandemic. However, all three races were run with the lower horsepower package; Sunday’s race will feature higher horsepower and lower downforce.

Although drivers haven’t run an intermediate racetrack with this setup, they did take on a few shorter tracks like Richmond Raceway and Martinsville Speedway. You can use data from these events to help you set your rosters.

You can also look at Atlanta Motor Speedway’s and Homestead-Miami Speedway’s results, as these are both abrasive tracks like Darlington. Finally, take note of who can run the high line well, like Kyle Larson and Tyler Reddick; these might earn a good finish if they don’t get too many Darlington stripes.

Before I share my NASCAR DraftKings picks for Darlington, here’s what happened last week at Kansas Speedway.

Once again, Larson dominated the race but couldn’t seal the deal in the closing laps. Still, his bonus points for laps led and fastest laps boosted his DraftKings score to over 100 fantasy points. Chris Buescher also had a good afternoon, leading 13 circuits en route to an eighth place.

All-in-all, this lineup did just enough to earn $1.50 in the $1 Happy Hour tournament; it also doubled my entry fee in the large $1 single-entry double up.

Hamlin has three wins at the track Too Tough to Tame, including the weeknight race last season after he started 16th. However, he hasn’t been as dominant there like he was in 2017 when he led 124 laps en route to victory. He did notch 53 total fastest laps in all three events last year, including 31 last fall.

Hamlin’s been stellar with this high-horsepower package so far, scoring over 130 DraftKings points at both Martinsville and Richmond after leading over 200 laps in each. The No. 11 Joe Gibbs Racing driver also has eight top fives in 11 events and is due for a win. He would love nothing more than to take his Toyota to victory lane on such a special weekend.

He’ll begin in seventh place and should quickly move to the front; if he can dominate the race, he’ll be worth his high price on DraftKings.

Harvick is on a five-race top-five streak at Darlington, including two victories last year. In fact, just one result since 2013 came outside the top five- a ninth in 2017. He held the top spot for 159 circuits in the first race in 2020 and led an additional 42 laps in the next two races.

Unfortunately, the No. 4 Stewart-Haas Racing team has struggled speed-wise so far this season. Still, Harvick was able to soar to a runner-up finish last week at Kansas on the final restart. He also earned a ninth at Martinsville and a 10th at Atlanta, so he knows how to finish well. Harvick should finish in the top five if his Darlington trend continues, which would allow him to meet his fantasy value on DraftKings.

Elliott only has five top 10s this year and, unlike his Hendrick Motorsports cohorts, is still searching for his first win of the season. He did end fifth last week at Kansas and was runner up at Martinsville, so he has the race-winning speed. Could he finally break through at Darlington?

The 2020 Cup champion led 114 laps last fall before Martin Truex Jr. wrecked them both late in the race. Elliott was also running near the front in the second Darlington event but Kyle Busch also misjudged the gap while passing him, leaving the No. 9 car mired back in 38th. Still, Elliott knows how to get around this track and can possibly earn his first Darlington victory this week.

Jones has been great at the 1.366-mile track, earning a win in 2019 after leading 79 laps. He also led 27 circuits in the midweek race before ending up fifth. But that was when he was still at JGR; now he’s competing for Richard Petty Motorsports and the difference is like apples to oranges. RPM has nowhere near the speed that the Gibbs cars have.

He could still do well there, though, as the package is more suitable to his driving style. Jones was 19th at Richmond after beginning 30th, scoring 35 DraftKings points as a result. He also has two top 10s at Las Vegas Motor Speedway and the Bristol Motor Speedway dirt race. He’ll roll off from 26th Sunday; if he gets a top 15, he’ll have a good DraftKings score.

Chastain’s Cup experience at Darlington came while competing for underfunded teams like Spire Motorsports, so you can’t really gauge his talent at this track. In the Xfinity Series, however, he has three top 10s, including a second place last fall. He also led 134 total laps in his past three events there.

Since joining Chip Ganassi Racing this year, Chastain has just one top 10 — a seventh at Daytona. But he does have three other top 15s and a few more top 10s, which certainly helps his DraftKings score. Four of the last five races resulted in 30-plus DraftKings points, which is really nice for this salary. His low price tag will allow you to fit higher-priced drivers in your lineup, if you choose to go that route.

Preece doesn’t have a whole lot of good results this year but does have the potential enough for me to play him. Plus, he’s sub-$6,000 and is a great salary-saver. He earned a 15th place at LVMS earlier this year and was 18th at the Bristol dirt track. He’ll wheel his No. 37 JTG Daugherty Racing from 29th Sunday and could earn some valuable position-differential points on DraftKings.

Though Preece has only run at Darlington in Cup the last two years, he did earn a 17th last fall after starting 35th. That’s great potential for this underdog.