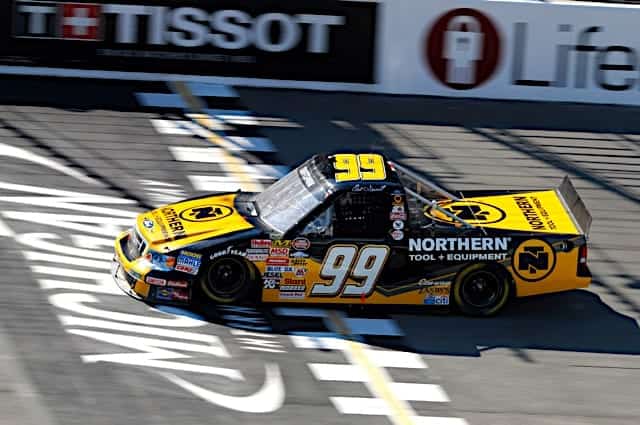 It’s easy to be resistant to gimmickry, but despite toeing that line ever so slightly, NASCAR’s now-annual throwback weekend at Darlington Raceway remains a good time.

Well, maybe not for the teams’ spotters. But for others, the weekend is a bit of a treat, not just from the TV broadcasts of the NASCAR Cup, Xfinity and Camping World Truck series races, which often include since-retired broadcasters calling the events for a portion of the scheduled distance — but also due to the proliferation of throwback paint schemes honoring some of racing’s best.

It’s entertaining to see what each team comes up with, from the obvious to the slightly more obscure. Who knew we needed a John Andretti RCA scheme here in 2021? Apparently StarCom Racing did, and Quin Houff‘s No. 00 ride for Sunday (May 9) is going to look great amid the hodgepodge of other paint jobs that will jog the memories of either long-running NASCAR fans or younger ones who’ve watched a bunch of classic races online thanks to YouTube.

That about covers it, though. Let’s say you’re an old fan tuning back in after a few years or even decades away. There’s a good chance you’ll recognize a voice on the broadcast, maybe even see a car wrapped in a color pattern you recall from years ago. But when it comes to the starting fields themselves, you’re still looking at a lot of the same drivers you’d’ve seen if you watched the previous weekend. Veterans like Kevin Harvick persist, sure, but for every Harvick there are probably a half dozen names that will be completely unfamiliar — maybe more.

One entry list for this weekend’s racing shook that trend a bit. Because on the Truck roster, in Niece Motorsports’ No. 45, is Erik Darnell.

Even if you’re a NASCAR fan who’s mostly only followed the Cup Series, you still might remember that name. Darnell was a touted Roush Fenway Racing prospect beginning in the mid-2000s, starting with the organization in the Truck Series after winning Roush Racing: Driver X, the Discovery Channel series better known as The Gong Show. He and fellow 2005 victor David Ragan were ushered in as potential replacements for an aging Mark Martin or one of the team’s other veterans should they choose to bolt elsewhere.

Unlike Ragan, who went on to become the driver of Roush’s No. 6, Darnell’s success was a bit more tempered. He won two Truck races in 2007 and 2008 for the team and eventually leapt up to a part-time role with its Xfinity program in 2009, grabbing two top fives and five top 10s in 16 starts. He got a seven-race Cup look later that year for Hall of Fame Racing’s No. 96, finishing no better than 29th at Kansas Speedway.

From then on, Darnell was mostly a journeyman. He got three more Roush Xfinity races in 2010 but failed to crack the top 10, and by 2012 he was running a nearly full schedule for the underfunded Key Motorsports. It was the last season he’d run in a NASCAR national series that decade.

He’s back this weekend, racing his first Truck event since 2008, in Niece’s No. 45. And that team is certainly no stranger to the concept of a throwback driver, too. Last year, Niece signed Trevor Bayne, Travis Pastrana and James Buescher to drive its trucks after multiple seasons away, Buescher also rejoining the team earlier this year at Daytona International Speedway.

Niece’s penchant for plucking drivers out of the annals of Racing Reference — particularly those with Roush ties; Darnell, Bayne and Pastrana have all raced for the team, while Buescher’s cousin Chris drives for the organization now — made me wonder why we don’t see this happen more often, especially at a track like Darlington during its throwback weekend.

OK, maybe there are a few obvious reasons. First, drivers who are out of the sport have often done so not because they elected to leave but because sponsorship woes forced them out, and if they couldn’t get backing when they were active on a national level, convincing someone to step up to the plate for them years later is probably a tough sell. There’s also — and this is more of a 2020- and 2021-specific problem — the lack of qualifying at Darlington this weekend that keeps one-off teams from popping up; there are 40 spots available for each race, with anyone lacking enough points to date excluded without a chance to run. The Cup event happens to have three spots available, but Xfinity and Trucks are full, with three teams each unable to compete.

To the latter point, that means spots for prospective drivers are limited. Heck, the No. 45 Darnell is driving wasn’t even available a few weeks ago, when Brett Moffitt was in the truck full time. Many of the other entered trucks or cars either have full-time racers or already had a part-timer announced, such as Josh Berry in JR Motorsports’ No. 8, James Davison in Rick Ware Racing’s No. 15 and so on.

Still, one has to wonder why in the now half-decade of the Darlington throwback weekend that there haven’t been more blasts from the past entering races, even in the years when there was qualifying. Dale Earnhardt Jr. was a prime example in the 2019 Xfinity race, as was Greg Biffle in last year’s Truck race. But one a year, while better than nothing, isn’t an exceptional average.

It’s not like some familiar faces aren’t still running at local tracks across the country. Race fans can still spot former stars like Ken Schrader, Kenny Wallace and Kasey Kahne depending on where they catch their local racing, and even one-time national prospects akin to Darnell, like fellow former RFR Truck driver Chuck Hossfeld, Ross Kenseth, Casey Roderick, Johanna Long and many, many more are still strapping into the driver’s seat, even if it’s no longer in NASCAR.

That’s what I’d like to see when Darlington’s throwback weekend is a full-blown bash again, not just with a full-capacity crowd but also with qualifying sessions that allow anyone the chance to compete. Let’s see some teams follow Niece’s lead and call up some of the sport’s wayward talent to see if a deal can be struck. And vice versa; perhaps someone from the old guard can convince a former sponsor to join back up with them for one race, provided they can find a vehicle to pilot.

If that happens more than just maybe once each year, Darlington’s throwback weekend would truly be a spectacle.

Great read. I wish we could see some one off teams enter the race at Darlington or even have a veterans race (but guess that’s reserved for SRX now). As a big fan of the NHL winter-classic, normally we see veterans or legends of the former teams make an appearance and even have a scrimmage game (the Philly vs Pittsburgh was amazing). Nascar should take notes.

The event is great, this throwback weekend is always a sellout (and with a 2nd date now. I except 2 sell outs in the future), but more can be done both at track and broadcasting. Something like a RPM2Night countdown each year of Darlington.