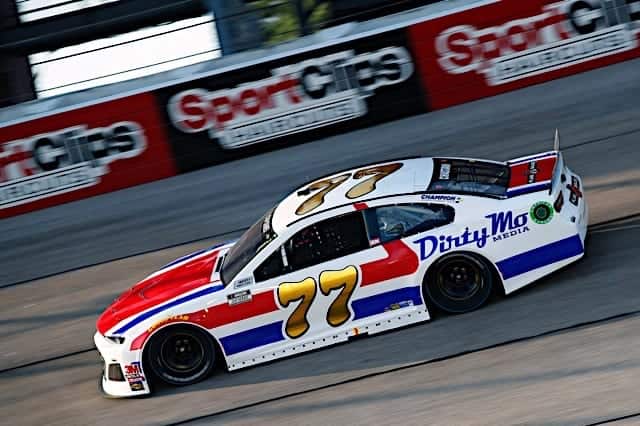 The concept seems to be starting to wear out just a bit. In fact, the vast majority of Cup throwbacks this year are either bad or just average. All of the truly great NASCAR schemes have been done to death, and very few sponsors want to actually throwback to the mid-to-late 2000s, which is when a lot of fans in their 20s started to get invested in the sport. The No. 24 Chevrolet has not run the Jeff Gordon flames car, for instance. Which is just baffling.

This gets two big knocks, one for being a straight copy of this team’s throwback last year and one for being a Chevrolet team running a Wood Brothers Racing car. With how thick the NASCAR rulebook is nowadays, that has to be in violation of something.

No more Gray Ghost. These teams need to stop throwing back to the Gray Ghost. No less than 40 teams have thrown back to this one paint scheme, and the only one that made it look good was Hendrick Motorsports’ No. 88 team a few years ago.

When a team throws back to a simple paint scheme like this, one thing that is absolutely crucial is to nail the number font. And 23XI Racing didn’t even make an attempt here. It probably would have been better off just throwing back to Michael Jordan’s Tar Heel days; it’s even not far off from the right shade of blue.

A lot of guys on our team and I have some great memories with matte black cars, so we’re taking that and putting an @AutoOwnersIns spin on it for @TooToughToTame this year. #NASCARThrowback pic.twitter.com/wtdAxZbn3v

This is just a black car.

OK, at least with Truex, the team was throwing back to an actual paint scheme. This … this is just lying. What does it even mean for a paint scheme to be a “nod”? I can understand a team not being able to run a throwback due to the sponsor not wanting it (looking at you, Monster Energy), but don’t lie and say this paint scheme is in reference to anything. JTG Daugherty Racing actually turned off Instagram comments on this post because everybody with a pulse knows this car is just really bad.

And now for the best.

NEWS: @joshberry and @tirepros to carry special @DaleJr throwback colors on the No. 8 Chevrolet @TooToughToTame. pic.twitter.com/E9DEHECRPk

It never could have been a complete replica due to various licensing issues. But this is still a pretty good paint scheme that pays homage to one of the most important and memorable victories in NASCAR history, and arguably the biggest highlight in a Hall of Famer’s career.

Kris Wright in the 02 is throwing it back to Ron Hornaday, Jr.’s 6 truck for Darlington.

I’m a sucker for those mid-2000s Goodwrench cars, and it seems pretty unique; I can’t recall anybody else running one of these schemes. The cool thing about the Truck throwbacks is that they largely throw back to old paint schemes from within the series. Running a Cup scheme in Xfinity and vice versa seems a little corny, and don’t get me started on when a Cup driver throws back to their own late model car from 10 years ago.

Marty Robbins is one of the better stories and easily the most prolific NASCAR driver more known for what they did in their actual career. The bright purple-and-yellow paint scheme is loud and unique, a pretty good combination for a throwback. With how much of a throwback Reddick himself is as a driver — car owner Richard Childress once outright called him the new Cale Yarborough — it’s only appropriate he has the best throwback in the Cup field.

Here it is! Your first look at @brandonbrown_68’s throwback paint scheme for @TooToughToTame that gives a nod to @DaleJarrett’s 2002 UPS livery!?

Everything about this paint scheme is awesome. If you grew up playing the old NASCAR Thunder games from EA Sports, this was probably the most memorable paint scheme in a time of many impressive paint schemes. Jeremy Clements is running a similar paint scheme, and that’s fine, but that was more back when Jarrett was winding down his career. This scheme was when Jarrett was still pretty competitive week-to-week.

“I’m excited to get back behind the wheel. The support from @NorthernTool means so much to me. Darlington is a tough, but fun track, so Friday night should be a good time. Thank you to Al Niece for the opportunity.” – @ErikDarnell_7

It’s one thing to throwback to a paint scheme that had a fairly modest level of success in the series, but also not enough to where everybody is tripping over themselves to throw back to it. It’s another thing to also get the sponsor of the original truck on board. But it’s absolutely next level to get the driver back into NASCAR after years away to drive the truck. That’s beyond cool, and the paint scheme looks pretty cool to boot.

I thought the 3 car was butt ugly!