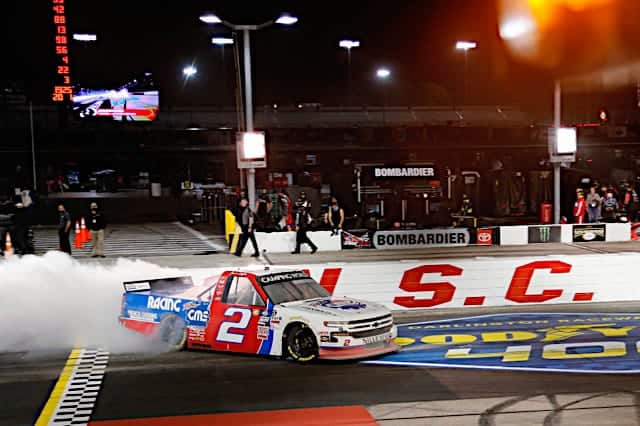 John Hunter Nemechek looked like he was well on his way to score his third win of the NASCAR Camping World Truck Series season in Friday’s (May 7) Liftkits4less.com 200 at Darlington Raceway.

The 23-year-old dominated the 147-lap contest as he looked to score Kyle Busch Motorsports’ sixth consecutive NCWTS win, which would have been a series record. However, it was not to be.

On the front row on a restart with 30 laps to go, Nemechek and teammate Corey Heim, who was making his NASCAR debut, collided. The collision prompted a massive wreck and subsequent red flag that collected nearly every truck on the track at that time including Austin Hill, David Gilliland, Zane Smith, Chandler Smith and Timothy Peters, many of whom had run inside the top 10 for the majority of the event.

The leaders get stacked up and seemingly EVERYONE gets caught up in the restart! pic.twitter.com/OGcZ8LKfzh

The beneficiary of the chaos was 2020 NCWTS champion Sheldon Creed.

Piloting a 2003 Jason Leffler throwback paint scheme, Creed squeaked by the carnage and passed Ben Rhodes with eight laps to go. Creed survived a late restart and a significantly thinned field to take his first victory of the season.

“It feels great,” Creed told FS1’s Jamie Little. “I didn’t have the best truck. Firing off, I was wrecking loose and then really tight.”

Despite his challenges, Creed also took home an extra $50,000 as part of the first leg of the Triple Truck Challenge presented by Womply. He will have a chance to make it $150,000 if he wins at the next Truck race at Circuit of the Americas.

There were 12 cautions Friday night for 66 laps. This is a new track record for cautions for the Camping World Truck Series at Darlington.

Codie Rohrbaugh and Kris Wright kicked the night off by crashing hard in turn 2 in the opening stage. The damage was so severe that each had to retire early, leaving Rohrbaugh 38th at the finish. Wright, who was donning an impressive throwback to Hall of Famer Ron Hornaday Jr.’s 2005 truck, finished one spot worse in 39th.

Just before the big melee triggered by Nemechek, Tanner Gray got spun after squeezing Ryan Truex into the wall. Akinori Ogata broadsided Gray’s nearly stopped Ford after tangling with Timmy Hill trying to avoid the wreck. All drivers emerged from the wreck unharmed, but Ogata’s 1995 Kenji Momota throwback and Gray’s No. 15 entry were knocked out of the race.

Hard hits on the frontstretch at @TooToughToTame.

The 20-lap run to the checkers was interrupted when Parker Kligerman and Stewart Friesen had yet another hard crash. Fortunately, Kligerman, Friesen and every other driver involved in a wreck were released from the infield care center.

Although they did not win tonight, Nemechek and the KBM Toyota dominance continued. Nemechek notched a stage win in the second segment. Ironically, former KBM driver Todd Gilliland scored the first stage win for Ford this season by winning the opening segment.

But with the front runners eliminated from contention, Creed found his way to the front at the right time. Rhodes held on to finish second while Carson Hocevar, Matt Crafton and Grant Enfinger rounded out the top five.

Johnny Sauter finished sixth, while Hill recovered from his aforementioned wreck to finish seventh.  Nemechek recovered to eighth, while Austin Wayne Self and Jordan Anderson rounded out the top 10. Fifteen trucks failed to make it to the finish, 13 of which retired directly due to crash damage.

Erik Darnell had a good in his first Truck start since 2008. Darnell, driving the Niece Motorsports No. 45 truck, struggled early, then pounded the wall in turn 1 under green on lap 99. With a tire going down, Darnell was saved by a caution for a spin by Peters two laps later. The two-time Truck Series winner finished 17th.

The Truck Series returns in two weeks for the inaugural Toyota Tundra 225 at Circuit of the Americas. The Saturday, May 22 contest is the second leg of the Triple Truck Challenge presented by Womply. The green flag is scheduled to drop at 1 p.m. ET with TV coverage provided by FS1.