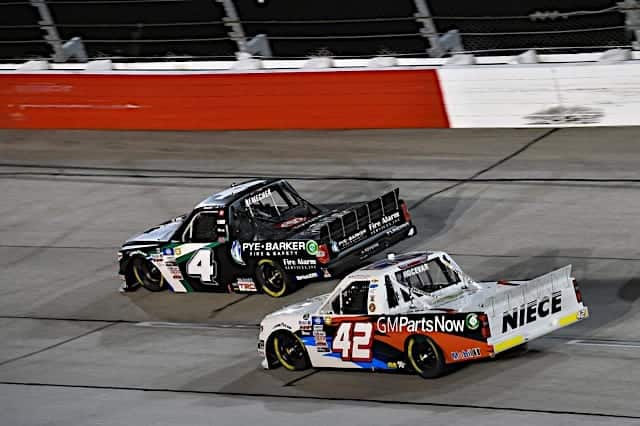 In only his 17th career Truck Series start, Hocevar started 14th in his first trip to Darlington, the track nicknamed “Too Tough to Tame.”

“Definitely a lot of up and down moments we had,” the 18-year-old Hocevar told Frontstretch. “We got put behind the ball early with a tire rub so we had to get off-cycle and stay out on 10-lap old tires.”

As a result of making an unscheduled pit stop, Hocevar finished stage one in 35th place, though still on the lead lap.

Once Niece Motorsports got him back on the same tire cycle as the leaders, his No. 42 Chevrolet came to life. Hocevar wheeled the No. 42 to a third-place finish at the end of stage two, therefore, earning eight stage points and upping his total stage points this season to 13.

Hocevar’s drive through the field caught the attention of FS1 broadcaster Michael Waltrip.

“That kid is the real deal.” –@MW55 talking about @CarsonHocevar ?

“Able to run fifth, sixth; once we got on even tires, the truck was really good, drove up to second, reeling in John Hunter Nemechek a little bit,” Hocevar said. “[Nemechek] was probably saving and I was trying to save too. Wish it would’ve gone green so we could’ve seen how it would’ve shaken out. Then the side skirt started to fall apart so we had to come to pit road. We missed the big one and put us in contention there in the end, just needed more laps.”

Although the side skirt repair cost him track position, Hocevar benefitted from an enormous crash on lap 118.

“I came on the radio before the restart and said, ‘At least if they all go down into turn 1 and decide to wreck, I’ll be able to avoid that.’ Sure enough, that’s actually what happened!” Hocevar said. “At least I had an idea that was a possibility, just didn’t know it was going to turn into a reality. Luckily, I picked the right line to drive through it and it reset our night.”

With excellent track position, Hocevar found himself in contention. He ultimately didn’t win, but he believed he had race-winning speed.

“We ran better than [race-winner Sheldon Creed] most of the [night],” said Hocevar, who is in the midst of his first full-time season. “He kinda fell off but still was a good truck. I think we were better than [runner-up Ben Rhodes]. There were times in the race I thought we were the fastest truck, but everyone’s so close, you need at least a handful of laps to get going.”

Don’t count us out yet, these @NieceMotorsport trucks can ride!! P3 is big, but man it would’ve been nice to win pic.twitter.com/cWKHdBS1cH

Additionally, it was Hocevar’s first race with new crew chief Phil Gould, who previously was atop the pit box for Brett Moffitt. When asked about the internal changes within Niece Motorsports, Hocevar said, “Changing crew chiefs was best for everybody.”

After eight races this season, the rookie from Portage, Michigan is 17 points above the playoff cut line, 11th in points (10th of those eligible for the playoffs). There are seven races remaining in the Truck Series regular season. For Hocevar, his finish at this historic track is “pretty big.”

“As a racer, I’m mad about today that I didn’t capitalize and win,” Hocevar said. “Come Monday, at our debrief meeting, I’ll feel really good about myself, this team and where it’s going. To be able to get some stage points, finish well and gain some momentum with my new crew chief Phil Gould.”

Lastly, Hocevar was proud to honor Benson with his throwback paint scheme.

This is the car @JohnnyBensonWeb drove to #NASCAR Cup Series victory lane at Rockingham in 2002. pic.twitter.com/r98jdeYlFk

“It would’ve been better if I had a Johnny Benson throwback scheme in victory lane,” Hocevar chuckled. “But hopefully Johnny, his family, all his fans were happy to see it on TV, watching us running up front, and contending for a win made them happy; I know he is.

“He was my only mentor on how to drive a stock car and be a racer. So to pay tribute to him and have a really good race car honored his fans and made it really special for sure.”

Indeed, the 2008 Truck Series champion is proud of his protege.

Thank you to @CarsonHocevar and @NieceMotorsport for honoring Johnny at Darlington. What an awesome finish!