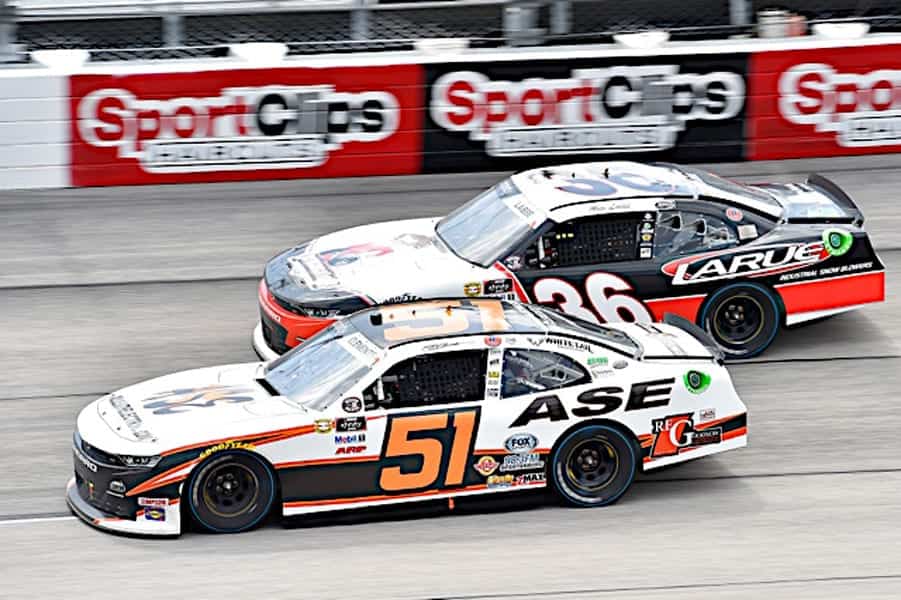 There’s a uniqueness about Darlington Raceway.

With its quirks and peculiarities, it presents challenges that drivers and teams are not likely to see at any other venue. So on one hand, it’d be plausible for teams to not put much effort into “The Lady and Black” given that little of what teams can glean is likely to transfer to the intermediate tracks that dominate the schedules in NASCAR’s national series.

However, for at least three underdog drivers — Jeremy Clements, Ryan Sieg and Alex Labbe — Saturday’s (May 8) Steakhouse Elite 200 ended up being a high-water mark of their NASCAR Xfinity Series seasons.

Following the disqualification of fourth-place finisher Noah Gragson, all drivers moved up a position in the final rundown.

Aside from Dash 4 Cash winner AJ Allmendinger, no one may have benefitted more than Clements’ No. 51 team.

It may be premature, but Clements could be on his way to a career-best season. That was reinforced Saturday as the South Carolina native finished a season-best fifth at the storied venue located in his home state, his first career top five on an intermediate track.

Clements, who wheeled a throwback to one of NASCAR Hall of Farmers Dale Jarrett’s UPS paint schemes, has been quietly consistent in 2021, finishing outside the top 15 just twice. Four times, Clements has found himself in the top 10 as the checkered flag has fallen this season. That’s already only one shy of last season when Clements posted a career-best total of five top 10s.

How consistent has Clements been? He is currently eighth in the points standings, one of just two drivers inside the top 13 without a top-five finish, a direct result of Clements having strong, steady finishes so far this season. That has his No. 51 Chevrolet firmly in the playoff hunt with roughly one-third of the regular season complete.

Clements wasn’t the only driver charging forward as he tried to interject himself among the frontrunners on Saturday.

Behind the wheel of the No. 39 car, Ryan Sieg put together an impressive run to come home eighth, becoming the top-finishing Ford in the field. The team made a crew chief change this week to put Shane Wilson atop the pit box in place of Kevin “Cowboy” Starland, a move which paid dividends right off the bat at Darlington. That should mean something to Sieg’s operation, given that they outran better-funded teams such as Team Penske and Stewart-Haas Racing on Saturday afternoon.

It was obviously a shot in the arm for Sieg and his team with it marking their fourth top 10 of 2021 after having seven of them last year. If Darlington was being sought as a step in the right direction, Sieg and his team certainly got it.

Lastly, Labbe continued a rebound from a rocky start to the season with his ninth-place finish being his first top 10 of the year after starting 23rd. In short, Labbe has been around at the end of races as of late after failing to finish three of the first five races. The course has been reversed as of late with three finishes of 21st or better in the past four races.