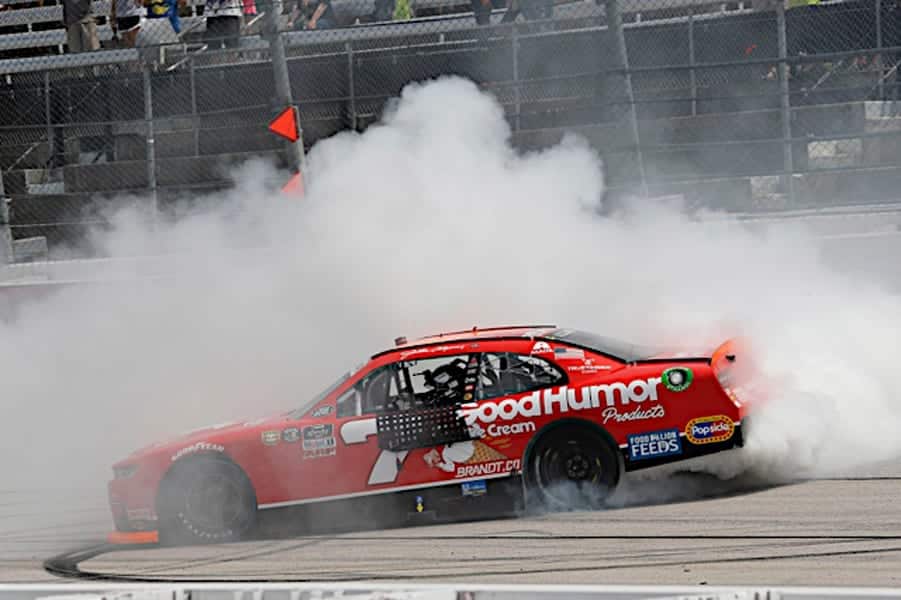 NASCAR’s Throwback Weekend has been a special deal to fans and industry members alike for years. On Saturday (May 8), it was no more special than for Justin Allgaier.

On a beautiful day in South Carolina, Allgaier bookended a perfect day for JR Motorsports by besting teammate Josh Berry on an overtime restart to win the Steakhouse Elite 200 in the NASCAR Xfinity Series. After team owner Dale Earnhardt Jr. paced the field in a restored Chevy Nova once driven by his late father, three of the four JRM cars finished inside the top seven, with Michael Annett coming home seventh.

The fourth JRM car, Noah Gragson, initially finished fourth and won the $100,000 Dash 4 Cash bonus. But NASCAR officials disqualified the No. 9 car during post-race inspection, relegating Gragson to the rear of the resulting rundown.

The victory is Allgaier’s second of the season, placing him with Austin Cindric as the only two drivers to have won multiple races through nine races.

“Fans being back in the grandstands, this is special,” Allgaier said. “The guys down in the pits, they just kept fighting. … To check off Atlanta and Darlington, I couldn’t be more appreciative of this team.”

The Earnhardt tie was strong even before the green flag flew, as Allgaier’s scheme was a tribute to Dale Earnhardt Sr.’s Daytona 500 car from 2000.

“This paint scheme has been so special to us […],” Allgaier said. “I hope y’all fans enjoyed the throwbacks. It’s a big deal to us.”

Believing he had nabbed the third Dash4Cash in a row, Gragson was still disappointed he wasn’t celebrating in victory lane.

“I’m pretty frustrated … Overall a good day, we led laps,” said Gragson. “That restart was the difference maker in how we lined up. Do they have a bonus if we win all four Dash4Cash? Because we’re on a pretty damn good roll.”

That roll came to a halt with a 40th-place finish instead of fourth.

The race was pushed into overtime by a late-race spin by Ryan Vargas, one of nine on-track cautions of the day. That set up a three-way battle between JRM drivers Allgaier, Berry and Gragson. Allgaier claimed the lead in turn 2 and led to the white flag. Brandon Jones made a power run for second but couldn’t close the door on Berry and came home third.

Cindric, who dominated stage one, crashed coming to the finish line off of turn 4, leaving him disabled on the frontstretch as Allgaier celebrated. Harrison Burton, in a throwback to his father Jeff Burton’s days with Richard Childress Racing, claimed the second stage win.

The NASCAR Xfinity Series hits the track for its next race at Dover International Speedway on Saturday, May 15 with coverage at 1:30 p.m. ET on FS1.