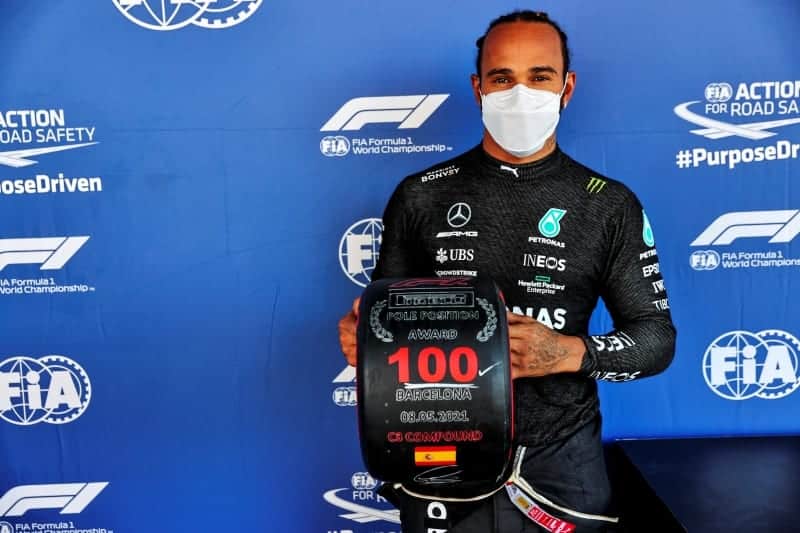 After being denied by his teammate Valtteri Bottas last time out in Portugal, Lewis Hamilton became the first Formula 1 driver ever to reach 100 pole positions. His best lap time of 1:16.741 at the Circuit de Barcelona-Catalunya was just 0.03 seconds ahead of Max Verstappen’s quickest effort.

The top three’s best qualifying times came on their first runs in Q3, Hamilton leading from Verstappen with Bottas one-tenth of a second back. When all three drivers were unable to improve on their final attempt, Sergio Perez, who spun early in Q3 and hadn’t set a time, became the only man who could swipe pole position from Hamilton. While the Red Bull driver’s lap started out quick, he finished a disappointing eighth, nine-tenths of a second behind his teammate Verstappen. Hamilton will start the grand prix from first for the fifth time in his last six visits to the Spanish track.

Ferrari’s Charles Leclerc continued his strong start to the season, qualifying fourth overall, albeit six-tenths of a second adrift of Bottas in third. The Monegasque jumped three places on his final run, squeezing ahead of Esteban Ocon’s Alpine in fifth and his teammate, Carlos Sainz,  who was just 0.04 seconds behind Ocon in sixth. Daniel Ricciardo had his third Q3 appearance of the year, putting his McLaren ahead of Perez’s Red Bull in seventh.

His teammate Lando Norris nearly didn’t make it out of Q1, slowed by heavy traffic at the final chicane on his first flying lap. Sebastian Vettel pushed him into 16th position, at risk of elimination, but Norris pulled out a blistering lap to go fastest overall in Q1. Yet his pace seemed to evaporate in Q3 as he could only come ninth, only beating Fernando Alonso, who starts 10th in the Alpine.

Although the Aston Martins of Lance Stroll and Vettel had decent pace and were hoping for a Q3 appearance, both drivers ended Q2 on the cusp of the top 10. Stroll’s first flying lap of Q2 had been good enough to progress to Q3, but he gradually dropped down the timing charts as Ocon, Perez and Ricciardo went quicker, and the Canadian was eliminated by just 0.008 of a second. Vettel also couldn’t find the extra pace needed to reach Q3, losing out by 0.05 of a second. Sandwiched between the two Aston Martins was Pierre Gasly, the Alpha Tauri driver pushed out by Perez at the end of the session. Alfa Romeo’s Antonio Giovinazzi and Williams’ George Russell were the other two drivers not making Q3, qualifying 14th and 15th respectively.

Alpha Tauri rookie Yuki Tsunoda was eliminated from Q1 by 0.007 of a second after Russell’s final fast lap put the Williams driver 14th on the timing charts. Before starting his last flying flap, Tsunoda had pushed on his out lap to pass two cars that had exited the pits in front of him, possibly shortening the life of his tires to the detriment of his lap time, as his teammate Gasly comfortably moved on to Q2. Tsunoda, who was livid on the radio, will start 16th. Also knocked out of the first session were, in order, Alfa Romeo’s Kimi Raikkonen, Mick Schumacher for Haas, Nicholas Latifi for Williams and Nikita Mazepin in the other Haas.

Along with hosting the Spanish Grand Prix, the Circuit de Barcelona-Catalunya has been the site of pre-season testing in recent years (except 2021, due to the pandemic), leading the drivers to become intimately familiar with the track’s 16 turns. But the drivers have been forced to relearn the start of the third sector after alterations to turns 10 and 11 were made ahead of this year’s event.

Back in 2004, turn 10 was redesigned into an incredibly tight left-hander which fed a sharp left-hand kink at turn 11. For 2021, this section of the track has been reshaped to more closely resemble its original design, with turn 10 now featuring a wider radius leading to a softer, more flowing turn 11. The smoother angles will likely produce quicker speeds through the sector, but could also affect passing opportunities.

The previous design’s tighter radius meant a longer braking zone at the end of the back straight and the potential for a dive down the inside of turn 10, and the new layout might eliminate that overtaking zone. Sergio Perez seemed skeptical before the race weekend, saying “Overtaking is already very hard, so removing the slowest corner in the circuit probably wasn’t the best idea.”

However, following other cars through turn 10 had been difficult in the past, and the less acute radius could permit the drivers to experiment with the racing lines through turns 10 and 11. This could let the drivers apply pressure on the car ahead on the exit of turn 10, perhaps forcing others into a mistake as they sweep into turn 12 or allowing cars to follow more closely and set up a move down the front straight. Charles Leclerc discussed this trade-off in the pre-race press conference: “I think there will be less overtaking in Turn 10, but if then it helps us to follow closer for overtaking before Turn 1, then that’s great,” he explained.

Overall, the drivers seemed fairly ambivalent about the changes, with Fernando Alonso saying that he doubts there will be “a huge impact on the laptime, on the set-ups, [and] on the overtaking possibilities.” Despite the reprofiling, the Circuit de Barcelona-Catalunya will probably remain a difficult track to overtake on.

Steve Bodie, who was Trackside and Final Inspection Manager, will become Group Leader ICE Operations for Red Bull, and Omid Mostaghimi, the top dog at Mercedes’ electronics squad, takes on the role of Head of Powertrain Electronics and ERS. Lastly, Anton Mayo transitions from Engineering Team Leader at Mercedes to Head of PU Design ICE at Red Bull.

While it is hard to say now how much of an impact these individuals will have on Red Bull’s future performance, the moves reinforce Red Bull’s commitment to their new power unit program and their desire to excel as both a chassis and engine manufacturer. Their new employees also come in with years of experience at the only F1 team to conquer seven straight constructors’ championships. And while members of both teams have played off the moves as standard practice in the sport, it also leaves Mercedes with some gaps to fill for the future.