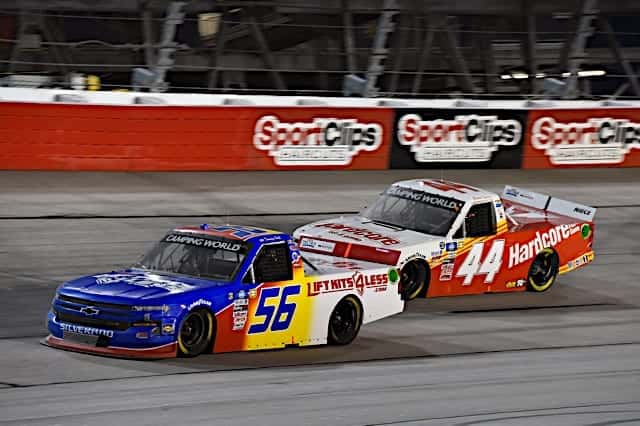 In a race that felt more like a superspeedway track than an intermediate, Timmy Hill was able to bounce back from a wreck to finish seventh Friday (May 7) in the NASCAR Camping World Truck Series’ LiftKits4Less.com 200 at Darlington Raceway.

Hill, piloting the No. 56 Kenny Irwin throwback, led lap 88 and earned stage two points before getting caught up in a wreck on lap 111.

As the field slowed to avoid a spinning Tanner Gray truck, Akinori Ogata came down on Hill further back in the pack and sent both spinning. Ogata ended up wrecking hard into the back of Gray, leaving both drivers done for the night.

Hard hits on the frontstretch at @TooToughToTame.

Hill was somehow able to drive off and come down pit road for repairs. His night was not over, though, as much calamity would come on the following restart.

Kyle Busch Motorsports teammates John Hunter Nemechek and Corey Heim held the front row on the lap 118 restart. Unfortunately, Nemechek spun his tires as the green flag waved and Austin Hill ran into him from behind. The track became a parking lot with multiple trucks crashing into each other, causing the race to be red flagged for cleanup.

But since Hill restarted near the back, he was able to avoid all the mess in front of him. A few more cautions came and Hill wheeled his way up to seventh place by the end of the night.

“It’s an extremely big deal to knock down top 10 runs for our small family team,” Hill told Frontstretch. “We are understaffed, under budgeted, and racing up from in an unconventional way. We take a lot of pride in that. Our race played out like a roller coaster. We led a lap and got sixth-place stage points, we got caught up in a wreck, and we rallied back for a seventh-place finish. I’ve never had quite the up and down day like this one.”

It was a good and much-needed points day for the underfunded Hill Motorsports team, as early crashes from Gus Dean at Daytona International Speedway and Tyler Hill at Las Vegas Motor Speedway set them back a bit.

“We have had a tough start to the year with two wrecks at Daytona and Vegas which ultimately forced us to skip Atlanta,” Timmy Hill said. “Now to be making gains back in the owners points, I feel like we have the ship back on the right path and looking forward to these summer races!”

The team sits 27th in the owners standings after Darlington and is looking for another good weekend when the Trucks take on Circuit of the Americas in two weeks. The Toyota Tundra 225 is set to air on May 22 at 1 p.m. ET on FS1.