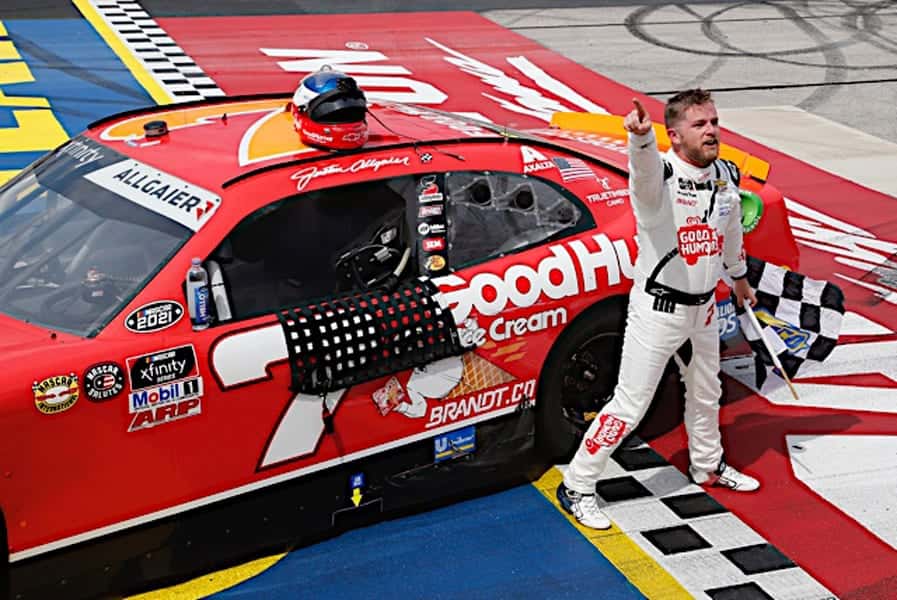 The Steakhouse Elite 200 at Darlington Raceway began with Dale Earnhardt Jr. pacing the NASCAR Xfinity Series field in a restored No. 8 Chevrolet Nova driven by his father, Dale Earnhardt. The race ended with Justin Allgaier, driving a JR Motorsports throwback scheme to the late Earnhardt, in victory lane.

Saturday’s (May 8) race had a series of cautions late in the race, with restarts that dictated how the race finished. Harrison Burton won the race off pit road during a caution for Gray Gaulding’s spin with 19 laps to go. On the restart, he spun his tires, and Josh Berry easily took the lead. One lap later, Joe Graf Jr. crashed, and on the next restart, Allgaier took the lead from Berry from the inside lane.

The final caution came out when Ryan Vargas spun in turns 1 and 2 with a handful of laps remaining. Despite the inside line prevailing several times during the race, Allgaier chose the top lane for the overtime restart. Berry picked the bottom and gave it his all, nearly spinning on the restart and wiping himself, Allgaier and likely many more out of the race. However, Berry didn’t wreck, and Allgaier drove to victory, his 16th in the Xfinity Series.

See also
Noah Gragson Disqualified at Darlington, AJ Allmendinger wins Dash 4 Cash
In addition to finishing fourth, Gragson was originally the recipient of Xfinity Dash 4 Cash for the third-straight race. But the disqualification removes the bonus from him, and he is classified 40th in the finishing order. AJ Allmendinger, who moved up to 12th as a result of the Gragson disqualification, inherits the Darlington Dash 4 Cash bonus. Other Darlington Dash 4 Cash participants were Jeb Burton (19th) and Austin Cindric (29th).

The disqualification of Gragson means that South Carolina native Jeremy Clements is elevated from sixth to fifth in the finishing order, giving Clements his first top five of 2021, the fifth of his career, and his first since Pocono last June.

Tires matter at Darlington Raceway, and during the competition caution, Tommy Joe Martins came down pit road while most of the field stayed out. Martins’ crew put on four fresh Goodyears and, in 20 laps, drove from 20th to fifth, collecting six stage points. Even though he was on far fresher tires than those around him, he drove to the top five naturally without the aid of cautions or cars dropping out of the race. Unfortunately for Martins, about halfway through the second stage, he hit the wall and had to pit during green-flag conditions. By the race’s end, he found his way back onto the lead lap and finished 14th. But his team and sponsor, Capital City Hauling, received good television time for their efforts.

As mentioned above, Josh Berry finished second and could have won the race if not for a caution. Due to a poor finish at the previous race at Talladega (April 24), Berry started 24th but soon found his way into the top 10 by the end of the second stage, claiming a fourth-place finish. Darlington is one of the more challenging tracks, and he had a quiet day and didn’t make any highlights for earning multiple “Darlington stripes.” But Berry has shown poise behind the wheel of the No. 8 JR Motorsports Chevrolet. He has quickly adapted, and while he may not have been considered a threat to win earlier in the season, Berry has quickly become one of those to watch week in and week out in the Xfinity Series.

Whether he has been in the ARCA Menards Series or the NASCAR Xfinity Series, Ty Gibbs hasn’t put a step wrong too many times. In Saturday’s Steakhouse Elite 200, the 18-year-old grandson of Joe Gibbs committed two pit-road speeding violations. Both times were under caution and resulted in him dropping to the rear of the field.

The first speeding penalty was issued during the stage one caution. There was plenty of time for Gibbs to recover, and he did drive his way back into the top five. But the second and final penalty occurred during the third-to-last caution when the entire field pitted. Not making up a lot of ground and with not much to lose, he pitted again during the final caution. Gibbs could only climb as high as 18th by the time the checkered flag waved before Gragson’s disqualification elevated him to 17th.

Gibbs had a strong run going and once again was quick beyond his years. Darlington should have been a top 10, impressive for a driver his age and compared to the experience around him, but penalties spoiled it. Gibbs shouldn’t hang his head too low; results don’t show the entire story, and those who watched know he was there.

The caution was thrown late by NASCAR for Ryan Vargas’ slide in turns 1 and 2, but the No. 6 car never entirely spun around and was rolling, regaining speed before the caution was displayed. By the time the race was going to be restarted, NASCAR Overtime was going to be activated. Despite only having two green-flag laps guaranteed, some teams opted to pit, including some top 10 runners. Maybe it was a good idea to come down for four fresh Goodyear tires for seventh-place AJ Allmendinger, but the problem was, not enough cars pitted. A total of 17 lead lap cars stayed out.

Pitting under caution can be a gamble at any point of the race. However, I imagine several crew chiefs will want to hit rewind to redo that pit call. Burton is rescored as the 10th-place finisher, Allmendinger 12th, and Cindric 29th after Gragson failed post-race inspection.

As previously mentioned, NASCAR disqualified Noah Gragson and the No. 9 JR Motorsports team after failing post-race inspection. Gragson was stripped of the $100,000 Xfinity Dash 4 Cash bonus, in which he was three for three in 2021. No driver had won three of the Dash 4 Cash race bonuses in previous seasons, let alone sweep all four. Gragson had made history and arguably had a solid opportunity to write more next week at Dover International Speedway, but that is over. It has been a difficult season for Gragson, despite showing speed. The No. 9 team needs to regroup and win soon; they are too good not to achieve more.

Never count out Alex Labbe for a solid run at a road course, and he can be sneaky at superspeedways. But Darlington? While Labbe doesn’t have a horrible record at Darlington Raceway, he managed to pull off a 10th-place finish in Saturday’s Steakhouse Elite 200, then was awarded ninth when Gragson failed post-race inspection. He ran around the high teens for most of the race, where he has finished in the past in four previous Darlington starts. The ninth-place finish bested Labbe’s previous best at Darlington of 16th and was his first top 10 of the 2021 season. It’s his eighth career top 10, but his first not at a road course or superspeedway.

An honorable mention goes to Landon Cassill and JD Motorsports. Cassill was in the top 10 at one point late in the race but settled for 11th after Gragson’s disqualification. The 11th-place finish bests his season-high of 12th on the Daytona International Speedway road course.

“First of all, y’all [the fans] are awesome. Fans being back in the grandstands, this is special. Y’all don’t realize how much energy you feed in what we do. I’ll be honest with you, there is this guy right over here with a navy blue shirt, and he gave me the middle finger with both hands on that last caution and gave me a lot of motivation to that one.” – Justin Allgaier

Darlington was the perfect race to kick off 11 straight weeks of Xfinity Series racing after having only two races in the past six weeks. It would be nice to see fewer off weeks during the spring months next season. Getting back to Saturday’s race two months ago, no one would have believed you if you said all four JR Motorsports cars were going to finish in the top seven in any given race. Their speed was there, but performance and ability to close races were lacking. JRM looks to have hit its stride after winning three of the last four races.

In contrast, while this team has two top 10s in the last four races, Austin Cindric and Team Penske have cooled after a blistering first five races to begin 2021. They have led laps but haven’t been knocking on wins in the last four races compared to the first five. Has the lack of racing the past month and a half helped JRM and hurt Team Penske? Whether the multiple off weeks have hurt or helped, the 2021 season still has a long way to go, and we aren’t even halfway through the regular season. But one driver has stayed a constant threat since February: Daniel Hemric, and his day is coming.

The next three weeks to close out the month of May for the NASCAR Xfinity Series is quite a diverse trio of tracks. Next Saturday (May 15), the final Xfinity Dash 4 Cash race is on the 1-mile, high-banked concrete oval of Dover International Speedway at 1:30 p.m. on FS1 and MRN. Justin Allgaier, Josh Berry, Brandon Jones and AJ Allmendinger will fight for the final $100,000 bonus of 2021. Then on Saturday, May 22, it’s the inaugural NASCAR race weekend at Circuit of the Americas – a road course in Austin, Texas. Then Charlotte Motor Speedway, a 1.5-mile quad-oval, caps off May for the NASCAR Xfinity Series on Saturday, May 29.

Would have watched some of the race had I known it was on at 1:00 and not 3:00. While I prefer 1:00 start times, I’ve pretty much been “trained” to expect races to start 3:00 or later. I turned the TV on at 3:30 to check out what was happening and Allgaier was victory lane. Oh well.

FOX is showing the National Orange Blossom Festival on their main network at 3 PM instead of the example of Brian’s product at Darlington. ORANGE BLOSSOMS!!!!! Any doubts about NA$CAR deserved ranking at FOX?

Horrible caution call at the end. NASCAR just trying to create another big one like the truck race.

Every one watching new the caution would come out for safety reasons. Right?

At least we had some underfunded teams have good finishes.