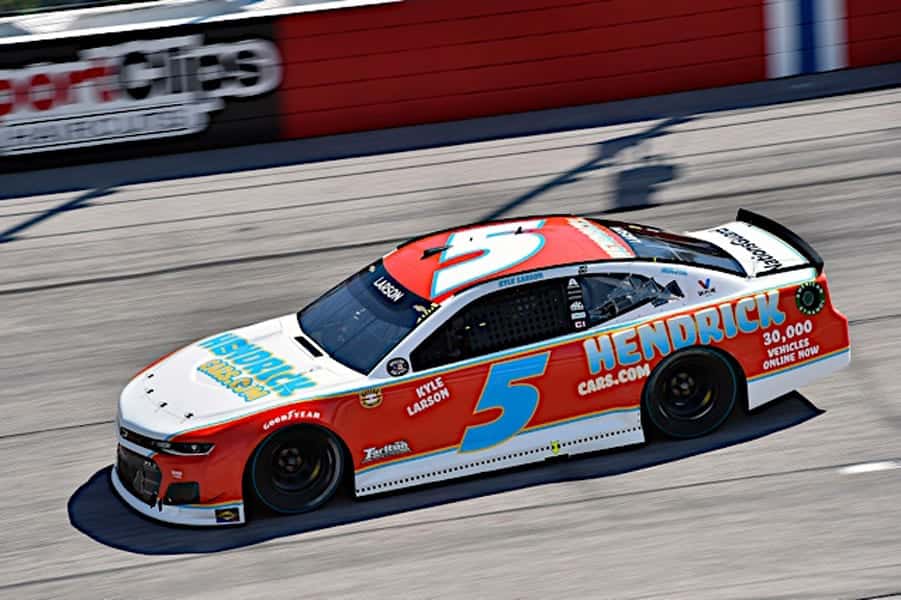 Martin Truex Jr. may have been the story of the 2021 Goodyear 400, but Kyle Larson almost stole the show. The Hendrick Motorsports driver came within a few car lengths of his first Darlington Raceway victory Sunday (May 9) before settling for second after giving Truex a run for his money in the final laps.

“I was just hoping he’d make a mistake,” Larson said about Truex, who led 248 of 293 laps en route to a dominant victory on Mother’s Day. “He was just a little bit better than I was in the long runs. So, just wish maybe I could have taken advantage of that opportunity, but thought it was going to play out a little differently.”

Larson fought hard to get to the front, charging back from a speeding penalty after finishing stage one in fourth place. By the end of stage two, the No. 5 Chevrolet driver had climbed back to fifth, putting Larson in position to make a late run.

A green-flag finish to the final stage opened the door for a car with long-run speed. After final pit stops, Larson made a surprising run at Truex, who had won the previous stage by a whopping 14 seconds. The battle intensified with 25 laps to go, peaking with Larson’s three-wide split of the lapped machines of Tyler Reddick and Ryan Newman.

The momentum from Larson’s charge got him as close as a car length to Truex’s No. 19 Toyota. But in the final 10 laps, his chewed-up Goodyears were no match for the leader as he faded to 2.5 seconds behind at the finish.

“[I thought that maybe I could] get [Truex] to use his stuff and stay patient. He was a little better on the longer runs,” Larson said. “We were not good all day, but passed a lot of cars and found our way to the front.”

.@KyleLarsonRacin hung around for maybe too long thinking @MartinTruex_Jr would use up his stuff, but ultimately it wasn't his day. pic.twitter.com/Tn1XArOR3Y

In the end, a final-stage deficit that once stretched as far as seven seconds was too much for Larson to overcome. His bid to close the gap appeared to need a little more tire conservation. But babying a car at Darlington is easier said than done — especially considering the circumstances.

“When the leader is in front of you,” Larson said, “It’s tough to remind yourself (to calm down).”

Larson’s second runner-up result of the season is small consolation for his string of Darlington near misses. In seven career starts at the Lady In Black, Larson’s collected six top-10 finishes, led 500 laps but failed to reach victory lane in the Cup Series.

That string of close calls extends into his 2021 season. After winning at Las Vegas Motor Speedway in March, Larson had two dominant races that did not go his way. A late-race pass by Ryan Blaney ruined his chance to win at Atlanta Motor Speedway before a controversial caution for a runaway tire erased his lead at Kansas Speedway last weekend.

For NASCAR Throwback weekend at Darlington, Larson had a special scheme on the No. 5 Chevy, which was painted similarly to his first race car. The fancy design was small consolation for another race that slipped through his grasp, although the second-place performance is his first top five since Martinsville Speedway a month ago.

The NASCAR Cup Series now heads to Dover International Speedway, one of Larson’s better tracks. The Drydene 400 takes the green flag on Sunday, May 16 at 2 p.m. ET on Fox Sports 1.

A good steady race for Kyle. Maybe he’s maturing. Another top 5 for Byron too. 37 car race, bubba beat the same 13 cars he should beat every week, plus the three or more wrecked cars he counts on every week. He even helped Kurt. Someone said the other day that Newman should be in the hall of Fame because everyone with 700+ starts is in it. Michael Waltrip-783

I have a theory why the scoring pylon stops at 20. If Bubba is worse than 20 they don’t want to show it. If Bubba is in the top 20 they revel in it. We won’t see lower than 20th very often for a long time.

Good theory. I think bubba’s strategy is just to survive till the end. He counts on wrecks and mechanical failures to move him to a better finish, knowing his JGR car should beat the same 13 cars every week if he doesn’t mess up. If the number of cars starting drops to 35, well bubba can probably get a top 20 every week.

Probably not because, chances are, the 3 cars that don’t show up that week are part of the 13 bottom teams that he counts on beating every week.

I still wonder who you guys think would have been a better fit in that car? Since I dont think any winning drivers are not under contract. Just haven’t heard anybody say who would have been any better.

Eric Jones. He took Bubba’s place at Petty. Past winner and Xfinity Champ. But for some reason Gibbs/Yota didn’t want to keep him in one of their cars.

Interesting choice. And of course if Gibbs et al didnt want him in one of their cars he probably wasn’t going to be in a satteline car. Still a good call.