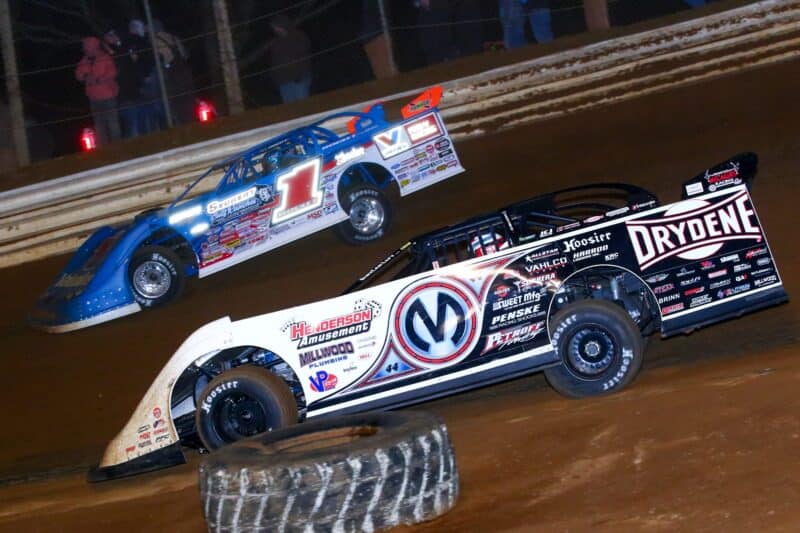 Chris Madden was a late addition to the roster of World of Outlaws Late Model regulars this season, but he’s here to contend if the Dairyland Showdown was any indication. Madden led the majority of the $22,500-to-win Saturday night feature at Mississippi Thunder Speedway in Wisconsin, keeping a resurgent Brandon Sheppard at bay for much of the May 8 event.

. @DIRTVision REPLAY: @chrismadden44 gets his second win of the season after an action packed Feature at @ThunderAtMTS! pic.twitter.com/fn0DbI3Ry4

The win was huge for Madden in stymying the momentum of Sheppard, the current WoO late model point leader and defending series champion. Madden has run well since joining the WoO tour, but Sheppard was threatening to go on a tear after smoking the field in the second half of Friday night’s WoO feature at the same track.

“Smooth Operator” Bobby Pierce was running down the leaders in Saturday’s 60-lap feature and was the odds-on favorite to many in the field, having previously won the two longest races of the WoO late model season at Farmer City and Boone. Pierce, however, would slam the wall inside of 10 laps to go and have to be towed off the track.

Donny Schatz was leading at his boss’s track in his boss’s car inside of five laps to go, but couldn’t get to the high side fast enough to stop Sheldon Haudenschild from grabbing the $10,000 Saturday night World of Outlaws feature at Eldora Speedway, leaving Schatz still stuck at 299 career feature wins.

For Haudenschild, the win was a redemption song after his machine was found to be too light in post-race inspection in the rain-delayed Friday feature that ran Saturday afternoon (won by Brent Marks).

Dresden, Ohio’s Devin Moran led flag-to-flag to win the $5,000 Jackie Boggs Memorial Friday night on the Iron-Man Late Model tour at Atomic Speedway in Ohio. Moran was the class of the field in a caution-filled race, though his No. 9 got a major boost when last week’s Florence winner Josh Rice slammed the turn 4 wall after an ill-advised slide job on Moran for the race lead. Lucas Oil Late Model Dirt Series regular Tyler Erb saw a top-five finish evaporate on the race’s last lap when he jumped the banking in turn 2.

Jonathan Davenport’s red-hot 2021 continued with a weekend sweep of the Comp-Cams Super Dirt Series late model events at Batesville Motor Speedway in Arkansas. Davenport cruised to victory after a methodical climb to the front Friday, then on Saturday led flag-to-flag in the 68-lap finale event. Columbus, Miss.’s Brian Rickman made a real race of it with 10 laps to go, getting to within a bumper of Davenport before overdriving turn 4 with three laps left and leaving Superman to fly into the sunset. Davenport pocketed $17,000 on the weekend.

Brian Shirley and Tanner English started on the front row for both rounds of the MARS late model series Thaw Brawl at La Salle Speedway in Illinois this weekend, but neither could turn that track position into a trophy. Albuquerque, N.M.’s Garrett Alberson scored the $12,000 finale win Saturday afternoon in a persistent drizzle, telling the crowd post-race that the rain saved him after opting to run a softer tire for the feature. Former ARCA dirt winner Ryan Unzicker won Friday night’s $3,000 feature.

Finally, Jimmy Owens led flag-to-flag to win the $10,053 Spring Nationals super late model race at Smoky Mountain Speedway in Tennessee Saturday night, holding off Brandon Overton’s late-race charge as the No. 20 navigated lapped traffic. The win was by far the biggest of 2021 for the defending LOLMDS champion.

Wisconsin dirt track staple Brent Larson put on a clinic in the early laps of Friday’s WoO late model feature at Mississippi Thunder, taking point leader Sheppard and pole sitter Tyler Bruening to school in the opening 10 laps by running a low line that no one else in the field could make work. Larson eventually faded back behind eventual winner Sheppard, but still scored a career-best runner-up finish.

Yes, Tyler Courtney’s streak of consecutive USAC national sprint car wins at Eldora came to an end at five after “Sunshine” finished second to Robert Ballou in a thrilling finish Saturday night. But that close call didn’t come from any lack of talent or effort. Courtney put on an absolute clinic all weekend in Tony Stewart’s backyard while the finish between him and Ballou may have been the best anywhere on dirt this weekend.

And yes, we’ll give Ballou a shout-out as well for being the one to hold Courtney off.

Red-hot Tim McCreadie was forced to miss Friday night’s opener at Mississippi Thunder dealing with kidney stones, but he kept the momentum up with a top-five finish in WoO late model competition in Saturday’s finale.

Wheatland, Iowa’s Justin Kay scored his 100th career IMCA late model victory at Marshalltown Speedway on Thursday night. That mark stood for all of two days, when Kay’s win at the Davenport Speedway in Iowa made it 101.

Rickman had every opportunity to bodyslam Davenport to take the win in the Bad Boy 98 finale at Batesville on Saturday night. He may have come up just short to the hottest driver in America racing clean, but Rickman’s talent put on display to not play dirty spoke volumes. Good showing.

Lastly, we have the runner-up for finish of the weekend. Spartanburg, S.C.’s Anthony Sanders scored his first career Ultimate Super Late Model Series win courtesy of a three-wide pass of Southern late model giants Ross Bailes and Chris Ferguson on the last lap at Cherokee Speedway in South Carolina… before cutting a tire of his own on the cool-down lap. Skip to 2:45 in the replay below to see the finish.

All the enthusiasm Giovanni Scelzi had for his run in the dash for the second WoO feature at Eldora Saturday went out the window fast, with Scelzi going backwards until hard contact with the wall triggered a nasty crash with Carson Macedo.

Dropping down to run the Comp Cams Super Dirt Series has done nothing to undo Ashton Winger’s hard luck in 2021. Winger led the first half of Friday’s super late feature at Batesville only to cut a tire shortly after losing the lead, then got involved in a wreck during Saturday’s feature.

It’s bad enough news whenever a factory stock car rolls, but when a 78-year-old driver does it, huh boy. Fortunately for all involved, Facebook posts to the Lebanon Midway Speedway page indicate that Jim Bunton is OK despite pulling that exact feat Saturday night.

Posted by Volusia Speedway Park on Saturday, May 8, 2021

And for this week’s obscure ARCA sighting, I’m going solely off of hometown addresses to confirm, but it appears the same Jill George that endured one of the worst wrecks a televised ARCA race has seen finished 16th in Thursday night’s late model feature at Marshalltown.

If you didn’t call your mother yesterday, stop reading this column and do it now. Your grandmother too.

Saturday night’s invocation at the Mississippi Thunder Speedway not only went longer than the national anthem, it included a call for a moment of silence. Seemed a bit redundant, didn’t it? It’s not like Wisconsinites don’t know how to be respectful.

With IMCA California Speedweeks switching to a passing points format for this year’s events, I wasn’t even able to make it to the weekend before pulling my hair out in frustration dealing with this fatally flawed format. However, since this asinine setup appears to be going nowhere, can we at least make an adjustment that ensures that a driver who wins a heat race, no matter where they start, scores the most points? Racing is all about winning, and heat racing is racing.

Having been to the Brownstown Speedway in Indiana before, and knowing that this track is run well and draws huge crowds, I feel for them having the rough start to 2021 that they have (it’s the same track that had to suspend a LOLMDS program cold turkey after three different super late models went flipping on a bumpy track surface). The controversy this weekend… when are race fans entitled to a refund?

We were at least half way in the first feature before the rain came. Since the Indiana Pro Late Model feature was half…

Posted by Brownstown Speedway on Saturday, May 8, 2021

I have to agree with those posting in defense of the racetrack… it is a standard practice across the country that once the heat races are done, the program is considered run in full. The rules of the road aren’t greedy or ambiguous… I’ve been to nearly 100 racetracks in this country and I don’t know that I’ve been to one where that isn’t the procedure when heats are employed.

The one item worth discussing further here? The scoreboard and determining where in a feature race scoring is. As I said, I’ve been to nearly 100 racetracks across the U.S., and unfortunately when getting away from major NASCAR tracks broken scoreboards become par for the course. That’s problematic enough for those trying to watch a race without video replay and/or in a field of cars they’re not familiar with.

Further complicating the matter, however, is how tricky determining whether a lap has been scored can be at a dirt track. Depending on the track or series running, the entire field of lead-lap cars may have to cross the start/finish line for the lap to count. That creates an impossible situation for most scoreboards, which are going to pull their data straight off transponders as they cross the line.

Changing to a simpler scoring mechanism for laps to count, i.e., when the leader crosses the line, the lap gets scored, would go a long way to sorting some of this confusion out. After all, as stated earlier, racing is all about winning. The leader should be dictating the pace of race completion.

I don’t pretend to understand pretty much anything that happens in California, but if you’ve been waiting over a year to get fans back in the grandstands, like they have been at Silver Dollar Speedway, creating a mess that requires the cops to show up en masse seems like a stupid idea (follow the link for the images).

? Jase was there and he gave his witness statement to me ?*okay he says some men were talking about male genitalia,…

Posted by Shannon Elizabeth on Saturday, May 8, 2021

For as much as the racing community loves “racing,” we seem to get in our own way more often than not.

$22,500 – Largest posted purse of the weekend, to win the WoO late model finale of the Dairyland Showdown at Mississippi Thunder Speedway in Wisconsin

Where it Rated (on a scale of one to six cans with one a stinker and a six-pack an instant classic): We’ll give the weekend four cold Bud Lights, at $2 apiece, to go along with the return of fans to Eldora. The sprint cars, for the most part, put on a good program, and the weekend’s larger late model shows, both in Wisconsin and down south were worth a view. Tarnishing the weekend were a large number of rainouts and driver injuries seen coast-to-coast.

Up Next: Late models again top the bill this coming weekend, but it’s a new series in town. The Ultimate Super Late Models invade Virginia Motor Speedway Saturday night for the $20,000-to-win King of the Commonwealth. Coverage will be provided on Speed 51.