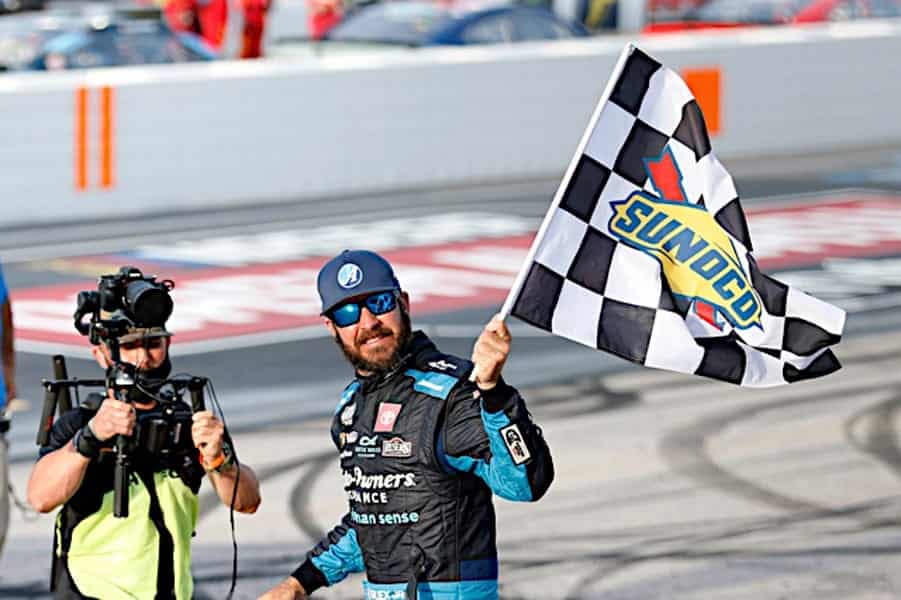 Martin Truex Jr. already entered Darlington Raceway as the only driver in the NASCAR Cup Series field with multiple wins this season.

That’s what made his performance during Sunday’s (May 9) Goodyear 400 that much more impressive, leading 248 of 293 laps en route to his third victory in 12 starts thus far in 2021.

The 2017 Cup Series champion now has wins at Phoenix Raceway, Martinsville Speedway and Darlington. On the surface, those tracks have absolutely nothing in common. And in most cases, that’s true.

But there is one thread sewing them together: the high-horsepower, low-downforce package NASCAR runs at each of those three tracks. And the more horsepower available for Truex in 2021 — 750 HP as opposed to 550 HP on the larger racetracks — the better he seems to be.

“I love low downforce. That’s all I’m going to say,” Truex said after Sunday’s victory. “I love it.”

His success with a car that requires more driver input doesn’t come as a surprise, not even to Truex himself. When NASCAR ran low-downforce packages, primarily from 2016-2018, Truex nabbed an astounding 12 race wins and the 2017 Cup title.

“We very well could have won all three championships,” Truex said of that stretch. “We were right there in all three and won a lot of races. Big fan of this kind of racing. Really enjoy it. Today was a heck of a challenge.”

The focus on 750-HP events is no coincidence for Joe Gibbs Racing, particularly understanding the title race is decided at Phoenix while the penultimate race of the season falls at Martinsville. Aside from Truex’s victories, young Christopher Bell also won at the Daytona International Speedway road course, another low-downforce event.

“I think this offseason we really as a group — and I think as a company — wanted to make sure that we have the 750 package dialed in because that’s the championship race, and a big percentage of the playoff races are with this package,” Truex said. “That feels great. I really, really enjoy this package, and so that’s even more of a bonus to get to win in it.

Another contributing factor to Truex’s success, perhaps, is that he’s having fun behind the wheel with more power at his disposal.

”I feel like I can make more of a difference when we’re in the low-downforce package, especially on these bigger tracks,” Truex said. “I think that I’ve always been a guy that’s done a lot of my driving with my right foot and the brake pedal, and the 550 (HP) tracks, you’re pretty much wide open. Not all the time, but if you have to lift, usually you’re dead in the water.

Second-year crew chief James Small acknowledged a one-win season in 2020 was enough of a wake-up call to change the program’s direction despite teammate Denny Hamlin accruing seven wins next door.

“We were OK last year as a company at short tracks, and then we went to Phoenix and got our asses whooped by [Team] Penske and Hendrick [Motorsports],” Small said of last year. “The whole company worked really hard in the offseason just trying to find all the little things and work on the aero and work on just everything we can…

“It’s hard to find gains. But everybody back there has been busting their chops really focusing on this because we know it’s going to come down to Phoenix if we can get there.”

Surely, the Truex team’s efforts on their high-horsepower setups seem to be setting them up well for postseason success. But the playoffs don’t begin until Sept. 5 when the series returns to Darlington.

Maintaining that advantage from May through a legitimate championship run may prove to be the biggest challenge for the No. 19 team.

“I think you just try to look at, ‘OK, what are the little things that we can do to make the car better? And then, as a company, you’re always looking for more.”

In the short term, five of the next eight points-paying races are at tracks featuring the 750-HP package, including the next two weeks at Dover International Speedway and Circuit of the Americas.

Of course, both Dover and COTA are so unique, they may prove worthless toward building any late-season momentum. That doesn’t necessarily matter to Small.

”Really, we’re just all in every week on whatever race,” Small said. “Right now, we need to get wins, bonus points. We go back to a lot of these tracks, so really hitting this well right now definitely is going to help us for when we come back in the [playoffs].

“It’s all about points, and it’s building a buffer. I think today, we executed that perfectly, so we’re going to continue that and just keep going, building that gap.”

The No. 19 team looks to cushion its playoff advantage when the NASCAR Cup Series returns to the track at Dover on Sunday, May 16 for the Drydene 400 at 2 p.m. ET on FS1.