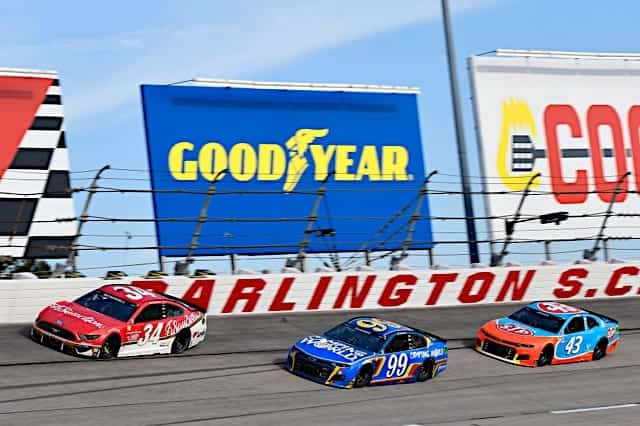 Throwback weekend is a great time. I’ve never been to Darlington, but I have a standing offer to go and stay with my friend’s parents if I ever go. Had they kept the Southern 500 in early April, I would have taken them up on it. Even with two dates, the schedule doesn’t really work for me.

In practice, the throwback weekend is almost like Halloween. People wander the grounds in South Carolina in vintage gear, and even authentic fire suits. Michael Waltrip broke out no less than three during the weekend, including his Hawaiian Punch fire suit from his rookie year in Cup (1986). Corey LaJoie wore a vintage Alan Kulwicki fire suit in the garage Sunday prior to the race.

Let’s get it. @NASCARONFOX 3:30pm. pic.twitter.com/eZoUGtkgEZ

Obviously, LaJoie didn’t wear this fire suit during the race because it no longer meets the minimum fire suit requirements. He couldn’t wear that thing at a local short track if he wanted to. Fans have been known to break out fire suits and wear them at the track. I know my friend Brien wore the very fire suit that Ernie Irvan wore during the 1990 Daytona 500 at Darlington a couple of years ago. Since that fire suit was mostly black, I have no doubt that he melted in the Labor Day weekend sun.

NASCAR RaceDay was just one example of the Halloween mentality as Larry McReynolds and Jamie McMurray were dressed as if they made a Party City trip before heading to the studio on Route 24, complete with fake mustaches. On the other hand, Shannon Spake wore her mother’s vintage wedding dress on the show.

For the longest time, Mother’s Day has traditionally been either an outright week off, or Sunday off at minimum. The rescheduled Olympics in Tokyo this year more or less prevented that. As a result, there was a series of Happy Mother’s Day greetings on-air, including from Jamie Little’s kids. We also saw Joey Logano invite his mother, Deborah out for lunch. He then drove her to their meal in a Polaris side-by-side in a hurry, scaring the bejesus out of her.

In addition, Kaitlyn Vincie did a one-on-one interview with Ryan Blaney and his mother, Lisa. Topics here included Lisa’s role in Ryan’s growth as a human. Since Ryan’s father Dave wasn’t around all that much when he was growing up (his childhood coincided first with Dave’s time in the World of Outlaws, then his NASCAR career), Lisa was critical of anything Ryan did.

Probably the most interesting thing that Lisa said was about “preparing herself for the fact that [Ryan’s] going to crash.” Yes, it’s an inevitability if you drive a race car, but that’s going to be hard to take when you’re talking about your flesh and blood.

In addition, a significant amount of time was spent talking about Alzheimer’s Disease. Ryan’s grandfather, Lou Blaney, suffered from the disease and as a result, Ryan has few memories of Lou’s career in motorsports.

As compared to last week in Kansas, FOX Sports more or less fixed the Grid Walk awkwardness by adding an additional person to the crew with a boom mike instead of having Michael Waltrip thrust his own mike into the driver’s faces. Still looked a little odd, but better.

Also, Leonard Wood made an appearance on the show to talk about his half-scale Ford 427 Le Mans engine. Trust me, that thing is a work of art. Last month, the Wood Brothers Racing Twitter (run by Jon Wood) detailed the construction of this engine. Check it out.

this time last year, Leonard needed something to do. one thing leads to another and the idea came to make a 50% scale 427 Ford engine like the Dan Gurney/AJ Foyt '67 Le Mans winner. Like everything else Leonard makes, it went from regular to extreme very quickly

With the low downforce rules package in use Sunday, you had a very different race as compared to last September’s Cook Out Southern 500. Tire wear was likely the most substantial we’ve seen at Darlington since the track was repaved in 2008.

Early on, Kyle Busch appeared to be one of the best drivers out there. He was able to snatch the lead away from Kevin Harvick early on. There was a lot of chatter prior to the race about Busch leading his 18000th lap in the Cup Series prior to the race. Right before he could do that, his right rear tire unraveled and resulted in him spinning out.

Interestingly enough, this was the only unraveled tire that I know of from Sunday as of this writing. Do I think Busch was the only driver that dealt with this? No.

I wouldn’t be shocked if Ross Chastain had that happen when he ran from the Busch caution all the way to the end of stage one on the same set of tires. I say this since he seemed safe to stay on the lead lap until the last few laps. Then, his car fell off a cliff and was seemingly four seconds a lap slower than everyone else. I just can’t prove it.

As you know, Martin Truex Jr. whooped some serious tail Sunday. At the end of stage two, he had a legitimate 14.516-second lead. That is pretty much unheard of. When that happens, the typical way that you broadcast a race really goes out the window.

In and around the restarts, there was decent racing for position. Once you got away from those restarts, it got a little thin at times. When the lead lap gets chewed up, FOX Sports 1 tends to narrow their focus — meaning if you’re not on the lead lap, you’re not worth our time. I don’t think that’s the case, but it can look that way at times.

Some of the camera shots were not necessarily the best. The two biggest incidents occurred in nearly the same spot exiting turn 2. FOX Sports 1 all but missed what happened to cause Aric Almirola’s big wreck on lap 6. Most of the camera angles in that part of the track missed the start of the incident. Only a speed shot showed that Ricky Stenhouse Jr. was behind Almirola at the time of the wreck. We have to assume that Stenhouse got in the back of Almirola, but we couldn’t tell for sure.

During the race, Clint Bowyer was expressing amazement at the knowledge that Mike Joy was bringing onto the broadcast. Especially given that this was Throwback Weekend, historical context is critical when it comes to explaining the significance of paint schemes and such, let alone the actual racing product.

Here’s the thing that gets me, though: I already know that all of the on-air personalities receive massive tomes of information prior to the race. Some of that comes from the pit reporter’s notes. Others are printed notes from stat sources. NASCAR provides a bunch as well.

While I doubt that Bowyer has an entire home office filled with notes like Joy does (he has mentioned this to me in the past in e-mails), I don’t see why Bowyer couldn’t have a whole bunch of random things that he can pick and choose when and where to throw out there.

It’s similar to what Jeff Burton told Frontstretch back in 2018. He claimed at the time that he doesn’t read 90 percent of the stats that are given to him each week, but it something stands out to him, he’ll dive in.

Given that this was Darlington, the pit stops happened often enough that there’s only so much action before everyone’s stopping again and the focus has to shift. A full run on tires Sunday was somewhere between 30-45 laps.

Overall, this was the most spread out and least wreck-strewn of the three races in Darlington last week. Even though there were some bad patches, it was probably the best broadcast of the three that aired on FOX Sports 1 last weekend. There was some good racing that FOX Sports 1 brought to viewers, especially early on and towards the end.  Kyle Larson tried to make a true race of it, but just couldn’t get it done.

Last week, NBC Sports made an announcement about their Indianapolis coverage. In addition to the regular group of on-air commentators, Jimmie Johnson will be on hand for the Indianapolis 500 as an analyst along with the returning Danica Patrick (Tony Kanaan will be racing his No. 48 since Johnson isn’t driving on ovals this year).

In addition, Steve Letarte will make his Indianapolis 500 debut as an analyst, primarily spending his time on the Peacock Pit Box. Dale Earnhardt Jr. will also appear on pre-race coverage.

Finally, there’s a new Hollywood racing movie coming. Deadline reported Wednesday that Hilary Swank is set to star as Janet Guthrie in a new film based upon the book, Speed Girl. There’s no mention of Guthrie being involved with this film. As you may remember, Guthrie wrote her own autobiography about her life, Janet Guthrie: A Life at Full Throttle. This will be worth watching in a couple of years once it gets made.

That’s all for this week. Next weekend, the NASCAR parade travels to Delaware for its sole visit of the year to the Monster Mile. The NASCAR Cup Series will be joined there by the Xfinity Series. Meanwhile, the NTT IndyCar Series truly gets May underway with the GMR Grand Prix on the Indianapolis Motor Speedway’s road course. IMSA also returns to action after nearly a month off at Mid-Ohio Sports Car Course. TV listings can be found here.

We will have critiques of the Cup and Xfinity broadcasts from Dover in next week’s edition of Couch Potato Tuesday here at Frontstretch. We currently plan to have multiple editions of The Critic’s Annex this week in the Frontstretch Newsletter. They will cover the Truck and Xfinity action from Darlington.

Regarding… “Early on, Kyle Busch appeared to be one of the best drivers out there.” When his tire blew so quickly I thought “he must have forgotten he was at Darlington and made the rookie mistake of racing harder than he should have and not taking care of his tires”.

I was annoyed that FOX didn’t seem to have enough cameras when they could not show a decent replay of either the Almirola or Custer wrecks.

I like the throwback race even if it’s getting a bit predictable, but I think it comes off better at night under the lights.

Mikey should have been in the wedding dress.

Just a reminder that Dover didn’t “lose” a race this year – they merely transferred their second race to their affiliate track, Nashville.

Take some of the cameras out of the cars and put them around the track for better coverage.