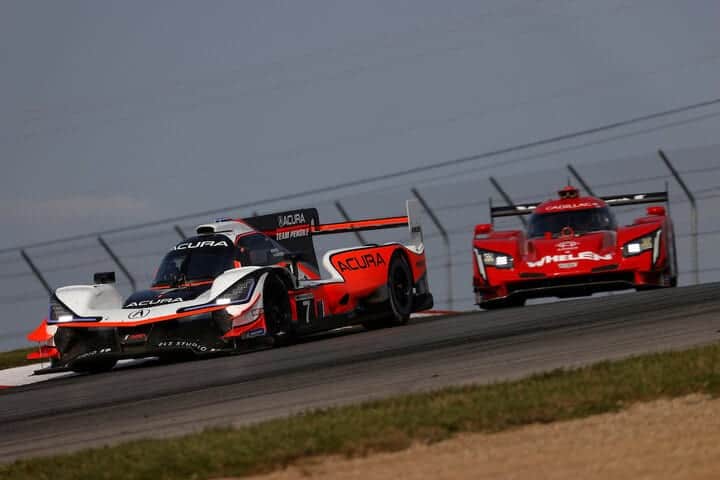 The IMSA WeatherTech SportsCar Championship travels to Mid-Ohio Sports Car Course this weekend for the first sprint race of the season.  27 cars are currently entered in three classes.  The LMP2 and GT Le Mans classes are not scheduled to race this weekend.  Both classes’ next points race will be the Sahlen’s Six Hours at the Glen on June 26.  The GT Le Mans class was added to the Detroit weekend, but that will be a non-points event.

In the DPi class, there are six teams entered.  Action Express Racing’s second car (No. 48) is not entered and is unlikely to return until Watkins Glen next month.  Otherwise, there are no major changes of note.  There will be three Cadillac DPi-V.Rs, two Acura ARX-05 chassis and the one Mazda doing battle on Sunday.

In the LMP3 class, there are seven teams entered.  The biggest change is the new entry for Andretti Autosport with Jarett Andretti and Oliver Askew at the wheel that was announced last week.  This team will compete in the remainder of the LMP3 events in 2021.

At Forty7 Motorsports, they currently have an unofficial lineup.  Austin McCusker, who drove for the team in Sebring back in March, is entered.  His teammate for the weekend has not been announced as of yet.  The remaining entries from Riley Motorsports, Performance Tech Motorsports, Sean Creech Motorsport and CORE autosport are unchanged.

The GT Daytona class starts off the WeatherTech Sprint Cup, a championship within the championship for sprint races, this weekend in Mid-Ohio.  There are 14 teams entered for this weekend’s action.

Team Hardpoint/EBM has been forced to temporarily scale back to one Porsche 911 GT3 R for Mid-Ohio.  According to the team, “Stakeholders behind the all-female program have experienced a delay in finalizing the remaining full-season partner.”  As a result, the team chose to withdraw the No. 99 Porsche and move team co-owner Rob Ferriol into the No. 88 with Katherine Legge.  Sponsorship on the No. 88 will be provided by Richard Mille watches and GridRival.

Compass Racing is back with their new Acura NSX GT3 Evo for Mario Farnbacher and Jeff Kingsley.  It is the first time that the California-based operation has run a Honda product in the IMSA WeatherTech SportsCar Championship, although they have raced Civics in the former Street Tuner class of the Continental Tire SportsCar Challenge.

At Wright Motorsports, Ryan Hardwick is back to make his season debut in the No. 16 Porsche, replacing Trent Hindman.  Hardwick was supposed to be full-time this year, but suffered a concussion in a practice crash at Daytona back in January that forced him to sit out the Rolex 24 and Sebring.

Ross Gunn is in the No. 23 Aston Martin for The Heart of Racing this weekend and will be for the full season alongside Roman DeAngelis.  The original plan was for team principal Ian James to once again share the car with DeAngelis full-time, but he has chosen to curtail his IMSA driving to the four endurance races.  He is also sharing a Aston Martin Vantage GT4 in Pirelli GT4 America SprintX with Gray Newell.

Mid-Ohio will mark the WeatherTech SportsCar Championship debut for CarBahn Motorsports with Peregrine Racing.  The team has acquired an Audi R8 LMS GT3 for the WeatherTech Sprint Cup races.  2019 IMSA Michelin Pilot Challenge Grand Sport champion Jeff Westphal will be joined by Richard Heistand.  Gradient Racing also returns with their Acura for Till Bechtolsheimer and Marc Miller.  It is actually the third race of the year for the team as they were helping out SunEnergy1 Racing earlier in the year.

Finally, there are no driver changes of note at Paul Miller Racing.  However the team has chosen to stick with the No. 1 on their Lamborghini this weekend.  This goes against the original plan, which was to share the No. 48 with Action Express Racing.

Coverage of the Acura Sports Car Challenge Presented by the TLX Type S will air live on NBCSN at 2:30 p.m. ET Sunday afternoon.