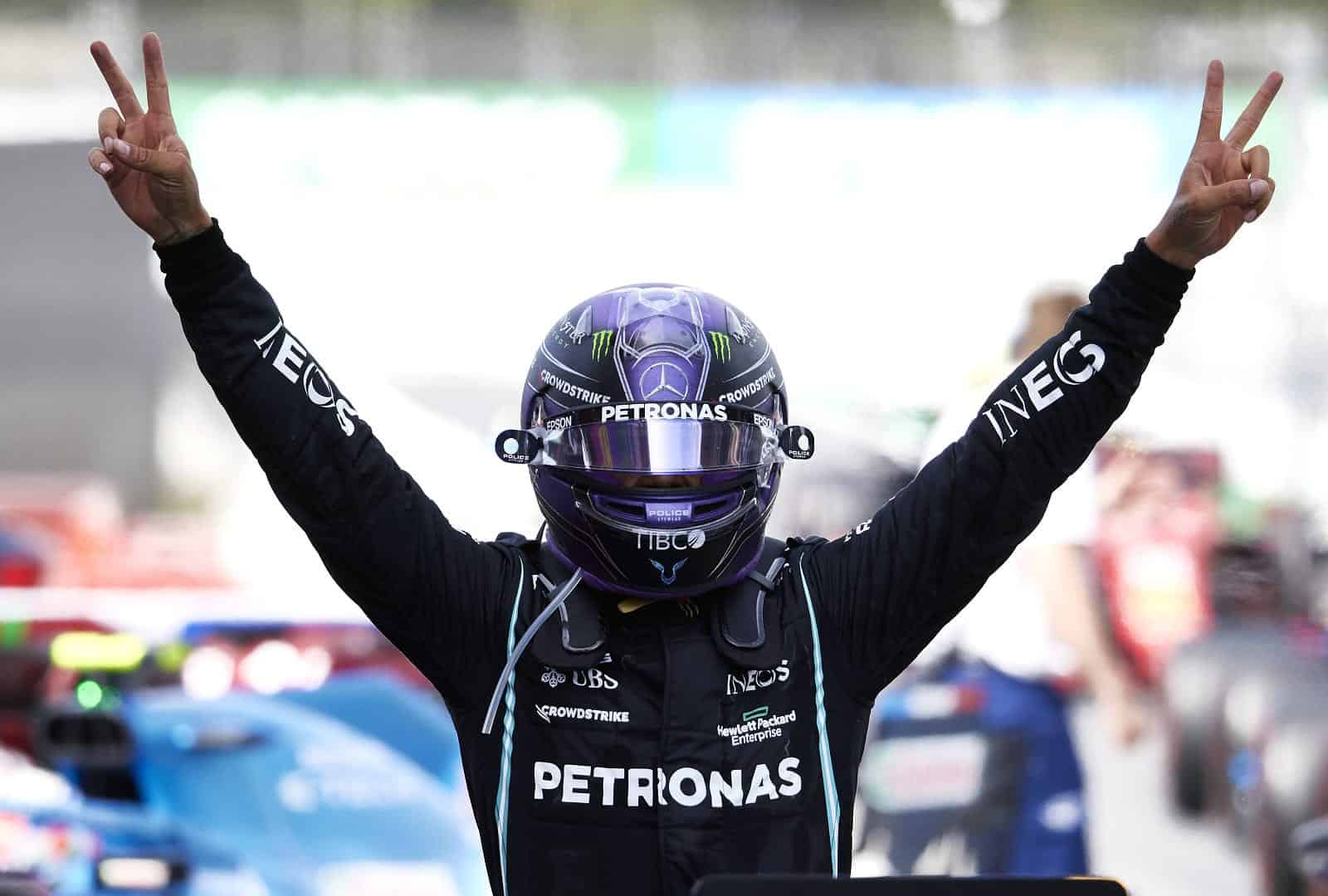 The start of the Spanish Grand Prix portended Max Verstappen might equal Lewis Hamilton’s tally for Formula 1 race wins in 2021.  Verstappen powered by pole-sitter Hamilton into turn 1 and then pushed out to nearly a two-second lead.

The power failure to Yuki Tsunoda’s Alpha Tauri brought out a safety car that looked like it would close the gap and allow for an easy pass.  Yet, no, Verstappen managed to hold steady at the front, and even when Hamilton closed in and brought the gap to under a second, Verstappen remained at the front.

The thing with Hamilton and Mercedes is that together they consider all possibilities and often select a differing strategy.  And when Hamilton pitted for scuffed medium tyres on lap 43, they chose to challenge the prevailing idea of a two-stop race and switched to three-stop.  Red Bull failed to cover, and it was all Hamilton needed to secure his third win of the season, sixth Spanish GP, and extend his gap in the championship standings (94-80).

Such a win is exactly what Mercedes has been doing for the past eight years.  If it does not beat the field with outright speed, the team makes the calls needed to position its drivers for the win, and then, frequently, Hamilton makes everything come together.

The 14-point gap is not insurmountable for Verstappen, but the more that it grows, from eight after the last race, the more difficult it will be to overcome.  Call it death by a thousand second-place finishes.

Fastest on track and a superb strategy lead to win number three out of the first four races. Incredible job from everyone at @mercedesamgf1. ???#WeLivePerformance #MercedesAMGF1 #F1 #SpanishGP pic.twitter.com/viOBevr1dF

– Daniel Ricciardo finally shining.  Several drivers changed teams in the offseason, but while Sergio Perez and Carlos Sainz have both performed well for Red Bull and Ferrari, respectively, but Ricciardo has seemed out of sorts.  This weekend may be the harbinger for McLaren’s signing of the Aussie in the offseason.

His sixth-place finish, after starting a respectable seventh, concluded his best weekend of the year.  McLaren looks like it will be battling Ferrari for third-best team all year long and the team needs Ricciardo to provide equal performance to teammate Lando Norris.

– Mercedes knows what it is doing.  The mind-meld between Hamilton and Mercedes is really where they beat everyone else.  The two seem to enjoy ability and understanding to perform exceptionally but also to re-think what they are doing at all times.

The decision to have Hamilton run on a three-stop strategy, even if predetermined, illustrates that they knew what they needed to win before the lights went out.  At the proverbial heart of the matter is that they know how to win and investigate every aspect to pull it off.

– Red Bull with a terrible pitstop for Verstappen.  If anything signifies how close the battles are for positions, Red Bull’s unusually slow stop provides the example.  The Milton Keynes team seems to pull off ridiculously fast stops at will, hovering around the 2.0-second range.  (Of course, everyone else is agonizingly slow with stops in the 2.5 – 2.7 range.)

However, when Verstappen came in to switch from soft to mediums, Red Bull ‘botched’ the stop by taking a horrific 4.2 seconds.  Ye Gods!  While the two-second deficit did not throw away the race, giving away such a gap gave an overall assist in Hamilton’s ability to hunt down and overtake Verstappen for the lead in the late stage of the race.

– This season is not going well for Alpha Tauri.  Last year, the team was a bit of a darling, especially with Pierre Gasly’s surprising win at the Italian GP (Monza).  Even Daniil Kvyat performed decently in the second half of 2020.

Gasly scoring tenth at Barcelona looks more like fortune than from performance.  That he started the race by lining up improperly and overcame a five-second penalty is solid.  That he made such a mistake is a question mark as to what is happening with the team and the performance as his teammate Tsunoda appears to be struggling and retired with when his car shut down.

– Having a wealthy father can be a godsend.  In America, it can lead to being an owner of a sports team or becoming president.  In Russia, it can lead to taking a seat in an underwhelming F1 car and the ability to showcase that you do not belong on the track.

Nikita Mazepin has become the joke of the F1 grid.  Last week, at the Portuguese GP, fans made a concerted effort to award Mazepin the Driver of the Day award in humorous irony.  Taking the track on Friday for FP1, Mazepin continued his lackluster exhibition of driving by spinning early into practice – meaning that he has spun on every track that F1 has visited this season.  At this point, the sportsbooks have to be laying odds on how early he spins on a race weekend.

– If any team gets the award for WTH, it has to be Alpine.  With six laps to go, Fernando Alonso held the tenth spot and was set to collect another point.  Then Lance Stroll came out of the pits and unsafely joined the track forcing Alonso off and into 11th.  Then came the freefall.

The team had hoped, apparently, that Alonso could hold onto his position with worn tyres, even as everyone else had come in, and the strategy backfired.  Alonso may be a massive talent, but Alpine cannot afford to squander his time in the seat or the potential for important constructor’s points.

– Hamilton offered a cryptic analysis of dealing with his adversary Verstappen, stating “It was actually a really good day, I learned a lot about Max today and perhaps more than all the other races probably put together.”

Hamilton, however, was coy in saying what he actually learned.

– Verstappen may have claimed the extra point for the fastest lap of the race but still felt dejected saying, “Too slow – that’s how you sum it up, there’s not much else to really discuss. I tried really everything to manage it as good as I could, looking after tyres and stuff, but it’s just not enough when behind you, they’re just pushing you and you see there’s clearly a bit more pace.

– Ricciardo enjoyed a two-spot jump at the start of the race and offered, “I had some good problems in terms of the start was good, and that got me in front of a couple of faster cars and therefore that meant I then had to defend pretty much the whole race.”

The Results – Spanish Grand Prix (May 9)