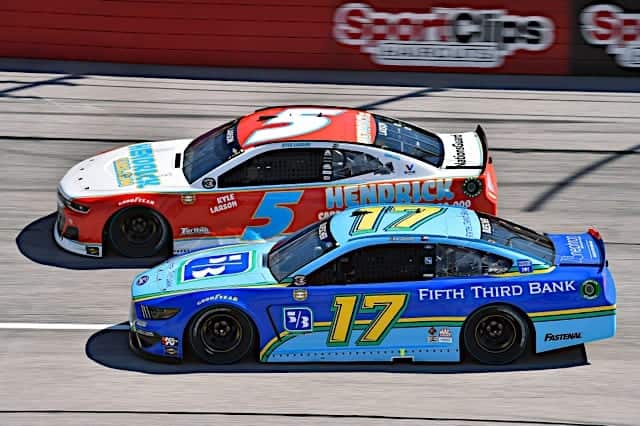 Who… should you be talking about after the Goodyear 400?

Martin Truex Jr. dominated Sunday (May 9), leading 248 of 293 laps at Darlington Raceway on the way to his 30th career victory. Truex becomes the 28th driver in NASCAR history to win 30 or more races and sits sixth among active drivers in career wins.

Truex and his No. 19 team thrive on the 750-horsepower package, earning three wins this year. Through a dozen 2021 races, he’s the only driver to have more than one trip to victory lane on his resume. Truex is making a case for himself as an early favorite to take his second Cup title as well.

There was a lot of talk about the usual suspects on Sunday.  Joe Gibbs Racing posted three drivers in the top 10, including Truex. Three more of those spots went to a resurgent Hendrick Motorsports.

But what other team put multiple drivers in the top 10? Not Team Penske or Stewart-Haas Racing, who had one top 10 apiece. No, it was Roush Fenway Racing, with Chris Buescher finishing ninth and Ryan Newman surging to 10th, the first car one lap off the pace.

While that’s far from a return to the dominance RFR once showed, right along with those top teams, there are signs they’re headed in the right direction. Buescher is 15th in driver points, in line for a playoff berth, and is beginning to show consistency. It’s easy to forget he’s a NASCAR Xfinity Series champion and, at age 28, is just entering the prime of his career.

Newman is in the twilight of his, but he provides RFR with veteran feedback and the kind of never-move-over attitude that will grab him some good finishes and TV airtime, too.

NASCAR returned to Darlington for a scheduled second race for the first time since 2004, moving its annual throwback theme to the spring race as well. Throwback weekend generates plenty of talk leading into the festivities, teams revealing their paint schemes with plenty of fanfare.

That’s great for the sport. Anytime people are talking NASCAR, it’s good, but this weekend has a great atmosphere surrounding it. The Lady in Black belongs on the schedule twice a year, if for nothing more than how difficult she is to race with. No matter the handling package, drivers and teams have to work hard, strategizing for every finishing position while both races now have a special allure attached to them. September’s Southern 500 has always had its own special connection to the sport as Labor Day Weekend’s crown jewel event.

This weekend, this track represents what’s still right in NASCAR.

Where… did the other key players wind up after the Goodyear 400?

Polesitter Brad Keselowski was an example of what happens when a team misses the setup at Darlington. Keselowski struggled almost from the start, but a flat tire in stage two after a brush with the wall really took any wind out of the No. 2’s sails. Keselowski finished 24th, three laps behind Truex at the end of the day.

2020 Darlington winners Kevin Harvick and Denny Hamlin had good days, finishing eighth and seventh, respectively. However, neither driver found the magic they had with the Lady in Black in 2020. Harvick led early but wasn’t able to keep up with the track as well as he’d have liked, dropping into the teens mid-race before rallying a bit at the finish. Hamlin likewise had speed early but, while he hung closer to the front than Harvick, another opportunity for a win slipped away.

Last week’s winner Kyle Busch took a wild ride in stage one when a tire went down on his No. 18 Toyota. Busch brushed the wall yet escaped heavy damage, giving him a chance to work back up through the field. By the time it got down to racing for the win, Busch was right in the thick of things, finishing third.

Kyle Larson didn’t make anything easy for Truex. Larson closed on Truex after the final round of pit stops, getting to the bumper of the No. 19 a few times before falling back in the final laps after having used up his equipment.

Lapped traffic played a major role in Truex’s victory; each time Larson charged, a lapped car slowed his momentum. It could have worked either way in this scenario. Truex could just as easily have been impeded, particularly by drivers racing for position, depending on the choices made by those drivers.

Larson pulled off a thrilling three-wide move on Ryan Newman, who’s notoriously hard to pass whether he’s on the lead lap or not, and Tyler Reddick as the pair fought for position. Truex had already cleared them and Larson knew he had one shot to get around if he was going to make a run for the win. Larson split the two, threading between them in a space just wide enough for his car while making the risky move work.

He might not have run down Truex, but it was a statement move by Larson nonetheless.

The Cup Series heads to Dover this weekend with four drivers tied for the active win lead there at three apiece. It’ll be Truex, who considers Dover his home track, Harvick, Kyle Busch and Newman fighting to be king of the Monster Mile. It’s a position vacated by Jimmie Johnson, whose 11 Dover wins set the bar for all-time victories at the one-mile oval.

Five others have one win at the Monster Mile. But among those without a Dover trophy are some heavy hitters: Joey Logano, Ryan Blaney and Alex Bowman. Christopher Bell is also one to watch with a pair of NASCAR Xfinity Series wins.

Will an heir apparent to Johnson appear on Sunday, or will we have a surprise when it’s all said and done?

How… many more drivers are going to win this summer?

Next week’s race at Dover marks the halfway point of the Cup Series regular season, and the first 12 races have featured 10 different winners. But do winning drivers really have to worry about missing the playoffs?

The list of drivers without wins who are probably going to grab one is dwindling. Hamlin has been too strong, with nine top fives in 12 races, to think he won’t win at least one. Chase Elliott and Harvick have struggled a bit this year, but their recent track records make it hard to believe they won’t get at least one.

Buescher is a dark horse to take one before summer is out. And, of course, the cutoff race is at Daytona International Speedway, so just about anyone could steal a win there.

But it would take all of those names emerging victorious (or someone else really stepping up their game) and a wild card at Daytona to oust a race winner from the playoffs.

It could happen but at this point? It probably won’t.

i like the throw back paint schemes….however the tv people, they need to stop visiting the way back machine. i was so disappointed to see michael waltrip doing grid walk again. doesn’t he realize no one really wants to talk to him?

onto dover and the concrete monster. hopefully old mother nature will cooperate.

I just have nothing to say to a negative remark. Mikey is a stalwart of NASCAR since the late 80s. The gridwalk is funny–who wants to stare at their cellphones all day and not laugh? Larson was 2.4 seconds back at the end and Busch was 9 something. That is not the “thick of things” as the writer mentioned. The gridwalk highlights the personalities in NASCAR and I love it. These are not the days of Benny Parsons and Ned Jarrett anymore. What I get sick of are fair-weather fans. If you don’t like the sport, go watch baseball but leave the negative comments at home; all it does it damage fan interpretation of racing; kinda like Talledaga Nights reinforced the redneck image that just isn’t really there. There are less Southern drivers than ever before. My advice is to start WATCHING the racing instead of criticizing it. I imagine you are someone that wants 300 mile races when NASCAR racing is supposed to test endurance and mechanical wherewithal.

Yes, no negative comments allowed on a public message board – good luck with that! I do agree with you that the gridwalk is funny – as in funny how much all the drivers hate it (anyone want to drop a box of tacos on my car please?). And while I’m not going to defend someone else, I’d bet Janice has been a stock-car/NASCAR fan longer than 90% of the posters on here. She is the antithesis of “fair-weather”. See Josh, the few posters on here represent the few remaining fans. We’d all like to watch a race rather than a series of gimmicks created to enhance a “product”. And you bet we’d like to see races also test the mechanical endurance of the vehicles (hey – instead lets turn on the no-damage setting on the vid game). By the way, how is the burger in the NASCAR corporate office cafe? (Just kidding of course)

when michael waltrip started grid walk years ago is was good. I enjoyed it. but now even the drivers turn tail and run the opposite direction when he comes calling. his joke yesterday was his driver’s suit was too small for him. he has become a laughing stock. remember when he was on dancing with the stars? in my OPINION michael was a stalwart in a nascar cause of his winless streak, until he won the Daytona 500 in 2000. he has also been involved with controversies through his career as a team owner. jet fuel for daytona 500 qualifying.

i thought it interesting when fox came back this season and covid prevented people from being at the track, and they did a grid walk with a cut out of michael waltrip. drivers would talk to the camera guy and sound guy. let’s see……what was missing?

i’ve been to many races and watched many races over the weekends since the mid 70’s. i use to drive 50 miles a week to get the old “Winston Cup Scene” newspaper that . i’ve mourned quite a few drivers, owners and team members that have passed.

oh and just to poke the snake…..i can’t believe dover race is starting at 3:30 pm on sunday.

100% agree with you Janice.
All year I have been praising FOX for getting rid of that buffoon and they bring him back on Sunday. What a let down. I immediately muted the TV when I saw that idiot on the screen.
What can you say to someone who isn’t willing to critique because that’s negative. Some of us don’t like being force to eat gruel, if you are happy to eat whatever shite they shove down your throat maybe you are the one with the problem.