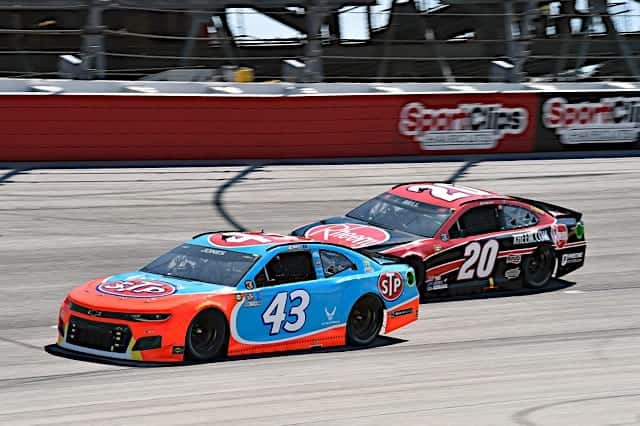 If you tuned into Sunday’s (May 9) Goodyear 400 at Darlington Raceway with no information on NASCAR Throwback weekend, you may have wondered why there were schemes largely from the 20th century on track.

One of those cars would be the easily distinguishable STP colors adorning the No. 43. However, it was Erik Jones driving instead of the predecessor John Andretti, who passed away last January from colon cancer complications. Andretti drove Richard Petty’s famous No. 43 STP during the 1999 season, in which he won his second and final career Cup race at Martinsville Speedway. Jones carried the scheme at the iconic Darlington venue, the same track where he also earned a second career win, that one coming in the 2019 Southern 500.

Jones quickly entered the top 20 at the beginning of the race, where he would spend the large majority of his day. The No. 43 experienced some loose-handling chassis conditions throughout stage one, but Jones fought his way to 15th by the time the green-white stage checkered flew.

The Byron, Mich. native got as high as 13th near the start of stage two before some contact from Kyle Larson cost him some momentum. Jones made a great save to hang on to 16th, continuing to fight a loose car as he ranged from 13th-16th throughout the stage. He ultimately concluded stage two in 16th.

In the final stage, Jones drove his STP Chevrolet as high as 11th. He sat comfortably in the top 15 when his day was nearly derailed. Jones cut a tire during a long green-flag run, forcing him to pit road. However, due to the fact many cars were two laps down, Jones only fell to 20th place. The No. 43 fought for the rest of the day to claw back up to 18th, Jones’s first top 20 since Richmond and best finish since a ninth at the Bristol Dirt race in March.

“We did not get the finish we wanted today with our Richard Petty Motorsports No. 43 STP Camaro ZL1 1LE,” Jones said following the race. “It was pretty decent. We had a good run early and lost the balance a little bit late, and then cut a tire and got in the fence. We came back and salvaged a decent day, so I am happy with that. It was the best run we have had in a few weeks, and it is something to build off of when we come back in the fall. Overall, a decent day, but we can do a little bit better.”

While the finish may not be what the No. 43 team had deserved, it was an otherwise successful week for Richard Petty Motorsports and Jones. He survived late chaos in Wednesday night’s iRacing Pro Invitational event to win at virtual Darlington. Additionally, the RPM design team knocked it out of the park with Andretti’s tribute, earning them the honors of best in show for the annual throwback weekend.

Perhaps the most intriguing aspect of throwback weekend is to see which famous Hall of Fame drivers and teams modern day organizations will try to replicate. For 1999 NASCAR Cup Series champion Dale Jarrett, he got two nods this weekend. Both were featured in Saturday’s NASCAR Xfinity Series race with Brandon Brown and Jeremy Clements throwing back to his schemes. Brown had some issues throughout the race but Clements had a day to remember, earning his first top-five result of 2021.

Clements had a rollercoaster first two stages, ranging from 11th-to-20th place. He was unable to score points in either stage but made up for it in a big way late. The No. 51 team took major swings at adjustments throughout the day, allowing Clements to hit his stride in the final stage. The Spartanburg, S.C. native stayed consistently inside the top 10 and 15, gaining speed as the race wore on. With a flurry of cautions in the closing laps, Clements was able to take advantage and gain spots on restarts. When the checkered flag waved for the conclusion of the race, Clements came across the start/finish line in sixth. A disqualification to Noah Gragson’s No. 9 JR Motorsports Chevrolet allowed Clements to advance one spot to fifth.

The result marks Clements’ first top five since a third-place showing at Pocono Raceway last June. He is two top-10 finishes away from exceeding his career high of five and also two top-five results away from another career high. Clements now sits ninth in the standings with a 12.6 average finish, four spots better than his current career-best average of 16.9. The family-owned team sits above heavy series hitters such as JRM’s Gragson and Michael Annett plus Stewart-Haas Racing’s Riley Herbst after nine races.

While Jones carried the torch for Cup Series underdogs, Corey LaJoie deserves a shout-out for his run. He finished 22nd in a fantastic Alan Kulwicki Zerex tribute car, painted as almost an exact replica of the No. 7. While it may not seem like much, top-25 results are stepping stones for a growing team such as Spire Motorsports, and the finish was Lajoie’s third top 25 in four races.

The NASCAR Xfinity Series rocked the throwback grooves this weekend as well at Darlington. Alex Labbe earned his first top 10 of the season with a ninth-place result in a Kenny Wallace throwback. Landon Cassill also earned a season-best finish for JD Motorsports with a solid 11th-place showing. Tommy Joe Martins capitalized on a solid day with a 14th-place finish. Ryan Ellis made his series debut for BJ McLeod Motorsports. He made good use of it with a 15th-place result coming in his first series start since 2019.

The NASCAR Camping World Truck Series got on the road again at Darlington Raceway, too. Timmy Hill earned his second top 10 in four series starts with a seventh-place finish in a family-owned No. 56 Chevrolet. Jordan Anderson muscled his way to a 10th-place showing for his second top 10 of 2021, the first ever for him at a track other than Daytona International Speedway or Talladega Superspeedway.

Finally, a special shout-out is reserved for Erik Darnell, a perfect throwback return for a driver I grew up watching in Trucks. It was his first series start since 2008, appearing for Niece Motorsports in the No. 45 Chevrolet recently vacated by Brett Moffitt. Darnell posted a solid showing, running 17th as he looks to potentially make a larger comeback within the series.

It is a groovy time in the NASCAR schedule as the month of May features many changes. In the next two weeks, we shift from the flashback traditions of Darlington to the Monster Mile at Dover International Speedway. Then, it’s the much-anticipated debut of Circuit of the Americas down in Austin, Texas.

Looking ahead to Dover, the venue shows promise for drivers such as Jones and Trackhouse Racing’s Daniel Suarez. Jones won a NASCAR Xfinity race at Dover while Suarez has 4 Cup top 10s at the Monster Mile in eight career starts.

Down in NXS, look for Clements to continue a string of recent momentum. His Dover stats are not eye-popping, but the underdog did finish 13th here this past August and only has two finishes outside of the top 15 in 2021.

A belated Happy Mother’s Day to all the mothers out there!

Unfortunately was added to the long list of @Joegrafjr victims on lap 4 at @TooToughToTame today. Was a shame to not get to see how this awesome throwback scheme for @team_shr26 could have run. Thanks to Sam and the team, we'll move on to Charlotte!#Nascar #Xfinity #TRD pic.twitter.com/WaatOdHczW

R u sure Bob? https://t.co/V1RNGnvWuZ

We came dressed nice to play with The Lady in Black yesterday. She tried to bite us, but we bit back harder.

P15 in the race, P15 in driver points, and P18 in owners points. pic.twitter.com/QPXJBgJZaK

I wanna do this more.

Gonna continue to do all I can to fight for more opportunities.

Top 10 at Darlington!!!!! My home track! I would’ve never thought as a kid coming here with my dad that this could be possible.

Never give up… God is good! ?? pic.twitter.com/Av0oysBOq6

I was at the Martinsville race that John Andretti won. Was nice to see him remembered.

It is cool when the original sponsor adorns the throwsbacks like the Zerex car and the Andretti throwback. Chase E’s car looked awesome too and of course, I loved the Harvick remembrance car.