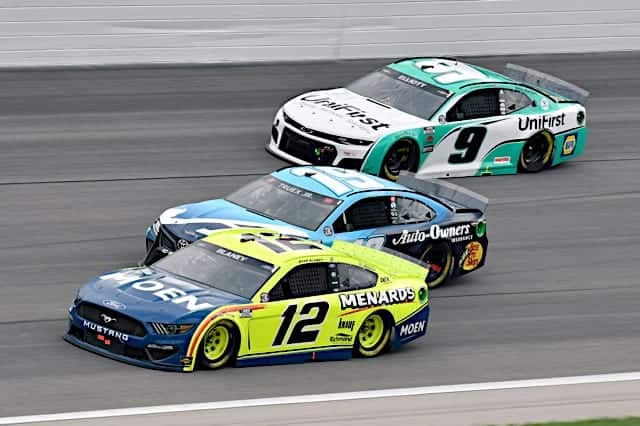 1: NASCAR manufacturer parity … At the top

12 races into the 2021 NASCAR Cup Series season, it’s clear three organizations have separated from the rest of the pack. Joe Gibbs Racing (with Darlington Raceway winner Martin Truex Jr.), Team Penske and Hendrick Motorsports are the sport’s new Big 3, sweeping 10 of the top 11 spots in the current point standings. Alex Bowman (Hendrick, 14th) is the lone outlier within those teams, and even he has all-but-clinched a playoff berth with a win last month at Richmond Raceway. The driver taking Bowman’s place inside that top 11 in points? Kevin Harvick from Stewart-Haas Racing (seventh).

The distance between that group and the rest of the pack is more than Michael McDowell’s Cinderella Daytona 500 victory makes it seem. But what’s interesting about the country club at the top is they’re evenly divided by manufacturer: Penske’s three Fords, Hendrick’s four Chevrolets and JGR’s four Toyotas have any one of the sport’s OEMs in position to win each week.

That’s resulted in the closest manufacturer race we’ve seen in some time. Ford holds a one-point lead over Chevy while Toyota sits just six points back despite having the most wins (five) among the trio. Three times this year, we’ve seen a 1-2-3 split among the OEMs on the podium, while just once (Talladega Superspeedway) has any of the three manufacturers been shut outside the top six.

That type of parity is impressive for the sport, keeping all makes heavily invested as we move to the NextGen car in 2022. But there’s also a hierarchy developing here, even within the Ford camp where Penske and SHR have pushed each other for so long. The quality and depth of Penske’s roster makes it difficult to see anyone unseating them atop the Blue Oval camp in the short term. Roush Fenway Racing and Front Row Motorsports don’t have the finances or the firepower; the single-car Wood Brothers Racing program is basically a Penske satellite team.

At Chevy and Toyota, those hierarchies are even clearer. Chip Ganassi Racing and JTG Daugherty Racing are aligned with Hendrick, running as virtual second-tier programs. Richard Childress Racing supports the rest of the playoff-contending cars, but they’ve led only 17 laps this season themselves while satellite, single-car programs like Richard Petty Motorsports and Trackhouse Racing sit outside playoff position.

Toyota, of course, has just five teams: JGR and the one-car 23XI Racing program that’s struggled in its first year with driver Bubba Wallace. Over time, 23XI will hopefully expand with co-owner Michael Jordan, but the manufacturer has chosen quality over quantity at the sport’s top level for years.

How is that hierarchy going to budge, creating more parity that keeps fans engaged like we see in the NFL almost every year? Simple: adding a new OEM into the fold. No less than NASCAR President Steve Phelps admitted that during the introduction of the sport’s NextGen chassis last week.

“Would it be nice to have another [OEM]? Yeah, it would be nice,” Phelps said. “It would help in a number of different areas, not just competing with the other three OEMs, but also provide additional support to the garage, which is important. The dollars only go so far, and you get kind of the mid to the back pack of the garage [who] don’t get a ton of additional support from our OEMs.”

That trickle-down funding seems clear the way the competition this season is shaking out. So can NASCAR use the parity up top to convince someone, anyone there’s a place for their cars on the grid to compete by 2023? Notably, not a single new NASCAR owner in any of the sport’s top three series would make the postseason if the year ended today. Which side of the coin will manufacturers like Dodge or Nissan see if they’re taking a closer look?

Truex dominated Darlington, there’s no two ways about it (248 of 293 laps led). But the more impressive stat is the way Truex has stepped up so far this season after being a notoriously slow starter throughout his career.

It’s the first time ever the 30-time race winner has collected three victories in the first 12 races. Sitting second in the standings, it’s just the third time in his career he’s been inside the top five at this point in the year.

The other two seasons? 2015, the year Truex made his first Championship 4, and 2o17, both with Furniture Row Racing. He went on to win the title the second time, posting an eight-win year with the same type of low-downforce, high-horsepower package that’s earned him three trophies thus far. As the Phoenix Raceway winner this spring, the No. 19 team has to be feeling pretty good about their chances.

The past month has been marked by some bizarre strategies employed by Cup Series crew chiefs. Brad Keselowski chose to stay out on old tires at Richmond, one less pit stop that took him from the lead to getting lapped. Head wrench Phil Surgen did the same with Ross Chastain at Darlington this past weekend, taking a top-10 run and torpedoing it for reasons unknown. We also saw some weird decisions on when to pit at Talladega Superspeedway, similar to the Daytona 500 when Denny Hamlin saw his chances for victory go poof because of when Toyota made their final stops.

I understand the pressure on the pit box these days to gain track position any way you can. But there is such a thing as overthinking it. Darlington is a great example; the second someone pitted, with this low-downforce package they were two seconds faster than you on tires. Kyle Larson snuck in just two laps before Truex on his final stop and cut his seven-second deficit in half.

If I were crew chiefing that race, I’d bring my car in the second another lead-lap car pitted; there was just too much to lose, especially as the day developed a green-flag feel. Sometimes, staying the course and earning that top-10 finish provides you more momentum than hitting on 17 at the blackjack table … and going broke.

We’re hitting the halfway point in the regular season this week, and the playoff picture is starting to clear up. Right now, based on past history, 10 winners have already clinched their spots.

That leaves six spots remaining. Three of them are currently occupied by winless drivers well over 100 points above the cutline: point leader Denny Hamlin, Kevin Harvick and reigning champion Chase Elliott. With four Daytona 500s and two series titles among them, it’s hard to see anyone in this trio falling out.

That leaves three spots available for the rest of the field, currently occupied by RCR’s Austin Dillon, RFR’s Chris Buescher and Matt DiBenedetto of the Wood Brothers. But Tyler Reddick is tied with Matty D for that final spot, and there are another seven drivers within 59 points, from Wallace and Daniel Suarez driving for new teams, to playoff veterans like Kurt Busch and Ryan Newman, both of whom may be in their final full-time season of competition. (Of note: Ryan Preece remains in that mix. Will that be close enough for JTG to run him a full 26 regular season races without more sponsorship?)

That should make this battle the best in several years with a system that’s often lacked drama in the final races of the regular season. Notably absent among that group are two SHR drivers who made the playoffs last year: Aric Almirola and Cole Custer. The path to over 16 winners seems to now rely on whether this duo can find a way to turn their disastrous seasons around (both DNF’d with hard crashes at Darlington).

A nightmare season for Gragson continued at Darlington, as his No. 9 NASCAR Xfinity Series Chevrolet was disqualified after a fourth-place finish, costing him $100,000 in the Dash4Cash program. According to NASCAR officials, the team violated Rule 20.14.c in the rulebook, stating “All suspension mounts and mounting hardware must not allow movement or realignment of any suspension and/or drivetrain component beyond normal rotation or suspension and/or drivetrain travel.”

Initially, owner Dale Earnhardt Jr. seemed content to accept the penalty and move on, retweeting a statement from 2018 when Justin Allgaier got hit with a rule book violation while driving for JRM.

I want our teams to always be aggressive with the rule book and I always want @Nascar to be extremely strict in enforcing it. Sometimes those lines are gonna cross. Shake it off and get ready for the next one. https://t.co/hKsq9I8n8v

However, on Monday (May 10) there JRM was, officially appealing the ruling which seemed to contradict Earnhardt’s push to “shake it off.” Certainly, I’m sure the $100,000 bonus had something to do with it, but there’s another pesky reason that keeps sticking around.

Gragson, driving for one of the best NXS teams, is in serious jeopardy of missing the playoffs.

That DNQ leaves him 11th in the standings nine races in, eight points ahead of 13th-place Brandon Brown on the cutline. There’s a well-funded driver in Riley Herbst sitting 14th, suffering a similar slow start as Gragson and with the equipment to make up the deficit. You also can’t count out Ryan Sieg, last year’s playoff Cinderella, who has stumbled his way to 17th in the standings. He’s unlikely to pass by Gragson on points but is good enough to steal a win if the cards fall his way.

Bottom line, it’s too close for comfort at this stage of the game, with Gragson continuing to suffer bad luck. JRM’s No. 9 team is going to have to fight for all the points they can get, even if it means staging a losing battle all the way through NASCAR’s appeals system.