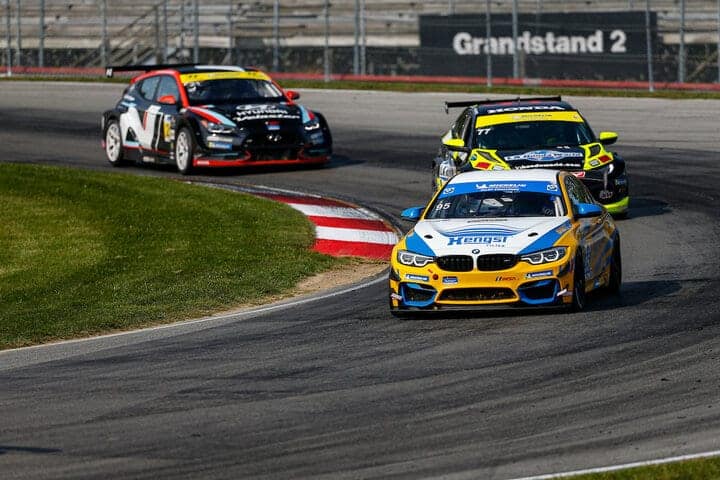 IMSA Michelin Pilot Challenge teams will return to action Saturday (May 15) for the first time in nearly two months at Mid-Ohio Sports Car Course.  There are currently 36 teams entered for the Mid-Ohio 120.

The Grand Sport class has 21 entries, an increase of one from Sebring.  Despite the increase, there are three teams that are not entered that competed at Sebring.  One is Stephen Cameron Racing’s BMW for Sean Quinlan and Greg Liefooghe.  This team primarily competes in SRO America competition.  Automatic Racing is not entered with their Aston Martin, as is LAP Motorsports with their Mercedes.

However, the duo of Anton Dias Perera and Scott Andrews that drove the LAP Motorsports Mercedes at Sebring are entered in another car.  They will drive a second Toyota GR Supra GT4, No. 21, for Riley Motorsports as teammates to Alfredo Najri and Javier Quiros.

A new team, American Wheelman, will be on the grid with a Ford Mustang GT4 shared by defending Grand Sport champion Nate Stacy and Jack Roush Jr.  Roush returns to the series for the first time since 2018, when he ran a part-time schedule for KohR Motorsports.

FCP Euro will also make their IMSA Michelin Pilot Challenge debut with Michael Hurczyn and Nate Vincent sharing a Mercedes-AMG GT4.  Both drivers previously raced Volkswagen GTI TCRs for the team in TC America’s TCR class.  The team chose to sit out the 2020 season due to COVID-19, then SRO America dropped TCR from TC America.

Like in the IMSA WeatherTech SportsCar Championship, Ryan Hardwick will be back to truly make his IMSA Michelin Pilot Challenge debut this weekend for Wright Motorsports.  It was in Wright Motorsports’ Porsche Cayman GT4 MR in Daytona that Hardwick crashed and was concussed.  The team was forced to withdraw from Daytona, but finished a strong second with Maxwell Root driving in Hardwick’s place alongside Jan Heylen.  Finally, HTP Winward Motorsport’s second car, the No. 57 Mercedes for Bryce Ward and Alec Udell, returns to the fold after sitting out Sebring.

In the TCR class, there are 15 teams entered.  There is only one change of note in the class.  Greg Strelzoff is not listed as driving the No. 94 Honda Civic Type-R TCR alongside Ryan Eversley.  Instead, his place will be taken by Scott Smithson, who will be making his IMSA Michelin Pilot Challenge debut.  Smithson raced in five of the six TC America race weekends last year for DXDT Racing in the now-defunct TCR class.  There, Smithson claimed three victories (two at Road America and one at Circuit of the Americas) and finished third in TCR points despite missing four races.

The Mid-Ohio 120 is scheduled to go green at 3:35 p.m. ET Saturday afternoon.  It will be streamed live on NBC Sports’ TrackPass service.  A tape-delayed broadcast of the race is scheduled to air May 25 on NBCSN at 4 p.m.