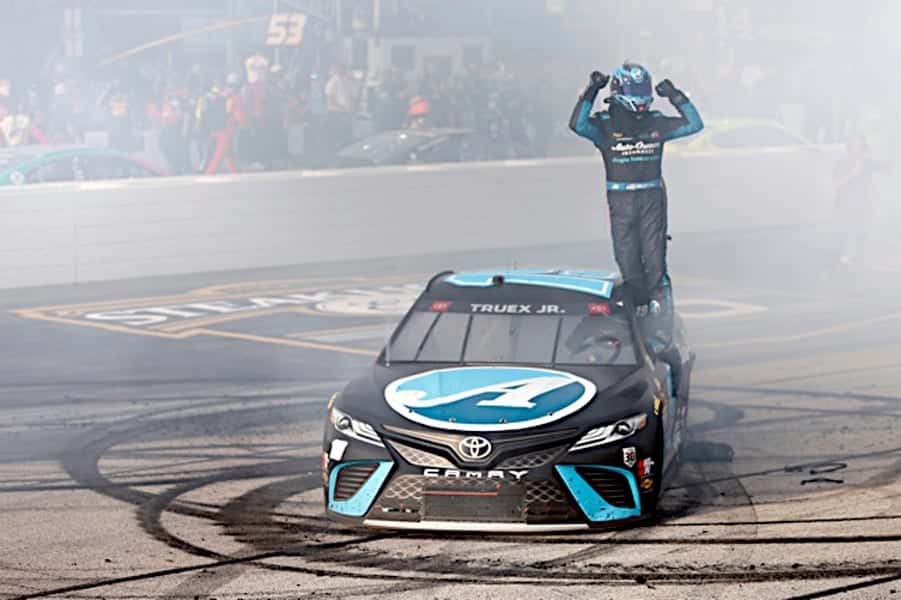 While some drivers want to get away from Darlington faster than getting out of Society Hill after a speeding ticket, other drivers are glad they visited for Throwback Weekend. But the stats and radar gun do not lie: Martin Truex Jr. dominated the race at Darlington Raceway while becoming the first driver to reach three wins this season.

By the 12th race of 2020, Denny Hamlin became the first driver to win three races. In the last 10 seasons, the first driver to three wins has won the championship three time: Jimmie Johnson in 2010, Brad Keselowski in 2012 and Kyle Busch in 2019. While this stat is not a precursor to being a champion, especially with the points format, it can show who you have to hurdle over to win the championship, and Truex is becoming the driver to beat.

The percentage of laps that Truex led in the race at Darlington. During Throwback Weekend, Truex threw it back to the days of Furniture Row Racing with a black paint scheme and commanded the field as the No. 78 car did in 2016 and 2017. Truex’s percentage of laps led at Darlington trails only his 2016 Coca-Cola 600 win, where he led 98% of the laps, and at Martinsville in 2019, where he led 92.8%.

William Byron continues to grow his top 10 streak this season. This record ties the mark that was seen last season by Kevin Harvick with a top 10 in ten straight races. Harvick started his streak in 2020 at Talladega and ended his streak after the doubleheader at Michigan with a win. In those races, Harvick led a total of 364 laps. Byron has had a quieter streak going on in 2021. He has led a total of 148 laps and did not even lead a lap in half of the races in his current streak. The No. 24 team has improved leaps and bounds after scoring 14 top-10 finishes last season.

Aric Almirola has earned four DNFs for crashes so far this season. With a wreck coming off of turn 2 on lap five, Almirola finished last and found himself farther back from the playoff picture. Almirola is 100 points behind the cutoff spot held by Matt DiBenedetto and Tyler Reddick, who are tied in points. Last season, Almirola had a nine-race top 10 streak of his own from Homestead to Loudon, and recorded only 3 DNFs for the entire season. Almirola is in must-win mode to get into the playoffs now.

The number of wins by a Toyota this season, though none are from Denny Hamlin. Hamlin captured seven of the nine wins that Toyota scored in 2020, yet 2021 has been a different story. Hamlin’s finishes have been consistently good, as he has finished outside the top 12 only once with a 32nd place finish at Talladega after being involved in a wreck. Even though Hamlin has led 849 laps since his last win, which was at the fall Talladega race in 2020, Hamlin has not found victory lane — but his teammates certainly have. Joe Gibbs Racing has scored more wins this season than last season with drivers not named Denny Hamlin. The No. 11 team tried strategy to win at Darlington by not pitting in the middle of the race and having a set of fresher tires at the end. Unfortunately, Hamlin’s strategy did not work, and he settled for a fifth-place finish.

That is the worst finishing position that a Dash 4 Cash winner has recorded since the reboot in 2017. No Dash 4 Cash winner ever won the money without scoring a top-10 finish, but that changed Saturday. A.J. Allmendinger took the $100K in winnings with a 12th-place finish as Noah Gragson was disqualified after failing post-race inspection. The Dash 4 Cash drivers, which included Jeb Burton and Austin Cindric, had decent runs ruined by bad pit strategy and late-race wrecks. Allmendinger is now eligible to win the Dash 4 Cash bonus at Dover as well.

The lead has changed 15 times in six of the last 12 races at Dover, averaging out to a lead change about every 25 laps. While the Monster Mile is hard to tame, six drivers in the last 12 Dover races have led over 200 laps. Like Richmond, a dominant driver can easily lead over half of the race, but that does not guarantee a win. The last time that there were more than 20 lead changes at Dover was at the spring race in 2013, with Tony Stewart winning the race after leading just three laps.