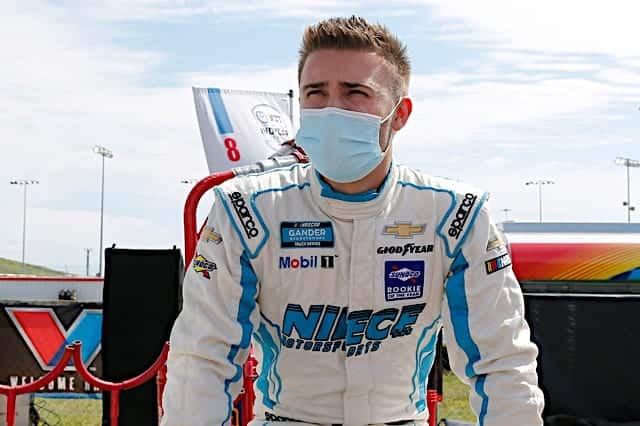 Ty Majeski is heading back to the NASCAR Camping World Truck Series for two races with ThorSport Racing, the team announced Tuesday (May 11).

The 26-year-old will hop behind the wheel of the No. 66 Toyota at Charlotte Motor Speedway on May 28 as well as at Nashville Superspeedway on June 18.

Majeski ran the first 15 races of the 2020 season with Niece Motorsports before a lack of sponsorship ousted him from the No. 45 truck, earning a career-best finish of eighth at Charlotte during that stint.

“Super excited about that and thank everyone at ThorSport and [team owners] Duke and Rhonda [Thorson] for giving me the opportunity,” Majeski said in a phone interview with Frontstretch. “With my season getting ended short last year with Niece, I got the opportunity to come and put the deal together over here for a few races, and hopefully build on it year to year and hopefully it turns into some bigger.”

Majeski said sponsorship for the ride would be announced at a later date.

The Seymour, Wis., native recently moved to Sandusky, Ohio, where he began working as an engineer for ThorSport in early March. Majeski still owns a home in Charlotte, but Duke Thorson is letting Majeski stay in a housing complex of his during the transition period.

As an engineer at the shop, Majeski is working with the team on simulations and being “hands on” in the shop, absorbing as much information as he can so he has a better understanding of the truck when he gets back behind the wheel.

“It’ll be a little bit different format. I’ll kind of be my engineer on my own truck, so to speak,” Majeski said. “And so I’ll be building sim models and running simulation and doing the simulator. It’ll be a cool story and something different and something I’m really looking forward to.”

The job is a perfect fit for Majeski when he’s not behind the wheel. He began attending the University of Wisconsin-Madison to become an engineer but chose to take a part-time ride in the NASCAR Xfinity Series with Roush Fenway Racing in 2018 for 12 races instead.

“I don’t have a degree, but I’m learning a lot from all the engineers here at ThorSport and they’re helping me build these models and understand everything,” Majeski said. “I’m able to take some of that knowledge that I gained running in the Truck Series last year and apply some of those things to these trucks here this year.

Two months into his new gig, Majeski says he’s very happy to work with ThorSport, the longest-tenured team in the series, and hopes to race for the program more than just the two races they have already announced.

But at 26 years old, Majeski’s career has had its fair share of ups and downs. He ran a handful of ARCA Menards Series races in both 2016 and 2017 before driving the No. 60 Ford for RFR in 2018, but Majeski suffered five DNFs due to crashes that year. In 2019, he made six ARCA starts and won three times while also competing in one Truck race before joining Niece for what wound up being 15 races in 2020.

The future for Majeski remains murky, but that’s OK for the career short-track racer who won the 2020 Snowball Derby in December.

“I never thought I would have ever made it this far in my career,” Majeski said. “Just really not having a lot of funding behind myself and being able to prove myself on a short-track level and get decent opportunities in the upper three series of NASCAR. I never thought it would have gotten to this point. In my eyes, I want a career racing, whether that’s in the Truck Series or Xfinity Series or the Cup Series. I’d be happy with any three of them.

“But for now, my sights are set on being here at ThorSport and finding a home here for the near and distant future.”

An additional plus to living in Ohio is being much closer to the Midwest, where he often races his super late model.

Fun race today in the #JoeShearClassic at @MISRacing. Never could get the balance where we wanted to all day. Fought hard ended p7.

Stay tuned to find out where my next race will be ?

In March, Majeski won the Rattler 250 at South Alabama Speedway for the fourth time in his career, something no other driver has done in 45 years of the event. Since then, he’s run two other races in the Midwest that haven’t gone the way he’d like. His schedule is sparse through the spring but he plans to get back onto the short tracks after his Truck outing at Nashville.

One of the key events will be the Slinger Nationals at Slinger Speedway on July 6, a highly coveted 200-lap event that Majeski has won twice – 2018 and 2020. This year’s race comes with higher stakes: a victory on July 6 locks the winner into the Superstar Racing Experience’s maiden appearance at the Wisconsin quarter-mile track on July 10.

Majeski was straight to the point: Plenty of effort will be put into this year’s Slinger Nationals.

“Obviously, for a guy like me trying to get his name out there and prove to people that I belong in NASCAR,” he said, “it’s a great opportunity for myself to go out there and win Slinger and hopefully get into SRX and put on a good show for all the fans. I’m definitely gonna be testing there and put some emphasis on that race. I know a lot of guys are gonna have that same mentality so it’s certainly going to be one heck of a show.”

Before that, though, Majeski will have two races back in the Truck Series. One of them – Charlotte – will allow practice and qualifying for the first time on an intermediate track since the COVID-19 pandemic derailed things in March 2020. That allows for even higher expectations heading into Memorial Day weekend.

“That’ll be beneficial for not only myself but the entire field,” Majeski said. “It’ll be good to get some practice and qualifying and hopefully give ourselves some good track position.”

Running a fifth truck for ThorSport comes with added responsibility for Majeski to bring the truck home cleanly, something he’s even more aware of now as an employee in the shop.

“It’s going to be crucial that we keep these trucks in one piece being a fifth team so we can go to the next one and have a good competitive race truck,” he said. “With all those things being said, I think we can do that and run competitively inside of the top 10 would be a great day for all of us.”

The Truck Series hits the track for its next race Saturday, May 22 for its inaugural race at Circuit of the Americas at 1 p.m. ET.