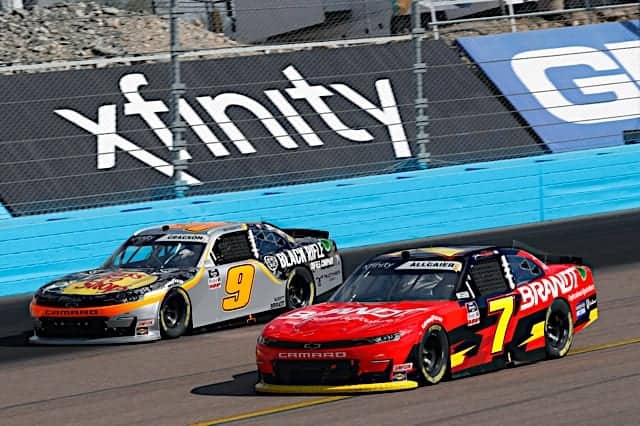 JR Motorsports had a great week. First, it was announced that Dale Earnhardt Jr. would run the NASCAR Xfinity Series race at Richmond Raceway on September 11. Then Justin Allgaier fought off his teammate Josh Berry to win the Xfinity race at Darlington Raceway, giving him two wins on the season.

However, one of the biggest news stories came out this week as well, as it was reported that JR Motorsports is still considering whether or not the team would make the move to the NASCAR Cup Series in 2022. Earnhardt said it’s “now or never” for his team to make the jump as the landscape of ownership in the NASCAR Cup Series is changing and with NextGen Car coming, everyone should be on a more even playing field.

However, there are still some major hurdles the organization has to do if they want to move to the Cup Series, including obtaining a charter that would allow the team to be locked into every race and make similar income to Cup Series teams.

Should JR Motorsports make the jump to the Cup Series?

It’s time! It is time for JR Motorsports to make the jump to the Cup Series. The organization has proven everything it can in the Xfinity Series including championships with drivers Chase Elliott, William Byron and Tyler Reddick.

The 2022 season has the potential to change the NASCAR ownership landscape drastically. The NextGen Car is expected to be a game changer for the owners in the Cup Series. The car will be pretty much a spec car, where teams will not build cars in house , but instead buy it from the suppliers and put the pieces together. This will save teams a ton of money on inventory and will save teams money on employment costs. The fabrication process that is currently in place in the Cup Series will be pretty much non-existent. This will help a new team entering the Cup Series for the first time. That alone would be reason to make the jump to the Cup Series.

There is currently no data generated for the car, so everyone starts with a fresh slate in 2022. If JRM decided to wait a year or two longer to get into the Cup Series, that would not be the case. The team would be behind on data and behind everyone else who worked with the car and has a leg up on the data. It makes the decision easier for the organization.

JR Motorsports also has a great relationship with Rick Hendrick. Earnhardt drove for Hendrick and, more importantly, JRM currently works closely with the organization in the Xfinity Series. If that relationship can continue to the Cup Series, it will make both organizations stronger. Instead of working with four teams, the expansion of JRM to the Cup Series means both organizations could have eight cars working together. That would be a huge benefit for both teams who are trying to learn as much as they can about a new racecar. That’s another reason why the time is now.

I’m a believer in people win championships and HMS has a ton of people who have the experience in winning races at the Cup level that can assist JRM in their transition to the Cup Series if needed.

The final piece of why it makes sense to do it is the initial cost factor. While the rules are not etched in stone yet, teams will only be allowed to have seven cars in their inventory at any given time moving forward.

The initial costs for the cars are going to be high. If teams are only allowed to have seven cars, the owners are going to have to put that money out up front. Since the car is being made by one supplier with the same mechanisms, there won’t be a difference between cars. The goal is to reuse them as long as they are capable. All teams will have to shell out a good chunk of cash at the beginning of the 2022 season. If JRM decides to wait past 2022, they will be way behind financially versus every other team.

Too Much to Go Cup Racing

While Earnhardt was an accomplished Cup Series driver, he would have a tall mountain of tasks to do to bring JR Motorsports up to the Cup Series.

Chief among those tasks is the acquisition of a charter. There are only 36 charters, and the value of a charter has risen. Three new teams entered the Cup Series this year, leaving JTG Daugherty Racing without a charter, and Kaulig Racing already has announced it will field a full-time Cup Series entry next year. Moreover, 23XI Racing wants to expand soon as well. So, Earnhardt must secure a charter, which will be an expensive upfront cost.

If JRM secures a charter, its entry to the Cup Series is still challenging. The team then needs both a driver and sponsor. Allgaier and Michael Annett bring funding to their respective Xfinity Series entries, but both have struggled in their Cup Series starts. JRM is accustomed to contending in the Xfinity Series; would Earnhardt be content with a back-of-the-pack Cup Series finish for his team?

Funding is critical in racing, especially at the Cup Series level. Without sponsorship, MBM Motorsports opted to field its Cup Series entry on a part-time basis this season.

Earnhardt has been open about JRM’s need for sponsors. Although Berry is one of the hottest Xfinity Series drivers, he is only scheduled to compete part-time, as Miguel Paludo, Earnhardt, and Sam Mayer will fill out the rest of the races for the No. 8. Paludo and Mayer both bring funding. Without their funding, Earnhardt may have opted for another driver instead of Berry. While he has a famous last name, Earnhardt cannot fund a Cup Series team himself, nor has he been able to land a full-time sponsor for one of his Xfinity Series teams. The tall task of fielding a Cup Series team continues for JRM.

If JRM secures a charter and sponsor, then the team must hire a driver. While JRM could hire a proven driver, that driver will demand a bigger paycheck. JRM could therefore hire a rookie driver, but in the last 10 years, Cole Custer has been the only (full-time) driver to win in a Cup Series rookie season. JRM seeks success, especially if it is searching for more sponsorship. A rookie driver likely would not achieve instant success, making it financially tough for the team.

Oh yeah, a large hurdle for JR Motorsports’ entry into the Cup Series is the NextGen Car. Yes, it is marketed as cheaper than a current Cup Series car, but JRM owns none of those cars (teams won’t begin receiving chassis until June). Purchasing NextGen Cars would be an enormous upfront investment that should make Earnhardt pause. Perhaps JRM could dabble in the Cup Series in the future but joining it full-time next year will be incredibly expensive with no guarantee of success.

As mentioned, JRM fields four competitive entries in the Xfinity Series. Allgaier has won twice this year, Noah Gragson won twice last year, and Annett has finished in the top 15 in the point standings in his last 10 Xfinity Series seasons. Berry won at Martinsville Speedway and Mayer is a talented prospect. JRM is the top Chevrolet team in the Xfinity Series; in the Cup Series, it would compete with Hendrick Motorsports, Richard Childress Racing, Chip Ganassi Racing, etc. for manufacturer support. All those hurdles to climb do not make the Cup Series a wise investment. – Mark Kristl.

I think Dale Jr needs to put at least one car and driver in the cup series next year. I feel with practice and qualifying coming back for the next gen Dale Jr has a chance to qualify for races without a charter. I personally feel that JR motorsports should do what Kaulig racing has done, next year make a handful of starts then move one car in at a time from part time to full time. JR motorsports needs to come in slow in steady without losing tons of money.

Doesn’t matter a bit. Mark Martin is coming back to race the new IROC cars. Maybe for Jr !

Junior should have a long talk with Cal, DW and Richard Petty. Then compare notes with Hendrick, Penske and Childress.

JRM should just stay in the Xfinity series. Better to be a premier team there than an also-ran in Cup.

Leave JRM in Xfinity. Acquire rights (if needed) to relaunch DEI as a Cup team.

DEI is still owned by Teresa Earnhardt as far as I know. Junior left the organization just to get away from her.