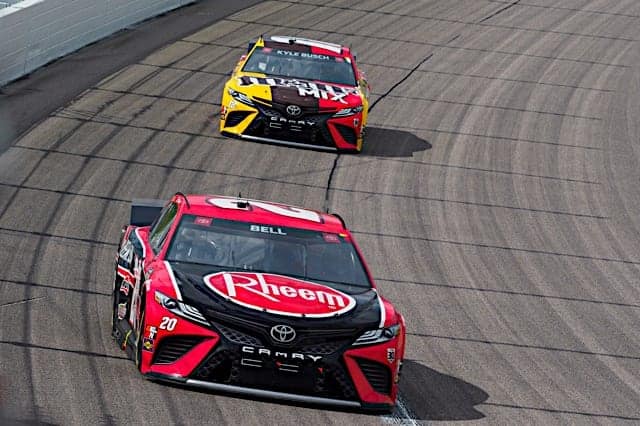 Ever since the team’s inception in 1992, Joe Gibbs Racing has become a monolith of what a successful NASCAR organization looks like. A whopping 190 wins and five Cup owner championships are part of a certain Hall-of-Fame bound legacy established by the will and perseverance of its founder. “Coach” Joe Gibbs continues to preach a teamwork philosophy, built from his Super Bowl-winning NFL days, that keeps this four-car Toyota stable atop the weekly list of contenders.

Their success continued Sunday (May 9) with Martin Truex Jr.’s win in the Goodyear 400 at Darlington Raceway, which came after the driver of the No. 19 led 248 of 293 laps. In the same race, teammates Kyle Busch and Denny Hamlin scored top-five finishes of third and fifth, respectively. And if not for suffering a deflated tire in the final 10 laps, Christopher Bell would’ve had a top-10 finish in the bag. It was a remarkable team performance all around.

Joe Gibbs Racing has a trophy collection from almost every NASCAR racetrack imaginable, including the next stop on the schedule at Dover International Speedway, where they’ve scored nine career Cup wins.

Can the team reach 200 career victories across the board by the end of 2021? It’s possible if they capitalize at some of their best tracks, including these five below where they’ve experienced the most NASCAR success through the years.

Statistically speaking, there is no other track on the NASCAR schedule that Joe Gibbs Racing looks forward to more than Richmond. The team has collected 16 wins at the facility, spanning from Tony Stewart’s first Cup win in 1999 to Truex’s first short track triumph in 2019.

There is also Kyle Busch’s remarkable streak of four straight spring race victories at Richmond from 2009-2012. It could have been five, but Busch had a win slip out of his grasp because of a late-race run-in with Dale Earnhardt Jr. in 2008.

Busch also tangled with Carl Edwards in 2016, losing another potential trophy for JGR. More recently, Hamlin was shaping up to take home a likely win in April before an opportunistic Alex Bowman stole it courtesy of a late-race restart.

Richmond’s second race will occur on September 11 during the first round of the playoffs, an opportunity for Hamlin to avenge his loss. Busch also swept the two Cup events at the Commonwealth’s track in 2018, as did Truex in 2019, while Hamlin has three Cup wins there and Bell posted a trio of victories in the NASCAR Xfinity Series.

Winning the fall race there this year would be a great way to continue the championship quests for at least one of JGR’s four drivers.

Joe Gibbs Racing has an impressively stout record at Pocono as well. The organization has a whopping 15 wins at the “Tricky Triangle,” spanning over the course of two decades. Many of those victories had dramatic footnotes to them as well.

Bobby Labonte bested Earnhardt Jr. in a head-to-head fight for the win in 2001. Denny Hamlin spectacularly captured both poles and races as a rookie in 2006. In 2012, we saw a battle between a kid and a veteran, as Joey Logano won a thriller over Mark Martin.

In the same fashion as last year, Pocono will host a doubleheader weekend for the Cup Series on June 26 and 27. Hamlin was victorious in the first doubleheader race in 2020 and JGR could well make it a two-day Pocono sweep in 2021.

We traverse back to Virginia and further south to the short track of Martinsville, where JGR has had success at for many years and collected a “lucky” total of 13 Cup wins. Like Pocono, JGR has many electric performances at the paperclip, producing plenty of grandfather clocks for its driving corps.

The commonwealth’s own Hamlin is the proud collector of five such clocks at the short track, with the most memorable triumph being his thrilling overtime charge to win in 2010.

Kyle Busch took home a clutch playoff win in 2017 where viewers watched a fireworks-style finish under the lights for the first time in speedway history. Of course, that win came in the same race Hamlin and Chase Elliott made contact, spinning out the No. 24 team and ruining their title bid.

Truex has won three out of the last four races at the paperclip-shaped oval, so the strongest odds will be on him to succeed there. And, with the second Martinsville date being the finale for this year’s Round of 8, the stakes are higher than ever. Held on Halloween night this year, Gibbs has a chance to spook the field and launch one of their drivers straight into the Championship 4.

When it comes to taking home wins at Bristol, Joe Gibbs Racing has delivered 13 of them at the half-mile Tennessee short track. Eight of those have come from none other than Busch, living up to his “Wild Thing” nickname down in Thunder Valley.

Busch’s first win at Bristol came in the first race of the Gen-5/Car of Tomorrow model in April 2007. He completed two historic weekend sweeps in 2010 and 2017 across all three touring series; then, he spun and won in the 2019 spring race ahead of brother Kurt Busch.

There are many more years ahead for the younger Busch to add more Bristol trophies to his specialized case at the Kyle Busch Motorsports shop. The eight Cup wins are the most for him at any NASCAR track on the schedule.

This year’s Bass Pro Shops/NRA Night Race will be held on September 18, which will conclude the first round of the Cup playoffs. The combination between Bristol and the postseason is the perfect mixture of uncertainty, tension and chaos. Out of that (and, predictably, battered fenders and smoke) might roll a JGR Toyota … right into victory lane.

The final spot goes to two tracks that have back-to-back July dates on the 2021 calendar. The summertime swing proves to be good timing for Joe Gibbs Racing, as they have scored 11 wins apiece at those ovals.

Bobby Labonte is JGR’s master driver at Atlanta, winning there six times between 1996 and 2003. A few years later, Busch’s 2008 triumph was a special one for Toyota, as it was their first ever Cup victory as a manufacturer.

Busch, Hamlin and Kenseth are also tied for being the winningest JGR drivers at New Hampshire, scoring three wins apiece (although Busch’s wife doesn’t take too kindly to the speedway’s crustacean trophy).

While no one’s playoff hopes will be dashed at either of these places, the JGR quartet could use the venues to build up as much of a points cushion as they can in preparation for the playoffs. Each checkered flag they collect will not only bring them closer to championship contention, but a milestone 200th victory that very few teams can lay claim to.

At Richmond in 2016, the trophy stayed in-house for JGR. Edwards was in the 19 then and drove for JGR.

Let us not forget that Coach Gibbs is a devout Christian and his teams always pray before races. He might not be a perfect man, but I am sure there is a hand in his success. Even if you aren’t a believer, science has proven that the art of prayer stimulates certain areas of the brain-a simple Google search will lead you to many .edu websites with information and studies on that. He also has a competitive drive. Once upon a time, I imagined what it would have been like if Gibbs was a driver instead of a football coach. I imagine he would have been extraordinarily tough ala Ryan Newman, Pearson or Logano. And in memorium, James Hylton or J.D. Muduffie (who always got more out of their cars than the money from their sponsors). I could keep listing. Today’s best is Harvick, who at RCR had subpar cars but always finished better and this year, with SHR in a slight downturn (thanks to the loss of 70 clicks of downforce), he still has racked up top-10 after top-10. I remember watching Harvick in 97′ in a family owned truck that was junk but he always finished better.