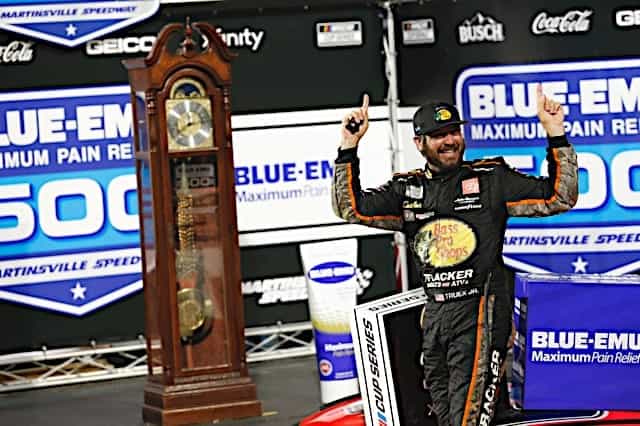 Martin Truex Jr. certainly put on a show at Darlington last Sunday, leading 248 of 292 laps on the way to his 30th career victory and third of 2021. He’s the only driver with more than one win through 12 races this season. So, with the halfway point of NASCAR’s regular season this weekend at Dover, where he’s the favorite to win, he has to be the title favorite, right?

Before we delve into talking titles, let’s take a moment to consider that Darlington win because while some fans thought it was boring, it was a hell of a performance. Dominating a race is hard. Over the course of a race, the track changes, handling changes, drivers tire, and add to that that Darlington is noted for being exceptionally difficult to keep up with. To be able to keep a car that fast over the course of a race as the track changes is incredibly hard. And Truex’s team seems to be able to do it more often than most, at different types of tracks.

That said, is Truex the favorite right now?  Sure he is; he’s got those three wins and is racking up playoff points. But there’s a lot of racing between now and Phoenix in November.

First of all, Truex isn’t the point leader. He’s more than a full race worth of points behind teammate Denny Hamlin. While that will get mostly erased by playoff resets later on, it does point to some weaknesses in the armor.

See also
Dropping the Hammer: Consistency About to Get Harder for Denny Hamlin

Twelve races in, Hamlin has finished in the top five nine times. Truex and a handful of others are second on the list with five, just over half of Hamlin’s total. Hamlin also has one more top 10 than Truex and a better average finish at this point. In other words, Hamlin is more consistent.

If Hamlin puts up nine top fives in the playoffs, you can bet he’s going to Phoenix as a contender. Now if Truex, or any other driver who hits a hot streak, wins three times in those nine races, he’s probably going to Phoenix too.

There are a lot of ways to win a Cup title in the playoff era, but season-long dominance isn’t high on that list.

Since the current playoff system took hold in 2014, the winningest driver of any season has won the title just twice. The drivers leading the most laps have had only slightly better luck, winning three titles. Average finish? Top fives?  Top 10s? Not really indicators in the long run.

In 2014, Kevin Harvick won the title on the heels of five wins, 14 top fives, 20 top 10s, 2,137 laps led and a 12.9 average finish. He topped the Cup Series in laps led that season, but that was it. Brad Keselowski had more wins (six). Both Keselowski and Joey Logano had more top fives. Jeff Gordon and Matt Kenseth finished in the top 10 more often. Ryan Newman topped the average finish.

2015 is an outlier. Kyle Busch won the title with five wins but competed in only 25 races due to an injury that kept him out for much of the regular season. So while it’s true he didn’t lead any statistical category, it’s not a fair comparison because the drivers ahead of him raced all 36 events.

Jimmie Johnson won his seventh title in 2016, his only championship under the elimination playoff format. He led the series with five wins, but Harvick’s 17 top fives easily outstripped his 11.  Logano had 10 more top 10 runs than Johnson, Truex led nearly 500 more laps and Harvick’s average was four positions better.

For fans hoping Truex’s dominance so far in 2021 will lead to another title, there’s good news. Truex’s 2017 title is the only one since 2014 in which the eventual champion led all five of these statistical categories, highlighted by his eight wins and 2,253 laps led en route to that title.

Logano wasn’t much of a title favorite in 2018, but his consistency all year kept him in contention. Despite Harvick leading every one of these categories (Harvick and Busch tied for the most wins with eight apiece to Logano’s three), it was Logano prevailing in the final race to take the trophy.

2019 marked Busch’s second title, making him the only driver with two championships under the current format. He set the standard in top 10s, laps led and average finish, but was edged in the win category by Truex, seven to five, and in top fives by Hamlin, 19 to 17.

2020 is perhaps the most jarring contrast. Harvick led every category for the second time in three seasons and wasn’t even in the picture at Phoenix. Eventual champion Chase Elliott fell short of Harvick’s numbers across the board.

To be fair, a dominant season was no guarantee of success before the playoff system. Gordon had a pair of them in the Chase era but never won a title that wasn’t a full-season one. Kenseth’s 2003 title was hardly one where he steamrolled the field. Since the beginning of time, or at least NASCAR, there have been surprise winners and champions.

But with the playoff system crowning the champion, it’s become less likely than ever that the early favorite will win the title.

Don’t count your chickens before they’re hatched, as the saying goes. And at this point in the season, just shy of halfway through the first 26, all the eggs haven’t even dropped. Don’t count anything just yet.

I think the only conclusion that can be made is that, since the advent of the chase and (more so) the playoff era, performance during the “regular season” or for that matter the entire season, doesn’t translate into a championship. That is no secret. It’s the reason many of us have bitched about not having a full 36 race season to determine the champion. The championship has become much more opportunistic in the chase/playoff era and much less reflective of the overall performance during the entire season.

Sue
Reply to  Bill B

Yes to everything you said.

We have not had an unworthy champion since the advent of the Playoff format. Every champion has been a multiple-time winner during their season, unlike what we got under the old “we-only-race-for-points” Latford system.

By the time the last event is here, Truex will be a favourite. So will Hamlin (with some wins). So will Baby Busch. So will Harvick. So will Kes…

Everyone is in the chase except Bubba, who has proved he is a driver that is not capable of even running in the top 20 with the best equipment.