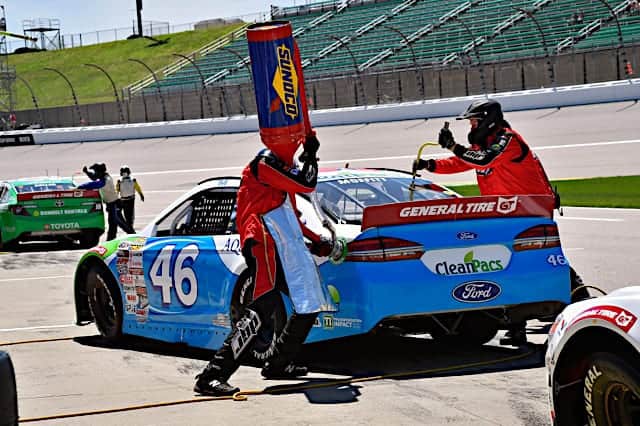 Since it returned from its hiatus due to the COVID-19 outbreak, the ARCA Menards Series has not held a race with live pit stops. Instead, all of its races have consisted of modified pit stops.

“We’ll see modified pit stops for the near-term future,” ARCA communications manager Charles Krall told Frontstretch. “It is a cost-savings thing. The cost of renting pit crews had gotten out of hand. Last year, it was the right thing to do to keep our teams in business.”

Indeed, ARCA struggled mightily last year. Although it completed all 20 races, some of which were realigned. Only four drivers competed in all 20, further emphasizing low car counts — less than half of the races had at least 20 competitors.

This year, ARCA seems to slowly be improving. Car counts are either steady or on the rise, as all four races have seen at least 20 drivers compete. Nevertheless, the series continues running races with modified pit stops. Moreover, some races have a five-minute break for teams to perform pit stops at approximately halfway during an event. Series officials understand it is not the fans’ desired format, especially at some tracks on ARCA schedule that are not on any NASCAR national series schedule.

“It is a shame we had to change that procedure for a couple of reasons,” Krall said. “Our fans like seeing live pit stops at tracks like Toledo Speedway, Winchester Speedway, Berlin Raceway; that is a big part of the show for those fans. They do not get to see that kind of stuff but one time a year. The survival of our race teams was our number one priority.”

Even before the COVID-19 pandemic, ARCA planned on having modified pit stops at some select tracks to ensure pit road safety, including its two dirt track races at Illinois State Fairgrounds and DuQuoin State Fairgrounds.

“The last thing we want is someone on pit road to get injured,” Krall reiterated.

ARCA prides itself on being a developmental series, but should part of that development include live pit stops for drivers and pit crews?

“We are very aware our drivers use this platform as a training ground to learn the cars, the tracks and the procedures,” Krall said. “Learning how to come down pit road and maintain your pit road speed all the way down is a big part of that. We want them to have live pit stops. There are some other overriding issues that we feel we need to take care of to allow the survival of our race teams for right now.”

Ty Gibbs has won two ARCA races this season, but after he received two pit road speeding penalties in the NASCAR Xfinity Series race at Darlington Raceway, he advocated for the return of live pit stops in ARCA so he can hone his pit road skills.

“We should have live pit stops,” Venturini told Frontstretch. “We were live for many years. I understand it is a cost savings measure, but I feel like it is lessening our product. I am all for saving money but there are ways we can do this where it does not lessen the product we give to the fans. Not having live pit stops hurts what we’re giving [the fans].

“You need to have comers and goers, people on different tire cycles, pit strategy letting someone take a Hail Mary by holding off on tires until late to try to win the race. You need all those elements for a good, competitive, well-rounded race. If not, it is glorified practice sessions, and you are going to finish by the speed of your car. You need to have that element of chance and it’s not happening with the formats we’re operating under.”

Venturini told Frontstretch it costs between $3,000-$3,500 for a pit crew to complete live pit stops per race. While modified pit stops save teams money, it still costs approximately $2,200. While saving $1,000 equates to $20,000 over the 20-race season, Venturini believes it is not enough savings to justify a lower product.

However, the upcoming race at Toledo Speedway, per the competitor site, pays $5,000 to the winner. The winning team will spend almost half of that on a pit crew alone for modified pit stops.

Venturini proposes an alternative to lower costs to teams, but it would require a majority of owners’ support.

“We could have shorter track days so we can eliminate any chance of being on the road at night,” he said. “We can eliminate practice sessions at some of these racetracks. Those are areas you can cut costs and the fans never know it. They do know what the actual race looks like. What I want to do is give the best product to the fans.

“The problem is a lot of ARCA owners do not care about the longevity of the series because none of them are in for the long haul. Everyone gets a vote when we sit down at the table and I’m not sure everyone has the series’ long-term interests at heart.”

Simply put, JGR and Venturini are top-tier ARCA teams. Live pit stops give them an advantage.

See also
Who's Hot &amp; Who's Not 4 Races Into the ARCA Menards Series Season

“Top teams will fly in pit crews and it’s a reason why they’ve won races,” Krall said. “Our desire would be everyone stay on a level playing field and not have a need to fly in a pit crew, just to keep costs under control.”

How should ARCA balance the desire to have live pit stops with the need to keep costs from rising? Krall suggested the continuation of five-minute breaks, calling it “a really fair way to do it.”

I would feel like ARCA would have to address ways to encourage higher Car Counts before Live and In Color Pit Stops are Brought Back.

@Tony Lumbis, that is a lot of needless capitalization. Shorter races? Less crewmen and all these other gimmicks hurt ARCA and NASCAR. If I pay for a 100 dollar ticket-I want to see action on the track and not just a race. Qualifying and practice. As a fan for 30+ years and an amateur racer-we need the laps. Pit stops should not be docked.

Currently only 4 crew members can go over the wall. Lets require the car owner to be one of the crew members. Live pit stops give the top teams a competitive edge, they fly in Cup pit crews for $3500 per race. That’s over 1/2 our budget for the race weekend with all our volunteers. When racing gets to the point only top teams are remotely competitive, the car counts will be in the single digit.