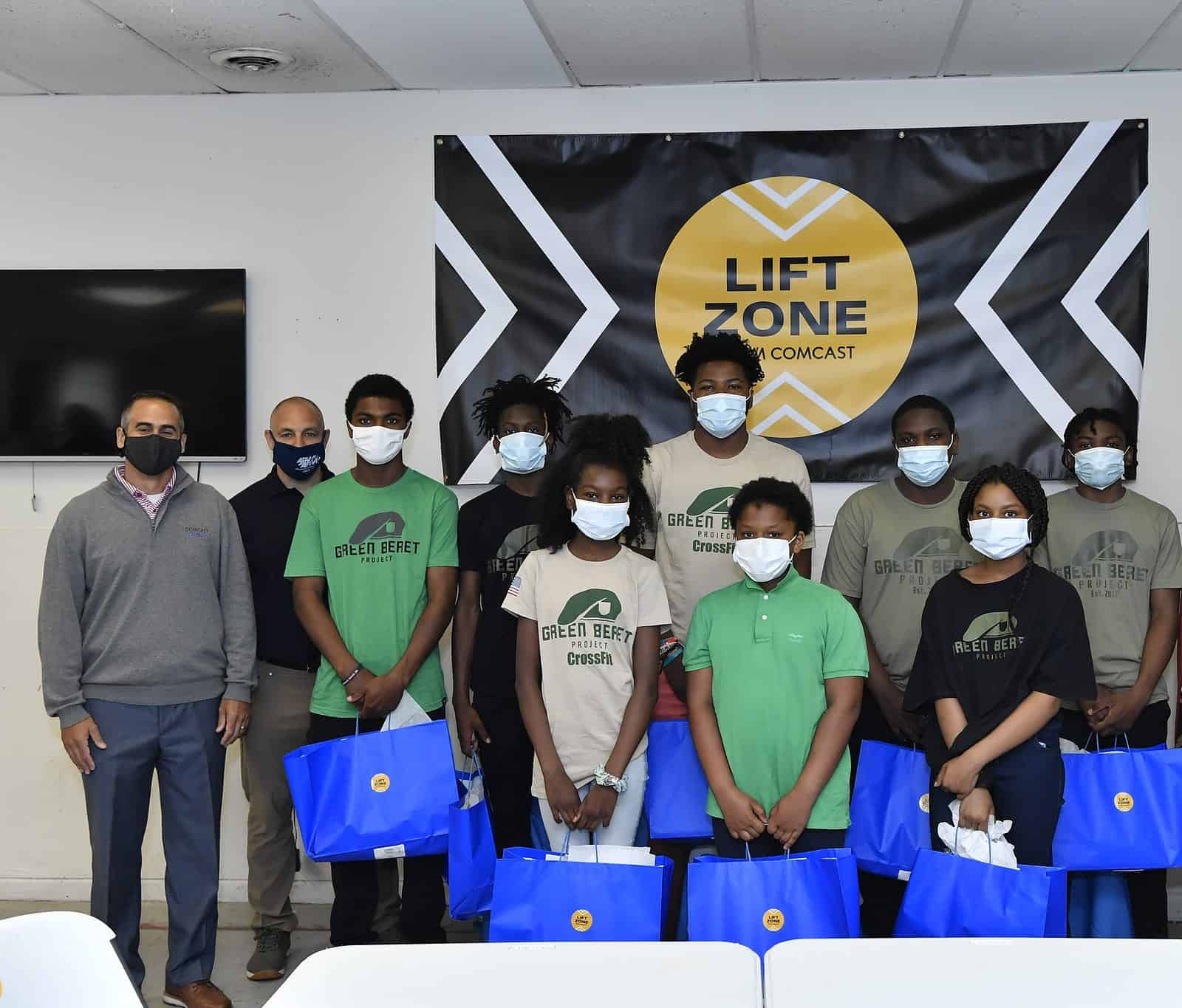 Since entering NASCAR as the entitlement sponsor of the Xfinity Series, Comcast NBCUniversal has continued to give back. It is doing so again leading into the final Dash 4 Cash race of the 2021 season this weekend at Dover International Speedway.

Last September, Comcast vowed to open 1,000 new high-speed Wi-Fi Lift Zones throughout the United States by the end of 2021. As the calendar closes in on four and a half months into 2021, the company has already opened over 650 new zones.

Located in nonprofit community centers, gyms and recreation facilities across the country, Lift Zones are dedicated to serving free Wi-Fi to students, adults, seniors and veterans.

With a partnership with the Green Beret Project, which offers at-risk youth dynamic programming after school and on weekends, Comcast recently opened a Lift Zone in Dover, Del. The Lift Zone is a safe space for students to access the internet for free, allowing them to participate in distance learning and do schoolwork. The students at the center will also receive laptops to help them close the digital divide.

“Those are military members giving back to their community, giving back to the at-risk youth in Dover,” Rebecca Gray, Executive Director of Military & Veteran Affairs at Comcast said. “It’s a really powerful program and a real privilege to be partnering with [the Green Beret Project].”

The opening of the new Lift Zone hasn’t gone unnoticed by important people in the Dover community.

“When you think about what the Lift Zone is all about and what these guys and gals are trying to accomplish, it really goes hand in hand with what [Comcast’s] mission is,” Mike Tatoian, president of Dover International Speedway and 2019 Comcast Community Champion of the Year winner said. “It’s a really cool organization that Comcast has partnered with in Dover.”

Known for its extensive work with military families, Comcast is still on pace to reach its 21,000 goal of hiring military members, spouses and National Guard and Reserve members by the end of 2021. Furthermore, the company announced in March, on the 10th anniversary of Internet Essentials, that it would invest $1 billion over the next 10 years to further close the gap and provide more low-income Americans the resources they need to succeed in a technology-centric world.

“For years, Comcast has shown its commitment to supporting low-income families and veterans by ensuring they have access to an affordable and reliable internet connection,” Adam Kramer, state director of The Green Beret Project said in a press release. “We’re proud to partner with Comcast on the opening of this Lift Zone and look forward to the positive benefits it will bring to the Dover community.”

Dover isn’t the first NASCAR market that has a Lift Zone in it. Ahead of the opening Dash 4 Cash race this year at Martinsville Speedway (April 9), Comcast announced it was opening a WiFi-Connected Lift Zone in the Martinsville, Va., community.

Despite the racetracks playing centerstage on certain weekends for NASCAR, the Lift Zones are important for the local community.

“I think it shows that, even as a big racetrack in a small community we, too, like Comcast, we’re concerned with our own community,” Tatoian added. “For one of [the Lift Zones] to be located here in our community – because I think a lot of us, you take things for granted. ‘Well of course you have internet at home.’ Well, not everybody does, especially with the pandemic and where we are and the importance of education and getting access.

“Without these Lift Zones, many families and many young kids aren’t able to accomplish what they need to accomplish. [This] punctuates another reason why Comcast has been such a great partner to our sport and does so much for our community.”

As it pertains to the NASCAR Xfinity Series race, Brandon Jones, Justin Allgaier, Josh Berry and Noah Gragson will battle for the $100,000 bonus. It will be the sixth time an Xfinity Dash 4 Cash race has played out at Dover, one of the Philadelphia-based Comcast’s home racetracks.

Tatoian believes having the Dash 4 Cash at Dover adds excitement to the weekend of racing.

“As a track promoter, you’re always looking for any kind of distinguishing factors that would pertain to your particular race,” he said. “Anytime we can add something on the track for fans in the stands, that adds more excitement than what we would normally get racing, I think it’s great. I think the fact we get to participate in another Dash 4 Cash for the Xfinity Series is great and just adds another element of fun to our fans watching the race.”

Parlaying that the Lift Zone in Xfinity’s backyard makes it all the more special for the company.

“I think it’s an exciting time to celebrate our work in these Lift Zones, and there’s one right there in Dover, serving those students,” Gray said. “I know our company’s commitment to that, and to be celebrating right there and acknowledged at this race is really exciting.”

Over the last four years, Comcast has donated more than $200,000 during NASCAR’s Dash 4 Cash races to help those markets close the digital divide. Those efforts have allowed local nonprofits in each Dash 4 Cash market, from Veterans Service Organizations to Boys & Girls Clubs (there’s one in Dover), to make Internet connectivity further accessible for low-income people.

As for other NASCAR initiatives this season to honor the military, Comcast will provide red, white and blue Xfinity windshield headers on all the racecars for the Alsco 300 at Charlotte Motor Speedway on Memorial Day Weekend to celebrate the company’s commitment to the military.