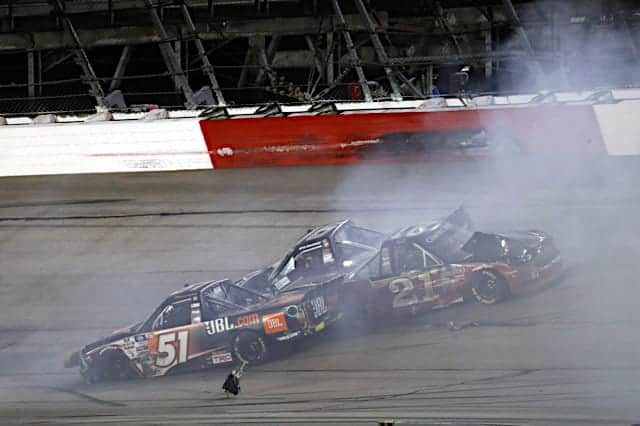 Whenever a driver is involved in a wreck, the team asks over the radio, “Are you OK?” Because while Dale Earnhardt was the last fatality in a NASCAR national series event, injuries still occur due to crashes. Aric Almirola, Kyle Busch and Ryan Newman are just three drivers who have sustained injuries in a race that forced them to miss further races.

This year, in all three national NASCAR series and the ARCA Menards Series, there has been a bevy of hard hits. Fortunately, other than Derrick Lancaster, all other drivers have escaped injury, with Lancaster recently returning home from the hospital.

Still, does NASCAR need to do anything about these violent wrecks?

Because many wrecks have not been the fault of one driver, other than ensure all safety features function properly, series officials cannot make any rules changes. Thankfully, the safety features of the race cars have worked, so all drivers have recovered.

For example, when Nick Sanchez wrecked his No. 2 in the ARCA race at Phoenix Raceway, all people saw was the junked racecar and Sanchez’s frustration with another driver.

Don’t know what to say………..gutted. I was running P3 and a lap car 3 laps down clipped my right rear and sent me head on in the wall. Can’t thank my team @RevRacin enough. We showed our speed tonight, on to Talladega. pic.twitter.com/aSpDRLYSh9

Fortunately, despite a destroyed car, Sanchez only left the track with displeasure at another driver. His hurt feelings prove his car’s safety features worked.

Likewise, in the most recent ARCA race at Kansas Speedway, Bret Holmes got loose after being in the middle of three-wide racing on the first lap. Holmes tried to save his No. 23, but it spun, and Scott Melton tried to avoid the spinning car but instead hit the driver side of Holmes’ car.

We are GREEN for ARCA racing in Kansas … or … we were …

Big trouble on the first lap for Bret Holmes and Scott Melton. Caution is out. pic.twitter.com/AHFkHPIWr0

Both drivers were successfully released from the infield care center, but Melton was visibly shaken after he feared he injured Holmes.

Again, when a driver pancakes another car on the driver-side, and all those drivers feel is frustration, it is a credit to NASCAR for developing race cars that can withstand hard contact.

When the NASCAR Xfinity Series traveled to Homestead-Miami Speedway, Noah Gragson appeared to be headed to his first win of the season. However, David Starr, who was driving lower to allow Gragson to pass him, experienced a tire issue. Starr’s No. 13 shot up the track and hit the wall, and Gragson slammed into the rear end of Starr’s car.

NASCAR Overtime is coming up on FS1 and https://t.co/qkbTgQOd94! pic.twitter.com/oxs6DlMekh

The damage to the No. 9 was terminal. Gragson was furious, making headlines that overshadowed Myatt Snider’s first Xfinity win.

Gragson and Starr feuded over the incident. Gragson argued Starr should have felt the tire issue earlier. The incident occurred during a lengthy green-flag run, so while both NASCAR and Goodyear could investigate what happened to the tire, driving a car with a tire problem is difficult.

What went unnoticed from this memorable moment from that race was both drivers were physically fine. Starr’s car shot up the 18- to 20-degree banking in the corner to slam into the wall. While his car pounded the wall on the right side, the SAFER barriers absorbed the size of the impact, and Starr was OK. Gragson too was leading the race and rear-ended Starr’s car. In a streetcar, the airbags would deploy, but physical injuries could still be sustained. NASCAR cars’ safety features differ, but the fact Gragson physically was fine is a testament to those components.

The NASCAR Cup Series’ season-opening Daytona 500 ended with a fiery wreck as cars careened out of control after Team Penske’s Brad Keselowski and Joey Logano fought for the lead.

The Penskes collide coming to Turn 3, Brad Keselowski gets T-boned by Kyle Busch and clips the catchfence in a huge fireball – everybody out of their cars and okay, fortunately. And Michael McDowell is a Daytona 500 winner! pic.twitter.com/6GgS3rv0H4

Everyone was released from the infield care center, and more astoundingly, nobody overly advocated for change.

The season-opening race weekend at Daytona is known for heart-throbbing melees. In the 2020 Camping World Truck Series season opener, Ty Majeski flipped onto his roof, and The Big One eliminated many of the contenders.

This year in the Xfinity season opener, Tommy Joe Martins appeared to have control of his car as he spun, but the front end caught the grass, and the splitter was obliterated.

And so did the moisture left in the infield grass from the rain earlier in the day. P24 is P24, and we’ll be back this weekend hungrier for a better finish. pic.twitter.com/UVJM4UWq1J

Martins called for artificial turf to be installed to replace the grass, but he did not comment on his physical well-being. Why? Because he was OK. If one wrecks their own personal vehicle, though, where all four tires are lifted off the ground and the front end is demolished, the person probably is lucky to walk away sore. More likely, that person needs medical treatment. Per NASCAR protocol, Martins went to the infield care center, but he was released.

The only bugaboo for wrecks this year came at Talladega. In the ARCA race, a bump draft went wrong, shooting Lancaster hard into the wall, and his No. 29 burst into flames.

Lancaster was subsequently hospitalized. He was released from the hospital on May 4.

ARCA officials confirmed they were investigating the incident to hopefully prevent other competitors from receiving injuries in a crash such as that one in the future.

The worst wreck this year came in the Cup race at Talladega when Logano flipped and his airborne No. 22 hit Bubba Wallace’s No. 23.

Logano called for changes from his scary wreck.

“I am wondering when we are going to stop because this is dangerous, doing what we are doing,” he said. “I got a roll bar in my head. That is not OK. I am one hit away from the same situation Ryan Newman just went through [in the 2020 Daytona 500]. I just don’t feel like that is acceptable. A lot of it is the big spoiler and the big runs and all the pushing. It is nobody’s fault.”

NASCAR personnel were astonished at the magnitude of the wreck, and series officials are considering slowing down the speeds of the cars at the second Daytona and Talladega races later this season.

Nobody wants drivers to be injured or worse following an on-track incident. Logano’s wild flip was cause for concern. Give NASCAR credit, though. Logano was outspoken, but he was OK. Furthermore, the safety features work quite well. In the case of Lancaster, series officials want to prevent similar outcomes. Drivers’ safety is always a paramount concern.

As the Next Gen car is ushered in next year, NASCAR has made a slew of changes to it. It expanded the fuel cell, its tires will now be with a single lug nut, etc.

One change NASCAR should not make it to it? Any of its safety features. Over the last two decades, they’ve been shown to work, and give NASCAR credit for that.

Good article and reminder of the good progress nascar has made.

Oh, the things we take for granted.

“This year, in all three national NASCAR series and the ARCA Menards Series, there has been a bevy of hard hits.” The word “has” should be replaced with “have.” I rarely, rarely, really find any errors in Frontstretch pieces. I don’t like Logano, but was glad he was okay. However, the driver’s of the three national series and ARCA KNOW that they could be injured. I like higher speeds at the superspeedways. The wrecks that hurt are the blunt force impacts. Please leave the grass and the hazards (such as lapped cars) as obstacles to winning. We already have the DVP, which is dumb, and this constant barrage of suspensions for lug-nuts. Let’s promote letting that go–if a team can get a car to minimum speed, they should not be parked. I personally am a fan of abolishing the Lucky Dog and returning to the days of lapped cars lining up with the leaders. In this case, the Chose Cone rule could still be used and you’d have a mixture of faster and slower cars, which IMO would make for exciting restarts. I am beginning to believe that NASCAR is becoming whitewashed. Without the element of danger, what point is there to a race? NASCAR posts no winnings amounts anymore and has degraded the point of the series…which was to highlight speed and the endurance of cars/drivers. We used to have that. Sometimes it will result in scary crashes and injuries, but that is the nature of true racing-just look at the World of Outlaws. NASCAR needs full season champions, again-this isn’t stick and ball. What made the sport unique was it’s long season, long races and great racing. Fans and the atmosphere at the track made it fun. On-track activity, such as practice and qualifying made the ticket purchase worthwhile. The cars are inherently safe. I do not ever want to see spaced out cars at Talledaga (but small packs would be cool too, even though they could still crash). I am a fan of watching a race unfold AS IT GOES without the three cautions NASCAR automatically insert. I am a fan of longer races (I can take a nap in the middle) because I want to see if our advances in technology can actually withstand the grueling length of use (I mean, we have new cars with everything from god to 12 inch touchscreens; let’s find out if a NASCAR can actually go 500 miles, without breaks except for pitstops; it may make me want to buy a new car). I am done rambling. Yet again, a great piece from Frontstretch.