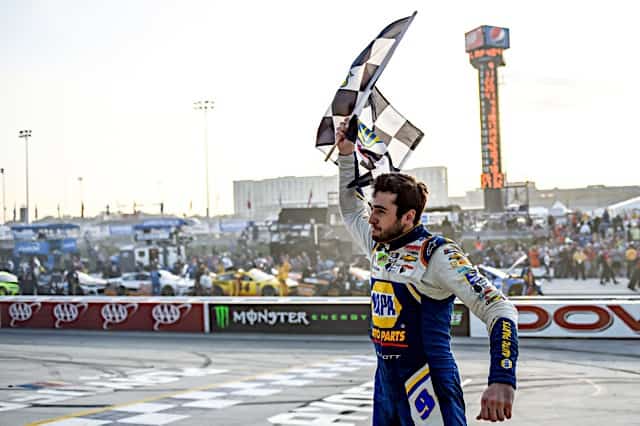 If there is a track in the NASCAR Cup Series schedule that belongs to any team, look no further than Hendrick Motorsports at Dover International Speedway.

By all means, Hendrick has a stellar record at the Monster Mile. The juggernaut stock car organization has won 19.4% of the 103 races at Dover.

Moreover, when considering Hendrick’s monstrous grip at Dover since the switch from asphalt to concrete in 1995, the team has won 17 of the past 52 Cup races at the track. For a team that’s emerged victorious in 32.6% of the races at this treacherous track, that certainly raises some eyebrows in the racing world.

Naturally, with most historical moments for Hendrick, this organization found its way into Dover’s victory lane on May 18, 1986, with Geoff Bodine shining bright in his second Cup win of the season and fifth of his career.

Ricky Rudd cleaned the competition at Dover on Sept. 20, 1992, opting for the reasonable taste of a Gatorade instead of Tide detergent.

On this date in 1992, Ricky Rudd won the Peak Antifreeze 500 at Dover. pic.twitter.com/GpPuuf15qy

Overall, Hendrick had a ways to go at Dover, winning 6% of the races at this venue from its inception in 1969 to the last asphalt race held on on Sept. 18, 1994. Then again, when considering the races that Hendrick fielded an entry from 1984 to ’94, their percentage improves to 13.6%, a respectable figure with the changes to the cars, drivers and the track starting nine months later.

Once movie lovers got over Speed and the bad but so good Eurodance music of Real McCoy in 1994, Cup drivers and teams were welcomed to a new-look Dover. Instead of taking on a quick but menacing asphalt track, the Monster Mile became a concrete beast.

As Cup stalwart Ted Musgrave said per an ESPN article in 2007, “It’s kind of like you’re at Bristol [Motor Speedway], only on steroids.”

Starting in 1995, Dover essentially became a supersized version of Bristol as a quick, physical and brutal track for drivers. When the Cup field kicked off the concrete era of Dover on June 4, 1995, it only took four laps for trouble to ensue with 19 drivers collected in a turn 4 crash.

While Kyle Petty won his final Cup race on that date, Hendrick’s domination at Dover kicked off on Sept. 17, 1995. Outside pole sitter Jeff Gordon put the spurs to his No. 24 by leading 400 of the 500 laps as he took his first of five wins at the track dubbed White Lightning.

Hendrick’s grip at Dover strengthened in 1996 when Gordon swept both 500-mile races. When you want to talk about domination, consider how Gordon led 511 of the 1,000 laps for Dover’s races in 1996, or over 51% of the laps for the track’s races.

You could say we’ve tamed the @MonsterMile a time or two. ?

Take a look back at our trips to victory lane in Dover and show us which #Winningwednesday memory you land on. pic.twitter.com/yo6GLRIgON

Like Roger Clemens with the Boston Red Sox in 1996, Gordon might have been toward the twilight of his career in 2014. That said, in his penultimate Cup season, the four-time Cup champion took his final win at Dover on Sept. 28, 2014, a victory that proved to be his second-to-last Cup win.

If Gordon was Hendrick’s version of Clemens, then it’s safe to label Jimmie Johnson as the perennial stock car team’s version of Pedro Martinez. Considering Johnson’s numbers at Dover, highlighting every victory at this track would make for a great book. Instead, highlights of Johnson’s significant wins will be featured.

Following Johnson’s maiden Cup win at Auto Club Speedway, the hotshot rookie searched for his second win of his career following after a strong but painful seventh in the Coca-Cola 600 at Charlotte Motor Speedway. On June 2, 2002, Johnson dusted off his Charlotte heartache with a delightful race at Dover. Leading 188 laps, the El Cajon, Calif., native took his second Cup win, the first of 11 victories at the venue.

Johnson swept the races in 2002 at Dover when he repeated his summertime feat with another triumph on Sept. 22, 2002. While it took Gordon four seasons to accomplish this feat, Johnson made it so in his freshman season.

Impressively, this wouldn’t be the only time that Johnson completed the sweep at Dover for Hendrick. Winning the fall race in 2005, it took a while for Johnson to return Hendrick back into Dover’s victory lane. But his return was in style.

In 2009, Johnson demonstrated a masterclass in Dover proficiency when he swept the races that accounted for two of his seven wins in his championship season. Johnson willed his way to more Dover wins in 2010 and ’12-’15 before making one more magical moment in ’17.

Jimmie Johnson's last win was at Dover in 2017. pic.twitter.com/c24gFGYMhv

Nearly bookending his remarkable career with wins at Dover, Johnson won his final Cup race at the speedway on June 4, 2017, an appropriate place for his swansong victory.

If history seemed to repeat itself for Hendrick and Dover, perhaps it’s unfolding with Chase Elliott. Much like Johnson in 2002, Elliott entered Dover searching for his second career Cup win in 2018. Elliott did not exactly dominate the fall race on Oct. 7, 2018. But much like Gordon and Johnson at their peak, Elliott won at Dover by leading the race’s final 11 laps.

As the Cup Series prepares for the Drydene 400 at Dover this Sunday (May 16), it’s safe to say Hendrick Motorsports knows what it takes to be first in Dover. While Kyle Larson‘s win in 2019 came with Chip Ganassi Racing, his experience along with Elliott’s 2018 win combined with Alex Bowman and William Byron‘s comfort at Dover makes this quartet worth watching on Sunday.