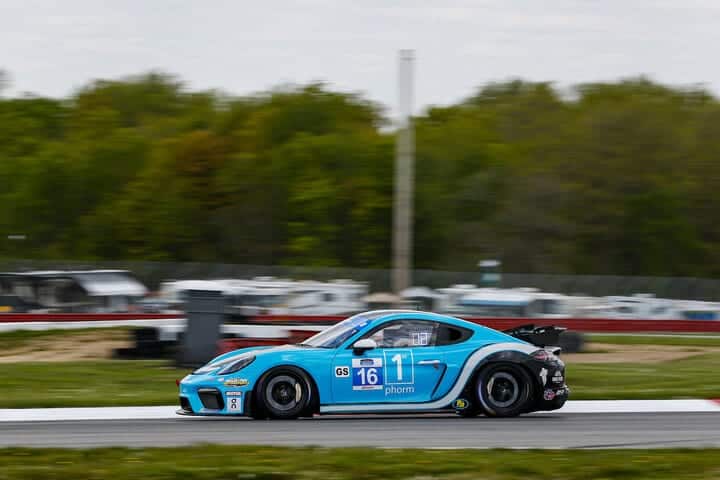 Wright Motorsports was originally scheduled to debut their Porsche Cayman GT4 MR in Daytona back in January.  However, Ryan Hardwick‘s practice crash prevented that from happening.  With a repaired chassis and the team’s planned driving duo in the car for the first time this year, Jan Heylen was quickest in both IMSA Michelin Pilot Challenge practice sessions Friday (May 14) at Mid-Ohio Sports Car Course.  Heylen’s lap at 93.254 mph in the afternoon session was the fastest practice lap of the day.

In the morning session, Heylen’s lap at 91.978 mph was fastest overall.  The lap was nearly two-thirds’ of a second faster than the Aston Martin of Archangel Motorsports’ Trent Hindman.  The McLaren of Andrew Wojteczko Autosport’s Kuno Wittmer was third fastest, followed by TeamTGM’s No. 46 Chevrolet Camaro GT4.R for Hugh Plumb.  Turner Motorsport’s Bill Auberlen was fifth in his BMW.

During the afternoon session, Heylen was able to pick up the pace.  He set the quickest lap of the day with 10 minutes remaining in the session.  The lap was more than a full second faster than he was in the morning.

Heylen’s lap was nearly a half-second faster than Hindman’s Aston Martin.  Andrews was third in his Supra, followed by Motorsports In Action’s Spencer Pigot.  Wittmer was fifth.

Matt Plumb was sixth in his TeamTGM Chevrolet, followed by teammate Owen Trinkler in the No. 64 Chevrolet.  Rebel Rock Racing’s Robin Liddell was eighth in his Chevrolet, while Foss was ninth.  HTP Winward Motorsport’s Indy Dontje was 10th quickest.

In TCR, LA Honda World Racing’s Mat Pombo was fastest with a lap at 90.872 mph, good for 18th overall.  This lap was two-sevenths of a second faster than the similar Honda of Atlanta Speedwerks’ Ryan Eversley.  JDC-Miller MotorSports’ Mikey Taylor was third in his sequential gearbox Audi, while Brian Henderson was fourth in the second Atlanta Speedwerks Honda.  Parker Chase was fifth in Bryan Herta Autosport’s No. 98 Elantra.

Qualifying for the Mid-Ohio 120 is scheduled for 5:50 p.m. Friday.  We’ll have a recap of the happenings during the session here at Frontstretch.