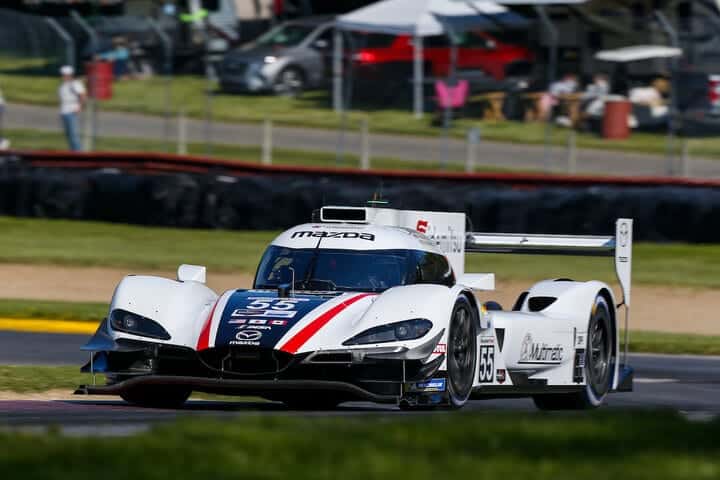 Mazda Motorsports’ Harry Tincknell set an IMSA WeatherTech SportsCar Championship track record at Mid-Ohio Saturday (May 15) en route to winning the pole for Sunday’s Acura Sports Car Challenge at Mid-Ohio Presented by the Acura TLX Type S.  Tincknell’s lap at 116.081 mph was nearly seven-tenths of a second faster than the previous track record, set by teammate Oliver Jarvis in 2019.  It is on par with the fastest-ever prototype race laps set at Mid-Ohio by Marco Werner in an Audi R10 in the American Le Mans Series.

Entering the session, the Action Express Racing Cadillac and the two Acuras had been the two fastest cars in practice, while Mazda had been down the order a bit.  For much of the session, Wayne Taylor Racing’s Filipe Albuquerque was fastest in his Acura, while Pipo Derani and Meyer Shank Racing with Curb-Agajanian’s Dane Cameron kept pace.  Tincknell was the last driver to set a time.

However, he didn’t take long to get the AER engine running quick.  A few laps in, he put himself up to second.  The next time by was the quickest lap of the day that got him the pole.  Albuquerque, Cameron and Derani tried to chip away at it, but could not prevent Tincknell from taking the pole.

Tincknell ultimately won the pole by just under a tenth of a second over Albuquerque.  Cameron will start third, then Derani and JDC-Miller MotorSports’ Tristan Vautier.

In LMP3, CORE autosport’s Jon Bennett spent much of the session at the top of the charts, looking for his first career pole.  However, it was not meant to be as Riley Motorsports’ Gar Robinson took it away from him with five minutes to go.  Robinson then improved to a lap at 105.233 mph to win the pole.  He was three-eighths of a second faster than Bennett, followed by Andretti Autosport’s Jarett Andretti.  Performance Tech Motorsports’ Dan Goldburg was fourth, while Jim Cox was fifth in the second Riley Motorsports entry.

In the GT Daytona class, qualifying is still split into two parts.  The first part with bronze or silver-rated drivers sets the grid, while the second part determines the qualifying points.

In the qualifying portion of the session, it came down to a back-and-forth duel between Vasser Sullivan’s Aaron Telitz and Turner Motorsport’s Robby Foley.  The two drivers traded quick times.  Foley turned in a lap at 100.935 mph with about four minutes to go that looked good to go.  However, Telitz charged and was able to snatch it away with a lap at 100.943 mph just as time expired to claim the class pole by a mere six-thousandths of a second.

During the points portion of the session, the Vasser Sullivan Lexus RCF GT3s were once again very quick, but Wright Motorsports’ Patrick Long pipped them right at the end with a lap at 101.505 mph to go fastest and earn the 35 points.  It is not a track record as Jack Hawksworth traversed the 2.258-mile road course seven-tenths of a second faster in qualifying back in 2018.

Long’s lap was one-eighth of a second faster than Vasser Sullivan’s Zach Veach.  PFAFF Motorsports’ Laurens Vanthoor was third, then Turner Motorsport’s Bill Auberlen and Compass Racing’s Mario Farnbacher in the No. 76 Acura.