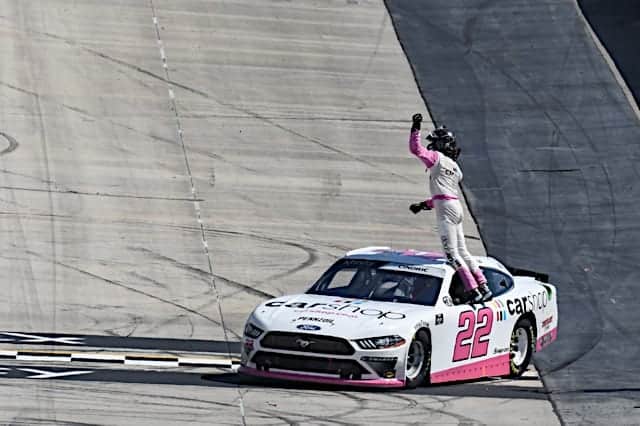 In front of a sold-out but limited crowd at Dover International Speedway, reigning Xfinity Series champion Austin Cindric tamed the Monster Mile and beat two JR Motorsports drivers to capture his third win of the Xfinity Series season Saturday (May 15).

“I’m fired up, man,” Cindric told Fox Sports 1 after the race. “I love this race track more than anywhere else we go to. So proud to get it done here.”

Caution-filled for a majority of the race’s first half, Dover stage winners Josh Berry and Justin Allgaier battled consistently in the final stage before Cindric slipped by for the lead on lap 150. With Berry finishing second ahead of Allgaier, he claimed the fourth and final $100,000 Dash 4 Cash prize.

“It could’ve been one spot better,” Berry told Fox Sports 1 with a laugh.

Numerous incidents throughout the 200-lap race resulted in six cautions. A bizarre lap 58 incident saw Matt Jaskol‘s No. 13 car bounce into the air and onto the hood of Jesse Little’s car, which brought out a 10-minute red flag. Brandon Jones was also knocked out of contention on lap 68 in a wreck with Zane Smith, who was subbing for the COVID-protocol-afflicted Justin Haley. According to Fox Sports’ Bob Pockrass, NASCAR has approved Haley to remain playoff eligible despite missing this weekend’s event.

Finishing behind the podium of Cindric, Berry and Allgaier were AJ Allmendinger, Ty Gibbs, Harrison Burton, Michael Annett, Ryan Sieg, Daniel Hemric and Brandon Brown to round out the top 10.

Next week, the Xfinity Series will travel to Austin, Texas for NASCAR’s debut at Circuit of the Americas on May 22. It will air on FS1 at 4 p.m. ET.