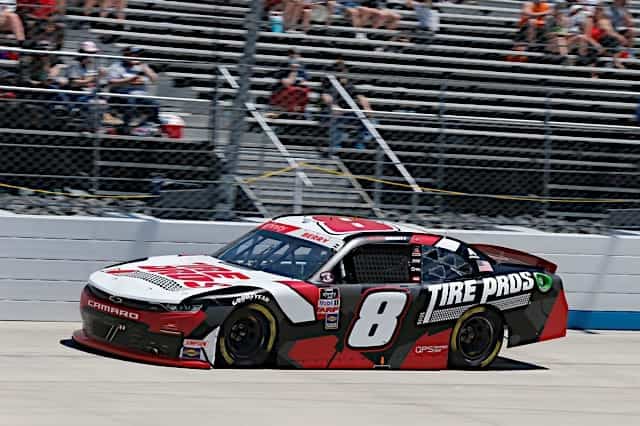 Berry earned his second consecutive runner-up finish after he led 48 laps earlier in the race. Though he really wanted to win, the Dash 4 Cash prize was a good way to end the day.

“Ah man, it could’ve been one spot better,” Berry told Fox Sports 1 after the race. “We were so good today, (crew chief) Taylor (Moyer) had this Tire Pros Chevy so good. That last run we just fired off a little too free and kinda got ate up and me and Justin got to racing each other and (Austin Cindric) got away. We just weren’t quite as good as that last run as the run before. I don’t know, man, this is my first race here. We’ve run top two or three really all day, just a lot to be proud of.”

Berry took the lead away from dominant Allgaier on lap 114, but relinquished it back to the No. 7 on a lap 145 restart. Cindric also came through and battled Allgaier for the lead, making slight contact while racing side-by-side. Allgaier received a small tire rub from the damage.

About 20 laps later, Berry’s No. 8 Chevrolet made the move on Allgaier as they passed Cody Ware.

The pass proved to be the money-winning move for Berry, who has three more races left of the season with JRM. He won his first Xfinity race a month ago at Martinsville Speedway and finished second last weekend at Darlington Raceway.

“Our team has been doing so good,” Berry told reporters on Zoom after the race. “JR Motorsports as a company has been so fast the last month or so, and we’re able to capitalize that and have some really good runs. It’s hard to be too disappointed. Life’s really good right now, I’m able to get some extra opportunities on top of what I’ve got here with JR Motorsports. I’ve got three more races with this (No.) 8 team. To have three out of the last four be first, second and second is pretty impressive. I think we’re doing everything we can right now. I don’t think that just because we didn’t win today I don’t think that, everybody saw today we were right there.”

The Tennessee native will make his Cup Series debut on Sunday in the No. 77 Spire Motorsports car. He is racing in place of Justin Haley who is out this weekend due to COVID-19 protocols.

“Looking forward to tomorrow,” Berry said. “Pretty exciting that Spire Motorsports chose me to run that car in the current circumstances. We’re going to try to get some rest tonight and try to do a good job for that group tomorrow.”

Other drivers competing for the Dash 4 Cash were Brandon Jones, who crashed out early on lap 68 after Zane Smith lost his brakes, and Noah Gragson, who had to pit in the closing laps.

The Xfinity Series takes on Circuit of the Americas next Saturday, May 22. Berry’s next event will be at Charlotte Motor Speedway the following week, May 29.