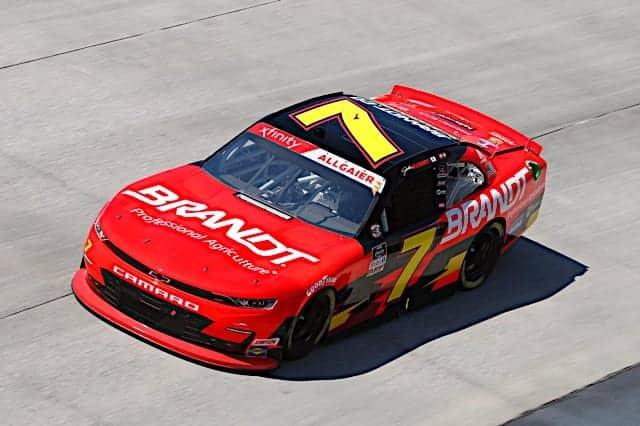 But after leading 94 of 200 laps, Allgaier came home with a third-place finish, unable to visit victory lane or the claim the Dash 4 Cash $100,000 bonus offered by Xfinity.

It was a lost opportunity for Allgaier, who entered Dover as the lone driver in the field with an Xfinity win at the Monster Mile, to catapult himself ahead of Austin Cindric in the playoff standings with a third season victory. Instead, it was Cindric celebrating a triumph and Allgaier’s JR Motorsports teammate Josh Berry who claimed the Dash 4 Cash while Allgaier walked away with nothing to show.

“It’s a bummer,” said Allgaier, who won last week at Darlington Raceway. “I felt like at the beginning of the race, we were just biding our time and managing tires, managing the car. And then the longer the race went on, I knew we were starting to struggle a little bit.

“We threw some big adjustments at it and unfortunately it just didn’t respond like we wanted it to.”

Most drivers would likely beat up on themselves after losing out on winning either the race or a significant financial bonus. Most drivers aren’t Allgaier.

Allgaier maintained an optimistic outlook, noting it was hard to be disappointed with a third-place run while that bonus still came home to JRM, which swept the Dash 4 Cash races thanks to Noah Gragson and Berry.

“For me, I’m just blessed to do what I love to do,” Allgaier said, “and a top three is still a great day for us.”

Allgaier’s car began to fade near the end of stage two. After leading all but two laps of stage one, Allgaier fell into the clutches of Berry midway through the stage before Berry worked past the No. 7 car en route to the stage two win.

While Berry drove to the stage win, Cindric started to flex his muscle on Allgaier, patiently stalking the No. 7 car in a tense battle for second that Allgaier eventually won.

Allgaier won the race off pit road to start stage three, but Berry tracked him back down in 22 laps to take it back. From there, Allgaier found himself waiting for a chance to get back to the front until he cleared Berry for the lead on lap 145. But only five laps later, Cindric flew to Allgaier’s inside, side-swiped the No. 7 car, and sped away to the win.

“I felt like the track changed a lot obviously with the rubber that got laid down,” Allgaier said. “On a green surface, I felt like our car was as good as anybody’s. Especially on those restarts, we were able to really charge through. We kept making adjustments on it and [crew chief] Jason Burdett and the boys did a good job just trying to keep up with the race track as it was changing.

“But I just felt like for us, when the track got rubbered in and got greasy, we were just not in the racetrack as good as I’d like to be.”

Allgaier scored his ninth top-five finish in the last 11 Dover races. But some of his past experience may have bitten him Saturday since tires didn’t wear as heavily as he expected.

“It was interesting because I felt like in years past, the tires have definitely fallen off a lot more,” Allgaier said. “I feel like that was somewhat of a mistake on my part to try to conserve tires maybe a little bit too much early on.”

And just as competitors may worry about starting their seasons too strong, Allgaier admitted having so much clean air so early can handcuff decision-making in the front end of the race.

“I think sometimes when you start up front and you lead that many laps early, you put yourself in a bad spot because you don’t really know how much adjustment you need to make,” Allgaier said. “We were making adjustments the whole time, but I felt like just managing the race was going to be important today.“

Heading into a new track in Circuit of the Americas next weekend, Allgaier will look to capitalize on recent momentum. With two wins on the year, the No. 7 team has top 10s in five of the last six races, the only exception coming at Talladega Superspeedway with a 29th-place finish.

The Xfinity Series hits COTA on Saturday, May 22 at 4 p.m. with live television coverage on Fox Sports 1.