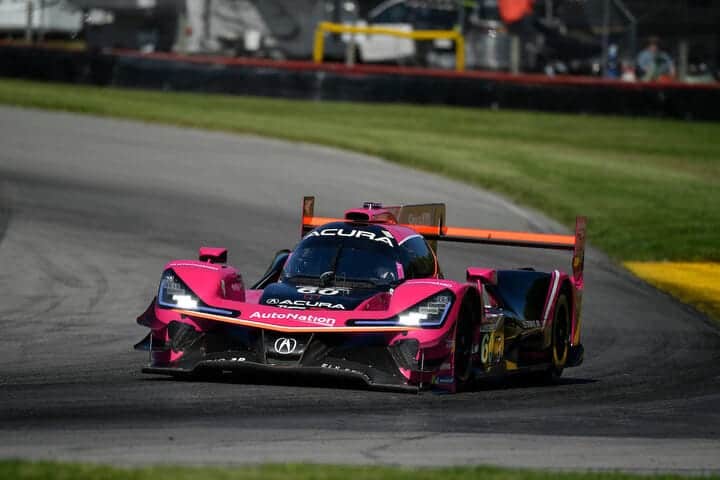 For the IMSA WeatherTech SportsCar Championship, the two pre-qualifying practice sessions were split into separate days.  Session No. 1 was held Friday afternoon (May 14), while Session No. 2 was early Saturday morning (May 15).  Meyer Shank Racing with Curb-Agajanian’s Dane Cameron ultimately was fastest with a lap at 114.869 mph.

Derani’s lap was three-eighths of a second faster than the Acura of Wayne Taylor Racing’s Ricky Taylor.  Cameron was third after leading a good chunk of the session.  Chip Ganassi Racing’s Renger van der Zande was fourth in his Cadillac, while JDC-Miller MotorSports’ Tristan Vautier was fifth.

The LMP3 class saw CORE autosport’s Colin Braun top the chart with a lap at 105.241 mph, good for seventh overall.  This lap was one-tenth of a second faster than Andretti Autosport’s Oliver Askew.  Askew’s pace came after teammate Jarett Andretti stalled the car right after leaving the pits (too early) at the start of the session.  This resulted in the session’s only red flag.

In GT Daytona, the beginning of the WeatherTech Sprint Cup doesn’t really change anything as far as outright pace goes.  Jack Hawksworth has consistently been one of the fastest drivers in the class over the past three years and Friday was no exception.

Hawksworth was fastest in class with a lap at 100.963 mph, good for 13th quickest.  Hawksworth’s lap was one-eighth of a second faster than Turner Motorsport’s Bill Auberlen.  Wright Motorsports’ Patrick Long was third fastest in his Porsche, followed by the similar Porsche of PFAFF Motorsports’ Laurens Vanthoor.  Paul Miller Racing’s Bryan Sellers was fifth.

For Gradient Racing, they also ran into trouble at the beginning of the session.  Till Bechtolsheimer suffered left front damage to his Acura NSX GT3 Evo after possible contact with another car.  The team was able to make repairs to their green and yellow Acura and get back out there.  Marc Miller eventually set a time that put Gradient Racing ninth in class.

The entry list originally indicated 27 teams would contest the weekend.  That number is now 25 due to two withdrawals.

First, Forty7 Motorsports withdrew their No. 7 Duqueine M30-D08-Nissan.  It appears that the team never confirmed a second driver to pair with Austin McCusker.  The team is still on-site with their entries in the IMSA Prototype Challenge race scheduled for Sunday morning.  Forty7 Motorsports’ withdrawal means that all six LMP3 cars will be Ligier JS P320-Nissans.

In addition, GRT Grasser Racing Team chose to withdraw their No. 19 Lamborghini Huracan GT3 that was to be driven by Misha Goikhberg and Tim Zimmermann.  This is an extremely busy weekend for the team as the ADAC GT Masters season kicks off at Oschersleben in Germany.  In addition, the No. 19 Lamborghini with Franck Perera at the wheel had a significant mechanical failure back at Sebring, which led to this crash:

The Action Express Racing No. 31 Cadillac led for the vast majority of the session Saturday morning.  However, Cameron put down the fastest lap of practice right at the end of the session.

Cameron’s lap was nearly a quarter of a second faster than Derani.  Wayne Taylor Racing’s Filipe Albuquerque was third fastest, then Mazda Motorsports’ Harry Tincknell and JDC-Miller MotorSports’ Tristan Vautier.  Vautier’s teammate Loic Duval had quite the adventure halfway through the session.  Duval went off-course at turn 9 and had a “wild ride,” but managed to continue without issue.

In LMP3, Murry was fastest with a lap at 106.112 mph, good enough for seventh overall.  This was six-hundredths of a second faster than Barbosa.  Fraga was third quickest, then Braun and Askew.

Finally, Vasser Sullivan’s Aaron Telitz was fastest in GT Daytona with a lap at 101.534 mph.  He was two-tenths of a second faster than PFAFF Motorsports’ Zacharie Robichon.  Frankie Montecalvo was third in the second Lexus, while Paul Miller Racing’s Madison Snow was fourth.  Turner Motorsport’s Robby Foley was fifth.

There were no red flags during the session, but Wright Motorsports’ Ryan Hardwick did spin in turn 5 early on.  He was able to recover his Porsche and continue.