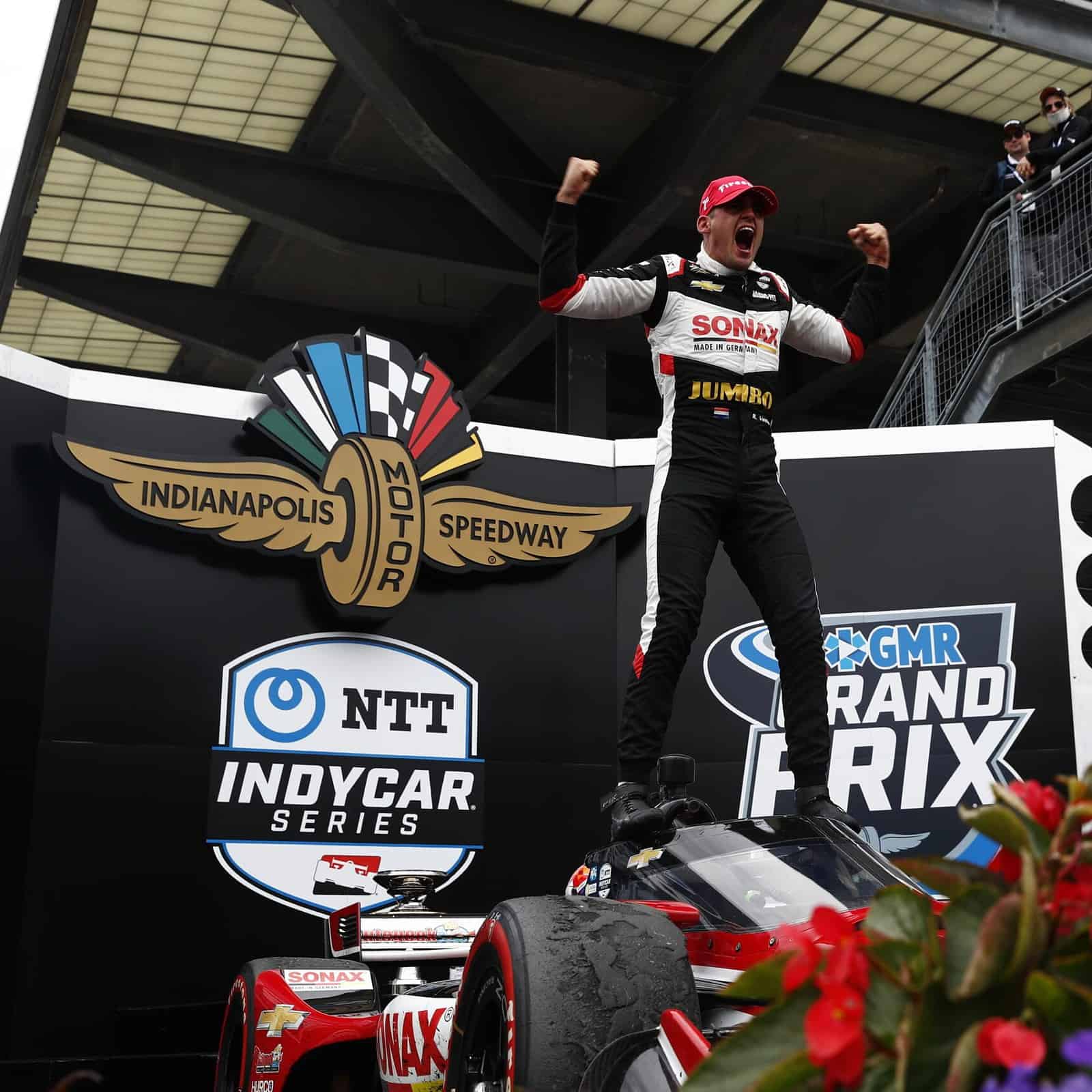 While Grosjean led from pole and maintained control over the majority of the race, pit strategy ultimately put VeeKay in the lead, and the young Dutchman managed the race brilliantly from that point. By the race’s end, VeeKay’s lead over Grosjean was stretched to 5.2 seconds, despite Grosjean matching and later exceeding VeeKay’s pace.

VeeKay was joined by his emotional family in victory lane, relishing in his maiden victory.

“I knew we had the car, we were so fast“ said VeeKay, who described his race as “the perfect day.” The win came at the same track where VeeKay scored his first career podium last year.

Grosjean still managed to walk away with his first IndyCar podium. Grosjean described the race as a “really good day.” Grosjean continued that, “Bahrain was horrible, but it has been great for my life” in reference to his horror crash in last year’s Formula 1 Bahrain GP, which cut his F1 career two races short.

Grosjean displayed a very impressive pace on the softer, less durable red tires, being competitive and maintaining his lead even as the tires aged considerably. Grosjean had expressed before the race that he was very pleased with his pace on old red tires, citing that ability to stretch his tires as perhaps his best asset for the race.

However, Grosjean’s largely dominant race wasn’t without incident. As the race passed its halfway point, Grosjean twice clashed with defending Indy 500 champion Takuma Sato, who was fighting to maintain his position on the lead lap. The time lost eventually put Grosjean within striking distance of VeeKay, who overtook Grosjean on the entry to turn 12 the very next lap.

The two swapped the lead through pit stops, with each driver leading briefly at the other’s expense. As the last round of pit stops came to full swing just after the 60 lap mark, VeeKay cycled out in front of Grosjean with ease after committing to an undercut pit strategy in his bid for the race lead.

With less than 20 laps to go, sprinkles of rain began to turn into a legitimate compounding factor. Fortunately for VeeKay, the rain did not intensify to an extent that would have necessitated an extra pit stop for wet tires, and he was free to retain his lead until the checkered flag.

Series champions Simon Pagenaud, Will Power, and Scott Dixon were largely non-factors throughout the race. Dixon did manage to lead briefly during the pit cycles, though Pagenaud’s impact on the race was mostly limited to his contact with Conor Daly into the first turn on lap 1, which left Daly to retire while Pagenaud carried on. The 2021 rookie class enjoyed a solid race, with Grosjean and Scott McLaughlin collecting top 10 finishes, while Jimmie Johnson had his cleanest IndyCar race to date.

The top 10 finishers from the GMR Grand Prix were:

The NTT IndyCar Series will return to action on May 30 for the series’ flagship event, the 105th running of the Indianapolis 500. Coverage will begin on NBC at 2:30 p.m. EDT.