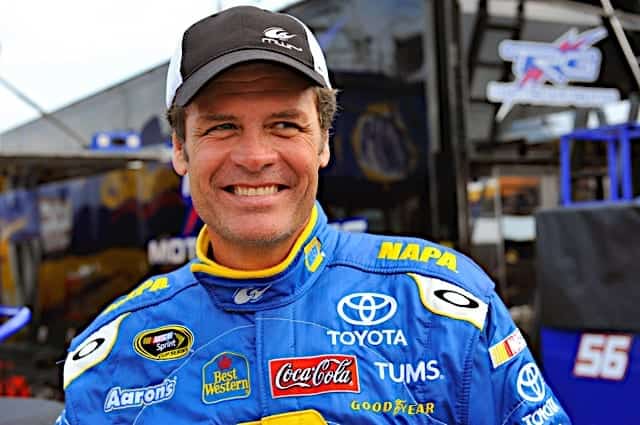 Michael Waltrip is one of 10 full-time drivers participating in the Superstar Racing Experience, a racing series founded by Tony Stewart and Ray Evernham (among others) debuting on June 12, 2021 at Stafford Motor Speedway.

To his name, the younger Waltrip brother has the titles of 2001 and 2003 Daytona 500 champion, as well as the 1983 NASCAR Darlington Dash Series championship. Waltrip won four races during his Cup career, three at Daytona and one at Talladega. The triumphs all came with Dale Earnhardt, Inc., the stable Waltrip joined in 2001.

An edited transcript of our conversation with Michael Waltrip is below, the first in a series of interviews with SRX drivers in the lead-up to its debut. It was originally a part of an interview with Waltrip about the 2019 documentary Blink of an Eye.

See also
Reel Racing: A Conversation with Michael Waltrip on 2019's 'Blink of an Eye'

Adam Cheek, Frontstretch: How excited are you to get behind the wheel of a car again to compete against guys that you raced against for a long time, and what are you looking forward to most about SRX?

Michael Waltrip: Just competing, you know, getting a chance to get out on the track. And I got to figure out how I’m going to warm up. I’m sure there’s a short track somewhere that I could find a ride, [laughs], win a couple races, but just like any competitor, I’m looking forward to getting to race. But then I get a little bit nervous when I think about [making] sure I’m competitive and I can go win one of these or all these races. So it’s going to be interesting to get back up to speed and see how these guys are able to do the same. I’m really looking forward to to getting on the track and racing.

Cheek: You’ve raced against some of them, like Tony Stewart and Bobby Labonte, years ago. Are you excited to compete against anyone in particular in SRX?

Waltrip: I love Bill Elliott, I’m looking forward to racing with him, but I guess maybe one thing [is] that I have a great memory of Willy T. Ribbs giving me a ride around Watkins Glen in a rental car – literally scaring the shit out of me, showing me the track. I’d never been there before. And I can’t wait to have a laugh with Willy about that. I don’t know if I’ve seen him since then.

Cheek: How do you look back and reflect on 33 years of racing in NASCAR’s Cup Series?

Waltrip: At times, I think about what could have been, and I really was looking forward to driving for Dale and, you know, never really got to be with him after the race or break down what I did wrong. And I think that would have … I missed that. But, you know, having a couple of Daytona 500 trophies and being around as long as I have, I’ve been blessed, and I’m thankful for the opportunities that I’ve had.

And I’ll just keep doing TV as long as FOX wants me to, wants to hear me talk and keep spreading the joy, I hope. That’s something that is important to me, no matter what.

Adam Cheek: Where did your interest in broadcasting and commentating come from, and how did you come to focus on the [Camping World] Truck Series? Was it Darrell’s ventures into the booth or was it spontaneous? Maybe a little bit of both?

Waltrip: Well, the TV deal came about just because of knowing that I needed to be able to get my sponsors more value. So, anything I could do to get on TV, to be a part of TV, I thought would bring value to my sponsors. And that’s how it all started, and I think it started back in … I don’t know, it seemed like it was the late ’80s when I pit road reported at, I think it was, Charlotte for MRN. So it goes way back. And it was all just because of wanting to be able to add value to my sponsors. And now I was put in a booth for the trucks, probably, you know, ’06 or so. And [I’ve] been been there ever since, and obviously I’ve done Xfinity as well as as the Cup stuff, was in the booth for the All-Star Race a few years back, even. And so just whatever they ask. I’ve been with Fox, we started that Inside Winston Cup racing show in 1996, me, [Johnny] Benson and [Ken] Schrader. And Fox bought Speed, and that’s now FS1. And I’ve been with Fox since then, ’96 till now, which is kind of crazy. I didn’t even think about that. That’s 25 years, isn’t it? So 25 years of being a part of the Fox team. And that’s pretty cool that they still have me around.

Cheek: Do you have any races that stick out to you that you’ve called, whether it was a memorable finish or anything that just sticks out in your memory?

Waltrip: I don’t know. They seem to all run together, every one of them, when I’m doing it, is the funnest [sic] thing I’ve done lately. It’s always entertaining for me, you know, I love racing. So I love underdog stories, seeing something like [what] happened here Saturday with Ty Gibbs, you know, nobody really saw that coming. Just anytime there’s somebody new or different and thrilled to get a win. That’s fun for me.

Cheek: Speaking of underdogs, Michael McDowell just won the [Daytona] 500. He was with you guys, he drove for you in 2008 and, of course, had that horrific crash at Texas that he walked away from. How do you look back on your time with him and how cool was it to see him win the 500 13 years later after that crash and 20 years after you got your first win?

Waltrip: Yeah, he’s a really good dude. And I’m just happy for Michael and that his peers, the other competitors, really know how hard he’s worked to get that opportunity and what a great job he did driving that car to win that race. And I told him the other day, we were talking and I said, “well, I guess I wasn’t supposed to be known for my Bristol crash and you weren’t supposed to be known for your Texas crash.” And we had bigger things that we had in store, the Lord had bigger things for us. And so we got a laugh out of that and we actually sat down and interviewed him before the race this weekend. And it’s just good to see his smiles and his emotions and you just know how much it means.

Cheek: Whether it was Daytona or Talladega — or even nearly 15 years later after your 2001 Daytona 500 victory — you ran well at superspeedways and you came very close to winning [Talladega] in 2013. People can write off superspeedways as “anyone can win” pretty easily, but what helped you find so much success at those tracks?

Waltrip: You know it’s just it’s crazy. I was just always pretty good at it from the beginning. I could run in the top five at Daytona and Talladega better than I could anywhere else. And my cars, I guess, back in the Pennzoil cars, they just built them, maybe, better for those tracks than we did at other places. And having cars that that I felt comfortable with being competitive in and that I was able to use the air, use the draft and figure out ways to get my way up towards the front. And that really never changed. I was that way, all the way to my last race 33 years later when we ran [at] Daytona and my last race. So just understanding positioning and how the air moves your car around and how you take advantage of that was something that just came naturally for me for some reason.

Nice article. After watching BOAE, I won’t say I like him more, but I definitely respect him more, and wish him success in the SRS series.

I thought the series was called “Superstars”.