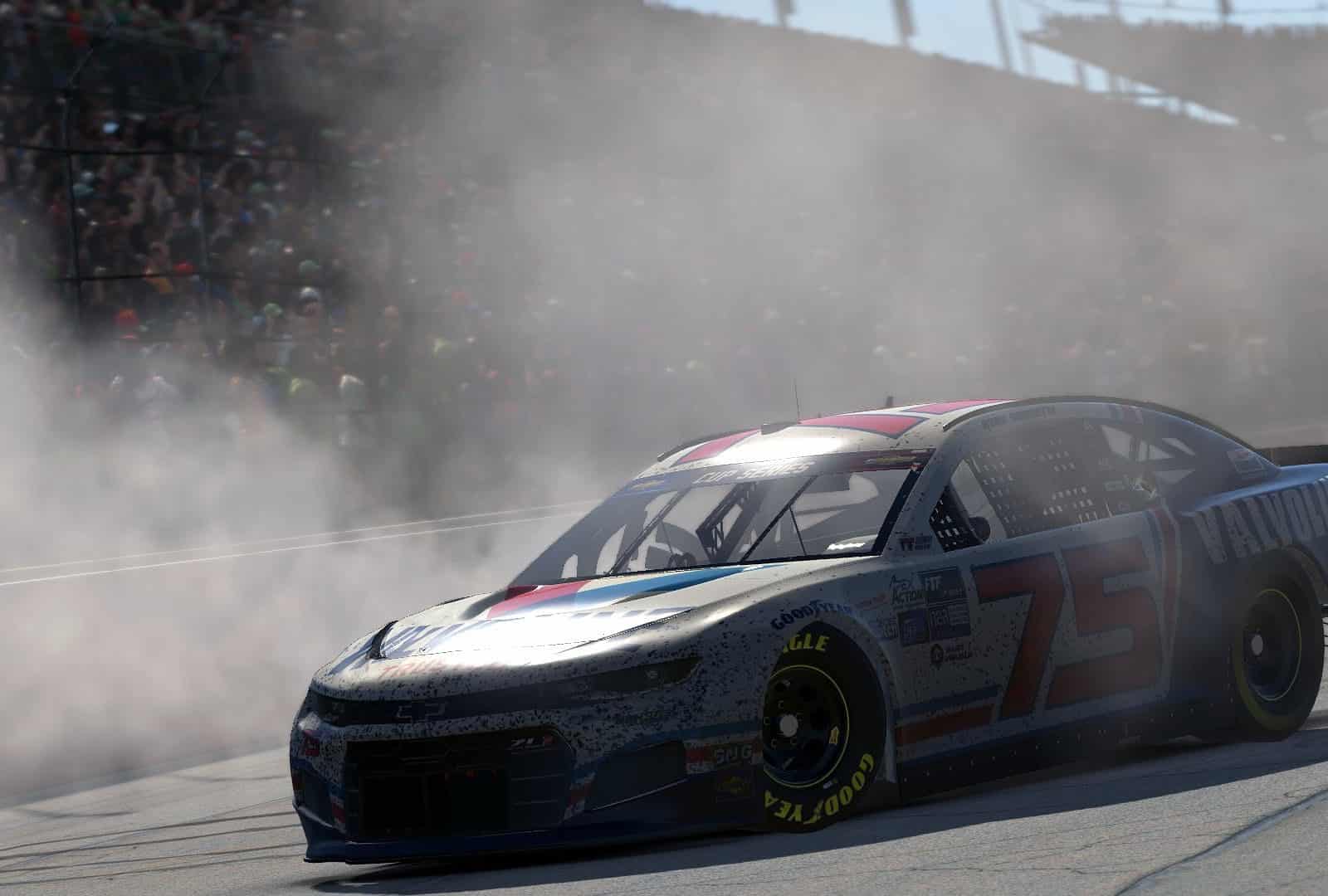 This week in the Virtual Frontstretch, it’s a light week for league updates so we’ll cover some of the recent updates to the iRacing service first.

A patch was released this past week, mostly aimed at road racing for the NASCAR stock cars. All cars and trucks received an update to the tire model. From what I’ve seen, sim racers are mixed on the results. The changes likely came for the upcoming eNASCAR Pro Invitational Series races at both the Circuit of the Americas and at the currently fictional Chicago Street Course.

iRacing also announced official series updates to the road racing side of the service on both asphalt and dirt. The regular road will add four new fixed series to the schedule in Season 3, including the rookie Formula Vee series. The new car that will accompany that will also be free. For dirt road, a new ladder system will see those drivers finally able to try to earn a Class A license in that medium.

Now let’s get into the leagues, where we’ll cover the 100% Cup Series and FTF Cup Series at Darlington as well as the Monday Night Racing series at Watkins Glen.

Kicking off Darlington weekend virtually, the 100% Cup Series danced with the Lady in Black for a full length feature filled with mostly green flag racing. Twenty-nine drivers took the green flag, led by none other than Bryson Hixenbaugh.

Hixenbaugh won the first stage handedly, but the second stage and most laps led on the night went to Robert Miller, making only his third start of the season. Miller eventually fell back to finish fourth as Hixenbaugh went on to capture his third win of the 2021 season.

With the win, Hixenbaugh extended his points lead over Jon Dulaney to 18 as Dulaney finished runner-up on the evening. After 12 races, six different drivers have found victory lane with Adam Benefiel leading that group with four victories.

FTF CUP SERIES: Not Another Throwback Race 400k, May 9

Darlington can be a tricky track, even for some of the best on the service. Even the new wreck score system couldn’t curb the cautions as the Not Another Throwback Race 400k was marred by 14 cautions for 55 laps.

Ryan Doucette took the pole position, Brian Mercurio won the first stage and Kevin King won the second stage. Through the 183-lap event, six different drivers led at one point or another, swapping the lead on 10 different occasions. Many drivers earned their stripe throughout the night, and only two drivers ended the night without any incident points, that being Michael P. Frisch (10th) and Andrew Schwartz (14th)

In the closing laps, Doucette held off a charge from Garrett Konrath to take his first Cup victory of the season in only 11 starts. There have been nine different winners in 12 races so far in 2021. Eight of those drivers are still eligible to utilize their wins toward a playoff berth and seven drivers currently reside in the top 25 in the standings.

We asked everyone NOT to throw it back tonight, and look at this guy @RyanDoucette77! What an ass! Throws it back AND wins. SMH.

Congrats though on your first Cup victory! pic.twitter.com/LBaYCjJLwf

NOT ANOTHER THROWBACK RACE 400K TOP 5

Earlier on Monday, it was announced that NAPA would be joining Monday Night Racing as the presenting title sponsor for the new season. To kick-off the new partnership, MNR brought back a classic event from the previous two seasons.

The second race of the third season was a big contrast from the first race a week ago at Daytona. Thirty-six total Pro 2 Trucks took off from a standing start at Watkins Glen International and for the most part, they kept it clean through the majority of the race.

A halfway caution at lap 20, fuel tanks that lasted for at most 13 laps, and only two extra sets of tires set the stage for what eventually turned into a beat down by Australian Supercars champ Shane van Gisbergen.

Van Gisbergen led 30 of the 40 laps in the event, winning by more than four seconds over the defending series champion and defending race winner Will Rodgers.

DJ Cummings leads the standings after two races over Anthony Alfredo. Kyle Busch made his first start of the season and rounded out the top 5 behind van Gisbergen, Rodgers, Adam Cabot and Stefan Wilson.

.@Supercars champion, Shane Van Gisbergen (@shanevg97) talks with @JamesVPike of @PodiumeSports on his dominating performance at @WGI and how MNR is such a "fun league". pic.twitter.com/BWyIBsVHME

Also, check out the post race rundown with myself and Michael Massie: https://youtu.be/6RCCXb4h1i8

100% Cup Series will be racing at Dover on Saturday night at 8:30 p.m. ET. The replay will be available on 3 Wide TV as the race will already be completed by the time this article is posted.

FTF Racing will also be at Dover, going live at 8:00 p.m. ET on BottomSplit.

Monday Night Racing will get dirty on Monday night, heading back to the Bristol dirt track in the Camping World Trucks at 8:00 p.m. ET on Podium eSports.

Finally, the multiple official series on the schedule will be firing on all cylinders next week. The eNASCAR Coca-Cola iRacing Series will go off on Tuesday night at 9:00 p.m. ET (iRacing social channels) and the eNASCAR Pro Invitational Series will be on FOX Sports 1 at 8:00 p.m. ET, both series racing at Circuit of the Americas. eNASCAR Road To Pro will be on Thursday night at Charlotte on Podium eSports and STN Racing.