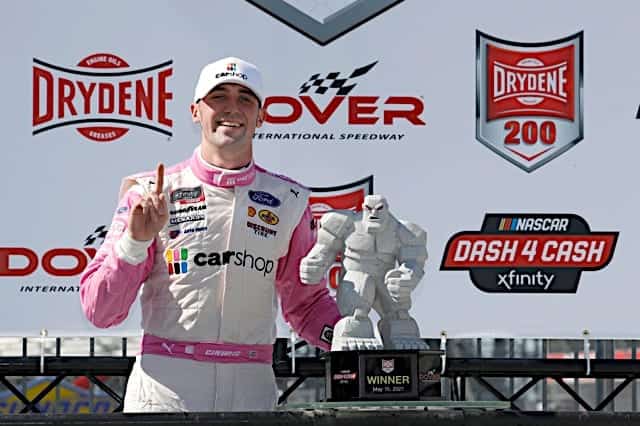 Austin Cindric didn’t look to be a significant threat to win Saturday’s Drydene 200 at Dover International Speedway until a restart with 56 laps to go. For the first three-quarters of the race, JR Motorsports teammates Justin Allgaier and Josh Berry held the top two positions. Berry was the control car when the race restarted with 56 to go with Cindric pushing him. Veteran Allgaier had a quick-firing car and took the lead from Berry on the restart. A couple of laps later, Cindric disposed Berry for second place and set his sights on Allgaier. Cindric convincingly seized control of the race with 51 laps to go from Allgaier. All Allgaier, Berry, and the rest of the front runners could do was watch Cindric grow smaller and smaller in their windshields.

The focus of the race then turned to the Xfinity Dash 4 Cash, which came down to Allgaier and Berry. Lapped traffic played a role with Berry repeatedly catching Allgaier at inopportune times. Eventually, Berry found his way around Allgaier with 29 laps to go and went on to finish second, claiming the $100,000 bonus.

Allgaier finished third, with AJ Allmendinger and Ty Gibbs closing out the top five. Noah Gragson was a contender for the Dash 4 Cash, winning the previous three this season after his team won the appeal for the Darlington disqualification earlier this week. He finished 15th after pitting on the final lap, and Brandon Jones was involved in an accident in stage two, relegating him to a 35th place finish.

We’ve known for a while that John Hunter Nemechek would be driving for Sam Hunt Racing this weekend at Dover, but nobody probably expected him to run inside the top 10. That’s what JHN did. Nemechek stepped into a car driven by four different drivers through the first nine races in 2021, and he started 30th. It didn’t take him long to get acclimated to the No. 26 SHR Toyota as he was quickly inside the top 15. He collected 10th and 8th place finishes in stages one and two. But unfortunately, with just over 60 laps to go, his car suffered a track bar failure. The track bar failure dashed the hopes of a well-earned top-10 finish for Sam Hunt Racing. Santino Ferrucci has shown glimpses of top 10 performances for SHR earlier this season, but Nemechek’s performance confirmed that this team is ready to aim higher.

While many will be upset that one of the two dominant cars didn’t win Saturday’s race, the Drydene 200 was an example of why you watch the race to the end. Cindric was a top-six car for most of the race, but on the final restart with 56 laps to go, he challenged the JR Motorsports duo of Allgaier and Berry. There are many reasons why Allgaier and Berry’s cars weren’t the fastest in that final stint, but Cindric’s crew made the right changes to his Ford Mustang to power his way to victory. They knew what they were chasing while Allgaier and Berry didn’t. Cindric is rarely going to be a surprise winner. Today was one of those rare occasions.

It wasn’t meant to be for Zane Smith, who was filling in for Justin Haley, as Haley was sidelined due to NASCAR’s COVID-19 protocols. Smith started at the rear of the field. He quickly found himself inside the top 20 but experienced brake issues, which came to a head on lap 67 when his Kaulig Racing Chevrolet lost all braking power, right as Brandon Jones came down and across his right front. The cars plowed into the outside retaining wall in turn one, ending both their days.

Dover finds a way to surprise us with wild accidents from time to time. Sometimes they even rival those found at Daytona or Talladega. Dover doesn’t typically produce wrecks that end with a car parked on the hood of another, with nearly all four tires off the ground. On lap 57, Jesse Little went spinning to the inside as he exited turn two. Josh Williams spun towards the outside after getting tagged in the rear, then down towards the inside wall. Matt Jaskol checked up, and Joe Graf Jr. didn’t. Jaskol spun to his left with his passenger side nearly parallel with the inside wall. His No. 13 Toyota then backed up and over the hood of Little’s Chevrolet, where it came to rest. Thankfully all three drivers walked away and were treated and released from the infield medical center.

JJ Yeley wheeled the No. 23 Chevrolet for Our Motorsports to a 14th-place finish, the first time that car has finished inside the top 20 since Tyler Reddick finished 12th at Las Vegas Motor Speedway in March. Teammate Brett Moffitt (13th) was inside the top 10 for a while but, in general, struggled for much of the race. Yeley was inside the top 20 for much of the race, an improvement on the No. 23 Chevrolet’s performance from recent races. But throughout most of the season, the No. 02 has handily outpaced the No. 23. To see the No. 23 finish within earshot of Moffitt, even on an average day, is good to see.

Josh Berry is the unexpected Double Duty Interloper this week, as he will serve as Justin Haley’s substitute in Sunday’s Drydene 400. Berry finished second after leading 48 laps and collecting the $100,000 Xfinity Dash 4 Cash bonus. The No. 77 Spire Motorsports Chevrolet will line up 29th in Sunday’s Cup Series race at Dover, but Berry will have to drop to the back due to the driver change, per NASCAR rules.

“I love this racetrack (Dover) more than anywhere else we go to! I hate to admit it, but I love it!” – Austin Cindric

“It’s Dover. Once you’re sideways coming out of the exit, there’s really not much to do.” – Jesse Little

“My spotter, Stephen Leicht, said ‘back it down.’ We did. Didn’t even lock up the brakes, and I guess somebody got into the back of really big, unfortunately.” – Matt Jaskol

I pointed out last weekend that Austin Cindric and Team Penske had cooled over the previous month and a half. Today demonstrated why they are the defending Xfinity Series champions. The team continued to improve on their car, and when Cindric saw his opportunity to strike, he gave it all that it was worth. After 10 races in 2021, that is win number three. At this point last season, Cindric had zero wins and zero wins on ovals.

But Josh Berry has impressed once more. I can’t see him leaving the Chevrolet family, and if JR Motorsports isn’t able to put a fifth car in the field, even for select races, I hope to see Berry in a few races with Richard Childress Racing or Kaulig Racing before season’s end. He has adapted well to the Xfinity Series and has taken it to the biggest names. It would be a shame not to see him in another race this season after Nashville Superspeedway in June.

The NASCAR Xfinity Series packs up and heads to Austin, deep in the heart of Texas. For the second time in 2021, the Xfinity field will make left and right turns, but it will be for the first time at the 3.426-mile road course, Circuit of the Americas. The Pit Boss 250, a 46-lap race, will go green at 4:00 p.m. on FS1 and PRN and will include qualifying, meaning only 36 cars will make the race. After COTA, the following three Saturdays will see the series race at Charlotte Motor Speedway (May 29), Mid-Ohio Sports Car Course (June 5), and Texas Motor Speedway (June 12).